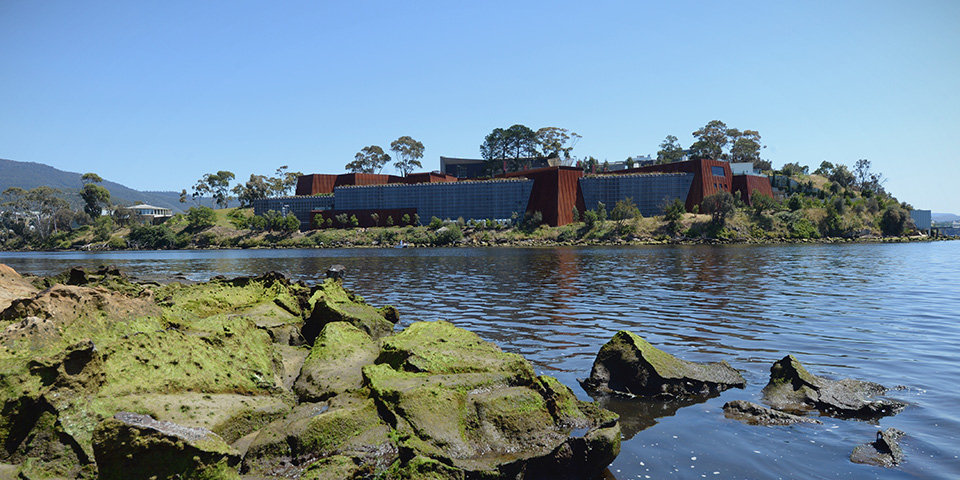 The unassuming building that houses the Museum of Old and New Art, on the banks of the Derwent River in Hobart. Photo: AAP
analysis

There it was again, tucked away in a set of statistics, Tasmania doing markedly better than the rest of the nation. That’s Tasmania – Australia’s perennial basket case.

This time it was international tourist numbers with Tasmania boasting by far the nation’s fastest growth rate, up 15 per cent in the year to September compared with 5.6 for the nation. (Second place went to the ACT with 9 per cent growth – presumably adventure travellers lured by talk of coups.)

But international tourism growth is only one of the fields where little Tassie now outperforms other states.

An economic scorecard published by the Tasmanian Treasury shows real Gross State Product per capita growing by 2.3 per cent over the past year, nearly double the overall Australian figure of 1.2 per cent.

Rental vacancies in Hobart are so low as to be within the margin of error – no wonder building approvals and housing prices are still rising there as they fall elsewhere.

The island state’s boom has not come from nowhere. The first real evidence that something was afoot was in the NAB business conditions and confidence survey in 2015, which began to show Tasmania soaring above other states.

At first it looked like a statistical aberration – a small sample size in a small state couldn’t be trusted. But the outperformance continued.

I had a suspicion about what had happened and three years ago consulted Tasmania’s economist-in-residence, Saul Eslake, for confirmation.

Yes, the weaker Australian dollar benefitted Tasmania proportionately more than the mainland, but what had really made a difference was a single individual’s dream of a dramatically different art gallery – David Walsh’s Museum of Old and New Art, Tasmania’s biggest tourist attraction.

“MONA certainly has made a difference, not only in terms of the number of visitors it attracts but it has also prompted a significant improvement in the quality of restaurants and coffee shops catering to the requirements of the more ‘upmarket’ visitors who come to Tasmania for an arts and cultural experience as opposed to the more traditional type of tourists,” Eslake told me.

“It has prompted Qantas to put on more flights to Hobart from both Melbourne and Sydney, reversing what had been a trend towards completely Jetstar-ising Tasmania. There is now also something of a hotel-building boom beginning to get under way.”

It has continued and fed upon itself. The sort of people prepared to travel from the other side of the Earth, let alone the mainland, to visit an art gallery will demand a better meal and accommodation. And as they get it, word spreads there is a superior experience to be had, attracting more people.

And MONA has continued to grow beyond being a museum with beer and wine. First with MONA FOMA (Festival of Music and Art) and then with Dark Mofo, Walsh’s arts dream has changed at least the bottom half of Tasmania.

The state is running with it. The biennial Ten Days on the Island multi-arts festival in March has been reimagined by artistic director Lindy Hume for all of the state, rolling over three weeks through the three regions of north-west, north-east and south.

Tasmania still has a long way to go to catch up with the mainland on key metrics. As I partially wrote in 2016, Tasmania remains the island down the bottom that is sometimes left off the map; the one we joke about giving to New Zealand but the Kiwis don’t want it because they play odd football and the Melbourne people who control that odd football treat it with neglect.

It’s the place you reach by time travel going back half a century, Australia’s underachiever, the place that shouldn’t really be a state at all with its 12 often-troublesome senators for a population smaller than the Gold Coast.

Wages and GSP are growing faster in Tasmania than the mainland, but they’re coming off a lower base and are well behind, as is educational attainment. The north-east in particular has missed out on much of the Hobart-centric MONA effect.

The inspirational point of the MONA/Tasmania/arts story is that change and growth can come from left or right field, not from “always doing what we’ve always done around here”.

Regional arts and entertainment can achieve much in a richer, more service-and-experience-oriented world.

If Dark Mofo can convince people to travel to Tasmania for the winter solstice with outdoor events, you can do anything.

How a dream turned around our worst state