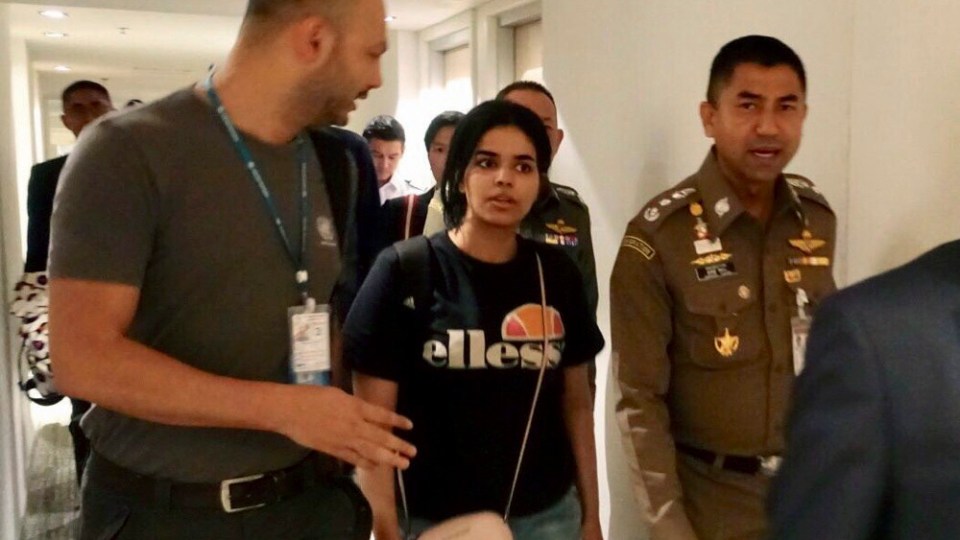 The 18-year-old Saudi woman said she was escaping her family. Photo: AAP
exclusive

The Saudi teenager who barricaded herself in a Bangkok airport hotel and begged for asylum from Australia could have her wish granted.

Australia confirmed on Tuesday night that it was deeply concerned about the plight of Rahaf Mohammed Alqunun, 18, and confirmed it would likely grant her a humanitarian visa – if the United Nations High Commissioner for Refugees (UNHCR) determined her claims are genuine.

However, her case has also raised questions over why Australia has moved so swiftly to open the door for refugee protection for the social media-savvy teenager as thousands of other asylum seekers languish without resettlement.

“The Australian government is pleased that Ms Rahaf Mohammed Alqunun is having her claim for protection assessed by the UNHCR,” a spokesperson for the Department of Home Affairs said.

“The government has made representations to the Thai government and the Bangkok office of the UNHCR about its serious concerns on this matter and the need for Ms Alqunun’s claim to be assessed expeditiously.

“Any application by Ms Alqunun for a humanitarian visa will be carefully considered once the UNHCR process has concluded.”

“We are very grateful that the Thai authorities did not send back Ms Alqunun against her will and are extending protection for her,” Mr de Vincentiis said on Tuesday night.

“It could take several days to process the case and determine next steps”, he added.

“For reasons of protection and confidentiality we are not in a position to comment on the details of individual cases.

The unusual decision to open the door to protection for the teenager followed fury from activists who feared Australia had cancelled her tourist visa.

I seek protection in particular from the following country
Canada/United States/ Australia /United kingdom, I ask any if it Representatives to contact me.

Ms Alqunun, who said she has renounced Islam, claimed she was beaten by her brother, forced to pray and wear a hijab, and was terrified of her father, a powerful Saudi governor.

“I’m afraid, my family WILL kill me,” she said on Twitter.

Ms Alqunun fled a family holiday on Kuwait this month, before boarding a plane to Australian via Bangkok.

But when she arrived she claims a man was waiting with her name written on a placard who promptly confiscated her passport. She has also claimed her father subsequently arrived at the Thai airport.

“My life is in real danger if I am forced to return to Saudi Arabia,” she said.

Renunciation of Islam, known as apostasy, is punishable by death in Saudi Arabia.

Ms Alqunun’s father and brother have arrived in Thailand, but as of Wednesday morning she was refusing to see them.

A family spokesperson told the BBC that they did not wish to comment and all they cared about was Ms Alqunun’s safety.

“We have no idea what he is going to do … whether he will try to find out where she is and go harass her,” Mr Robertson told Reuters.

“We don’t know whether he is going to try to get the embassy to do that,” he said.

“Rahaf al-Qunun-mark my words,is going to start a revolution in Saudi Arabia.Go on social media now & watch accounts of so many young Saudis saying,“Rahaf,you’ve shown us,that we can do this! Rahaf, you have shown us,that we deserve to be free”
pic.twitter.com/4VG2rKnGQ5 #SaveRahaf

Feminist Mona Eltahawy said the case was a reminder not to forget the women of Saudi Arabia currently being tortured, rape and killed as they fought for freedom.

“(Her) plight appears to be the direct result of Saudi ‘guardianship’ laws that apply to women from cradle to grave.”

In a series of tweets on Monday, Ms Alqunun claimed she was abducted and that Saudi Arabian diplomatic staff confiscated her passport on arrival at Bangkok’s Suvarnabhumi airport.

The teenager vowed to not leave her hotel room until she spoke with the UNHCR.

She later tweeted that she felt safe under UN protection and her passport had been returned.