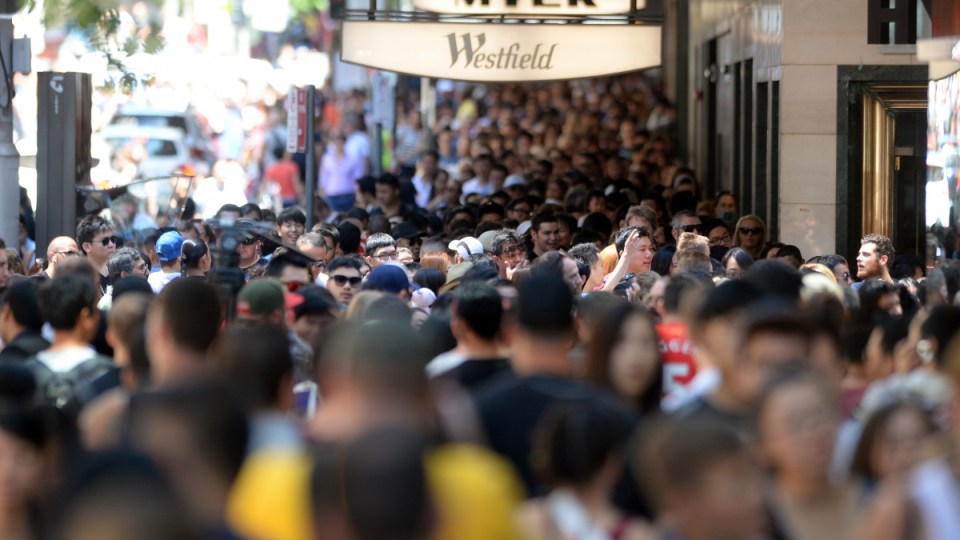 The government has acknowledged a "softer" economy, but says it will pick up in the latter half of the year. Photo: AAP

Aussie bargain hunters are expected to splurge $2.5 billion in the Boxing Day sales.

The Australian Retailers Association says it will be the biggest trading day of the year and marks the start of the traditional post-Christmas sales period in which customers will shell out over $18 billion from Boxing Day to January 15.

In Melbourne, free coffee was on offer for crowds queuing up in the Bourke Street Mall and David Jones offered a $100 voucher to the first 100 in line.

Leading the queue was a woman who arrived about 2.30am, earning herself a $500 store voucher and the chance to ring the bell to mark the store opening.

“She drove up from the Mornington Peninsula, she was very keen,” David Jones spokeswoman Morgan Hill said.

The store, which had about 400 waiting in line before the doors flung open, expects to sell a million mens’ business shirts online and in store nationally on Wednesday.

ARA and Roy Morgan are forecasting a 3.1 per cent increase in post-Christmas sales, and predict Aussie shoppers will spend in excess of $2.5 billion this Boxing Day both in-store and online.

NSW shoppers are projected to take the lead, spending around $790 million on Boxing Day, followed by Victoria on $786 million.

For Sydney’s Craig Farrugia, the Boxing Day sales are so good that it’s worth skipping the giving of gifts on Christmas Day.

He and his partner Malika Orfanos left home at 4am on Wednesday to join a queue of dedicated shoppers outside Myer in Pitt Street Mall.

By 7am, they’d spent about $400, and Mr Farrugia told AAP he was just getting started.

“We’ll probably spend close to a couple of grand today,” he said.

With the South Australian government legislating Boxing Day trade across all parts of the state, the ARA suspects SA retailers will notice an exponential growth in sales.

Online retailers should also ensure their e-commerce and social platforms are able to handle the influx in website traffic, he added.

“While online customers will be rushing to add items to their shopping carts, physical retailers will be experiencing a high volume of customers dashing to the registers,” Mr Zimmerman said.

He urged customers to be patient and co-operative with retail staff during the expected mayhem.

“At the end of the day, retail workers are people too. Staff in retail stores are there to help and should not be made the target of bullying, abuse or harassment.”