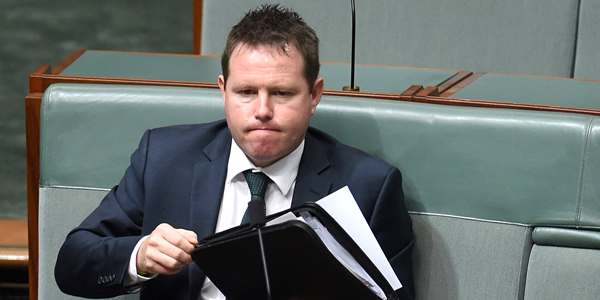 Andrew Broad will quit parliament at the next election. Photo: AAP

Victorian MP Andrew Broad will not contest the next election following the fallout from the “sugar babe” sex scandal that has already cost him his front bench role and triggered a police investigation.

The married MP has said he called in federal police after the woman – who uses the alias “Sweet Sophia Rose” – asked him for money following their “sugar daddy” date in Hong Kong.

The New Daily understands that Mr Broad declined her request. Police found no evidence of a crime being committed.

Mr Broad embarked on his fateful and inauspicious trip to Hong Kong to meet the woman within days of being appointed to the ministry in August. He also texted her to inform her of his “big promotion”.

Mr Broad told The New Daily on Monday he had paid for the international trip himself. He did use taxpayer funds for the Mildura-Melbourne leg, and said he was happy to repay if required.

He quit his front bench role as assistant minister to the Deputy Prime Minister on Monday, shortly after news of the scandal emerged in New Idea magazine.

It’s understood that Mr Broad offered to quit Parliament on the spot, sparking a by-election in his safe Nationals seat of Mallee. That is a prospect Prime Minister Scott Morrison would not be keen on, given the tight numbers in Parliament.

Instead, Mr Broad announced on Tuesday that he would not contest the next election.

“I have informed the president of the Victorian division of the Nationals that I am withdrawing my nomination to contest the division of Mallee at the next federal election,” he said.

“After recent media stories about my private life, it is clear that the people of Mallee will be best served in the next parliament by a different Nationals candidate.”

Mr Broad acknowledged he had let his family, party and community down.

“I have done my best and, at times, we have achieved good things, but I have also let them down.

“I hold a deep love for regional Australia.I will continue to work tirelessly for my community as their local MP until the next election.”

By remaining in Parliament, he will maintain an annual salary of $200,000 until the May election. The compromise plan should net him about $85,000 before tax.

Mr Morrison was blindsided by the scandal when it emerged on Monday. He learned of the police investigation only after reading New Idea.

The magazine also alleged that Mr Broad told prospective dates: “I’m an Aussie lad, I know how to ride a horse, fly a plane and f–k my woman. My intentions are completely dishonourable”.

Mr Broad told The New Daily that his trip to Hong Kong was to do with electorate work and was privately funded.

Earlier, Deputy Prime Minister Michael McCormack called on Mr Broad to “consider his future” as the member for Mallee but insisted the Nationals do not have a problem with women.

“I think he should consider his future. I do,” Mr McCormack said.

Mr Broad has previously opposed same-sex marriage and compared homosexuals with “randy rams”. He said the fallout from the “sugar baby” scandal was a private matter between himself and his wife, and he would not discuss it publicly.

Mr McCormack said there was no reason for him to resign as Deputy PM for failing to alert Mr Morrison to the impending scandal when he learned about it five weeks ago.

“I thought it was a personal matter between him [Mr Broad] and his family,” he said.

“I don’t tell the Prime Minister everything about every member of Parliament. He’s got enough on his mind at the moment and, quite frankly, I thought it was a matter for Andrew to sort out.”

Mr McCormack assured Australians that he had consulted both of the women in his parliamentary party of 22 MPs and senators.

“The women in my party – Bridget McKenzie, my deputy leader, and Michelle Landry – are ministers and, certainly, the women’s council of the National Party are doing a fantastic job.”