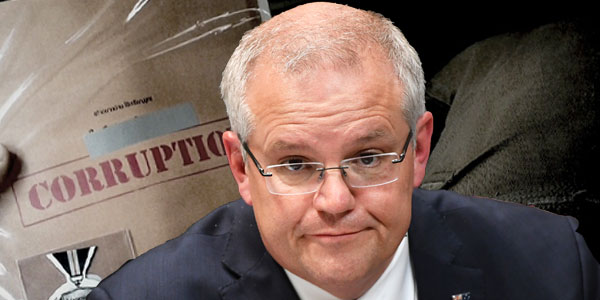 The PM says the government has been working on the new Commonwealth anti-corruption commission for months. Photo: The New Daily

Scott Morrison says the planned national integrity commission to fight political and public service corruption will not be a “kangaroo court”.

The new investigative body, to be known as the Commonwealth Integrity Commission, will be charged with investigating politicians, public servants and law enforcement officials.

However, it will not conduct public hearings or make public findings into MPs, to avoid NSW-style “show trials”.

“It is not a body that will conduct public hearings and it will not write reports where it makes findings of corruption on a piece of paper against an individual,’’ Attorney-General Christian Porter said on Thursday.

“It is an investigative body, with serious investigative tools, that is well-resourced, specialised and the peak body for building briefs against people who have acted corruptly … This is not a show-trial body.”

Instead, Mr Porter said the CIC would investigate and refer potential criminal conduct to the Commonwealth Director of Public Prosecutions.

“This approach ensures that it is the courts that make findings of criminally corrupt conduct,” he said.

The commission will have the power to hold public hearings through its law enforcement division.

The proposals will also create a new offence of aggravated corruption by a public sector official and a new failure to report corruption offence.

Morrison's proposed Fed Integrity Commission – no hearings, no reports, to be nothing like NSW ICAC.

At face value, it represents a backflip by the minority Morrison government, which has publicly argued against Labor and Greens proposals for a federal ICAC for months.

During the final sitting weeks of the parliamentary year, Mr Morrison described it as a “fringe issue” being pushed by the opposition. Earlier in 2018, former PM Tony Abbott told Sydney radio an anti-corruption commission was a “very, very bad idea” that had come from the Greens and been adopted by Labor.

The issue was also divisive within the Coalition. Several of its MPs, including Queenslander Llew O’Brien, had threatened to cross the floor and vote with Labor on an ICAC.

On Thursday Mr Morrison confirmed reports the government had been quietly working on the complex proposal for months, including during Malcolm Turnbull’s time as leader.

“We actually have a formally, carefully considered proposal, unlike the Labor Party who are yet to even define what on earth it is they’re talking about,” Mr Morrison said.

This is a real proposal, with real resources, real teeth, but one that I think protects our Commonwealth.’’

Labor leader Bill Shorten said it was too little, too late.

But Mr Morrison said the new body would not be a “kangaroo court’’, pointing to what he described as the failures of NSW’s Independent Commission Against Corruption.

“There’s a litany – a litany – of cases there which didn’t come close to best practice. And … it has been the lesson in what not to do,’’ Mr Morrison said.

“I have no interest in establishing kangaroo courts that, frankly, have been used, sadly, too often for the pursuit of political, commercial or bureaucratic agendas in the public space. I think those exercises have sought to undermine public confidence, not improve it.”

His announcement was not greeted with universal praise. New Independent MP for Wentworth Kerryn Phelps said she expected any new body to have proper investigative powers.

Mr Porter said the first step in assessing whether a national integrity commission was necessary and how it should run was to map all existing Commonwealth integrity arrangements.

“There was something missing and that something was a single, dedicated, specialist and peak body to investigate criminal corruption across the public sector,’’ he said.

This would cover the public sector, including all departments, agencies, their staff, parliamentarians, and their staff, staff of federal judicial officers, as well as Commonwealth service providers and recipients of Commonwealth funds.

“That is to say organisations like the NDIS, organisations that contract with the government … a very large number of people where there’ll be coverage” Mr Porter said.

Integrity commission will be no ‘kangaroo court’: PM