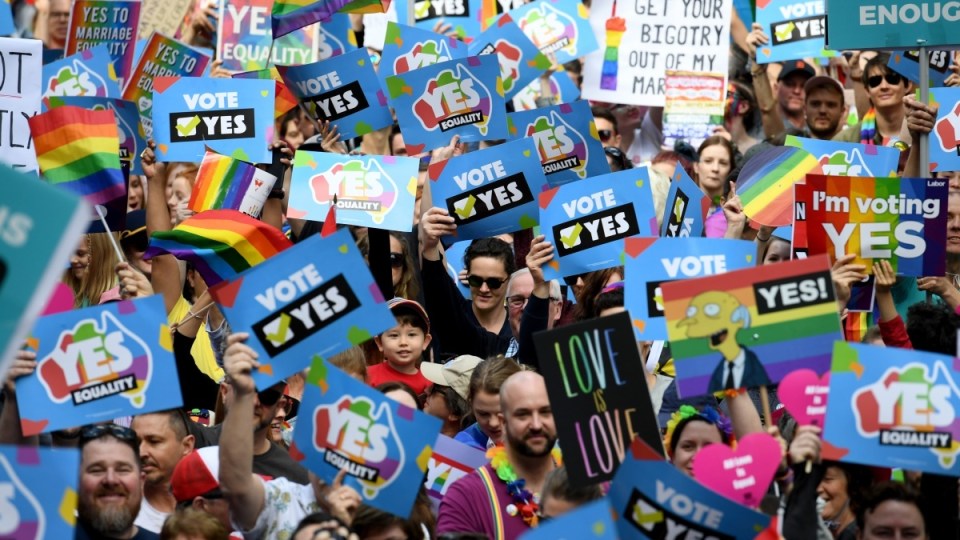 Marriage equality though the overwhelming 'yes' vote ended the issue once and for all. Photo: AAP

The Archbishop of Sydney has cited the threat of state laws to force priests to disclose child abuse revealed under the seal of the confessional as an example of an attack on religious freedoms, welcoming the Morrison Government’s new discrimination laws.

While the Attorney General maintains the new federal laws will not override state criminal laws including those demanding child abuse be disclosed, Archbishop of Sydney Anthony Fisher cited the example as an attack on religious freedom.

“We used to be live and let live on religious matters,” he said.

“We gave each other space to be different, but lately there has been a hard-edged secularism that wants to stamp out religion from public life,” he said.

“There have been attempts in some states to legislate on the Seal of Confession.

“People of faith must be able to freely practise their religion without fear.”

In the wake of the Royal Commission into child sex abuse, South Australia, Tasmania, the ACT and Western Australia have all made moves to require clergy to report child abuse.

In a letter to priests this year, Archbishop Fischer warned they must “resign themselves to punishment, even martyrdom, rather than break the seal of the confession; the faithful likewise expect this of them.”

The author of the religious freedom report, Philip Ruddock told The New Daily it was not a problem considered by his report. However, he argued it was possible for the Commonwealth to override state laws if it chose to do so.

“The seal of the confessional is a different issue and it doesn’t arise in our report. We didn’t comment on that matter,” he said.

“I simply make the point that the Commonwealth, in implementing our treaty obligations, which do engage with the protection of religious freedom can, if it so desires, use that as a basis for ensuring Commonwealth laws override the states.

“But there is no suggestion, as I have read it, that the Commonwealth is seeking to do that.”

Australian Catholic Bishops Conference president Mark Coleridge has argued there is no compelling evidence that the legal abolition of the seal of the confessional will make environments safer for children.

Melbourne Archbishop Peter A. Comensoli also welcomed the release of the Religious Freedom Review, which he predicted would become a “focal point for the ongoing debate about religious liberty in Australia.”

Declaring Australians are “not a godless people” the Prime Minister announced he will introduce new religious discrimination laws on Thursday.

But he also confirmed that his pledge to ensure gay kids cannot be discriminated against at school will be delayed, citing an inability of Parliament to resolve the issue.

His announcement follows months of delays over the release of the Ruddock report, which the government first received on May 18.

“For those who think that Australians of religious faith don’t feel that the walls have been closing in on them for a while, they’re clearly not talking to many people in religious communities or multicultural communities in Australia,’’ Mr Morrison said.

“I remember a conversation I had with one such community in Western Sydney and they said they left where they came from to come to Australia because of religious persecution in the countries they were living in. And that made me incredibly sad.”

Mr Morrison is proposing a new religious discrimination regime, confirming the drafting of the laws is well-advanced and should be released next year, before the May election.

But his pledge to remove exemptions that allow discrimination against gay students will have to wait, despite promises to deal with the issue swiftly after recommendations from the Ruddock report leaked during the Wentworth by-election.

Mr Morrison’s political gamble over turning the highly charged issue into a potential election fight has angered gays and lesbians who remain furious that their private lives were debated in the postal plebiscite.

Rainbow families Victoria Felicity Marlowe said gay and lesbians were sick and tired of having their private lives up for public debate.

“I am very concerned that once again our children and our families will become the political punching bag by anti-LGBTIQ campaigners, many of whom seem to think that we remain a threat to religious freedom and the institution of marriage and the family. This obsession with our lives, relationships and families is becoming ridiculous and more dangerous by the day,’’ she told The New Daily.

“Mr Morrison’s decision to push the issue of LGBT students and staff in faith-based schools, along to another review, only serves to what seems like endlessly prolong the unnecessary public scrutiny on our families and our children.”

However Mr Morrison insisted that he knew of no schools that were using the exemptions to discriminate against gay kids.

“What I do also know of is that there’s not one religious school that I’m aware of who would seek to expel any child on the basis of their sexuality,” he said.

Conservatives are also concerned with the laws, with SA Senator Cory Bernardi insisting Australia did not need more bureaucracies and tribunals that he said could allow Muslims to attend Jewish schools and then complain about being taught religion.

Campaigner for the “No” vote during marriage equality and Queensland Senate candidate Lyle Shelton said the proposed religious freedoms laws and a new religious freedom commissioner would only set up further conflict.

“It will be lawyers at five paces. That’s not the Australian way – we want to live and let live respecting difference and diversity,” he said.

“Freedom needs to be protected – including and especially the right to dissent from the rainbow gender-fluid world view.”

Labor frontbencher Mark Butler said the ALP was not opposed to separate religious discrimination laws but was disappointed the Prime Minister had waited so long to resolve the issue.

“We have been quite clear that we understand the need to protect the rights to practice faith freely and without discrimination,’’ he said.

“That’s what we should have been debating over the course of this year. Instead, Prime Minister Turnbull and then Prime Minister Morrison have sat on this report for more than six months.”