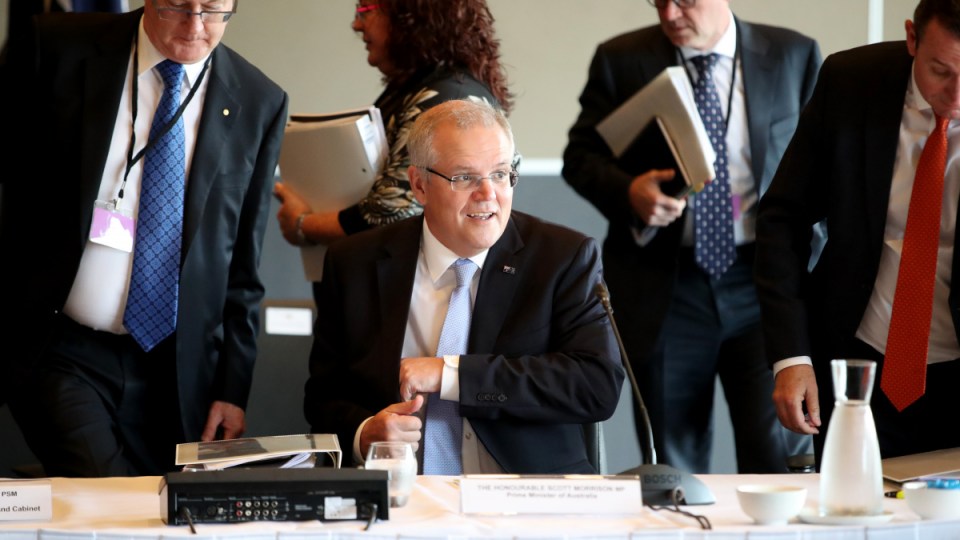 Prime Minister Scott Morrison has emerged from Wednesday’s COAG talks in Adelaide with an agreement to work with the states to develop a national population plan.

All states and territories will submit their population requirements by January 31.

“The next decision that has to be made, at least in terms of immigration, is what the annual intake cap will be for the 2019-20 year. And that decision is taken in the budget every year,” the Prime Minister said.

“So what I’ve sought from the states and territories is input and framing the intake for the next year and the cap.”

Earlier, the Prime Minister’s hand-picked immigration expert Professor Peter McDonald had told state premiers at COAG that cutting migration will hurt the economy, a disclosure that officials claim prompted laughter after Mr Morrison’s calls for a cut to immigration.

A spokesman for Mr Morrison said the laughter was a “complete fabrication”.

Queensland Premier Annastacia Palaszczuk said it was clear from Professor McDonald’s presentation that a cut in immigration numbers was not the answer.

“It has to be maintained, if not increased. That’s what I got out of the presentation,” she said.

Afterward, the emeritus professor of demography at the Australian National University confirmed he did not support reduced immigration numbers.

Australia’s migration program is capped at 190,000 for the 2018-2019 year. That figure includes all skilled, family and special cases of migration.

“If it dropped to 70,000, we wouldn’t have any skilled migration at all,” Professor McDonald said.

Professor McDonald also predicted cutting migration to Sydney and Melbourne would be pointless. He said other Australians would simply move to our two biggest cities to get jobs.

“Which people are already doing, but on a larger scale.”

Professor McDonald said migration was vital because of Australia’s ageing population. Maintaining it at its current level would boost Australia’s per capita gross domestic product by 12 per cent.

“That was by 2050 – through the impact of immigration on the ageing of the population,” he said.

“Immigration tends to concentrate the population more in the working ages, and that flows through to affect GDP per capita.”

“In the next decade, Australia is facing a labour supply crunch. We’ve got about two million workers leaving the workforce, retiring – that’s the baby-boomer generation,” he said.

“Because of the lower number of births, and in the 1990s people stayed in education longer … we have a real labour supply crunch and the only way we are going to deal with that is through migration.”

He is backed by NSW Premier Gladys Berejiklian, who wants to slash immigration to the state by half.

“In a state like South Australia, you want more people,” Mr Morrison said.

“In states like NSW and Victoria, we need to manage that growth because the congestion impacts in Melbourne and Sydney are affecting the quality of life.”

“Growth is good when it’s properly managed,” she said.