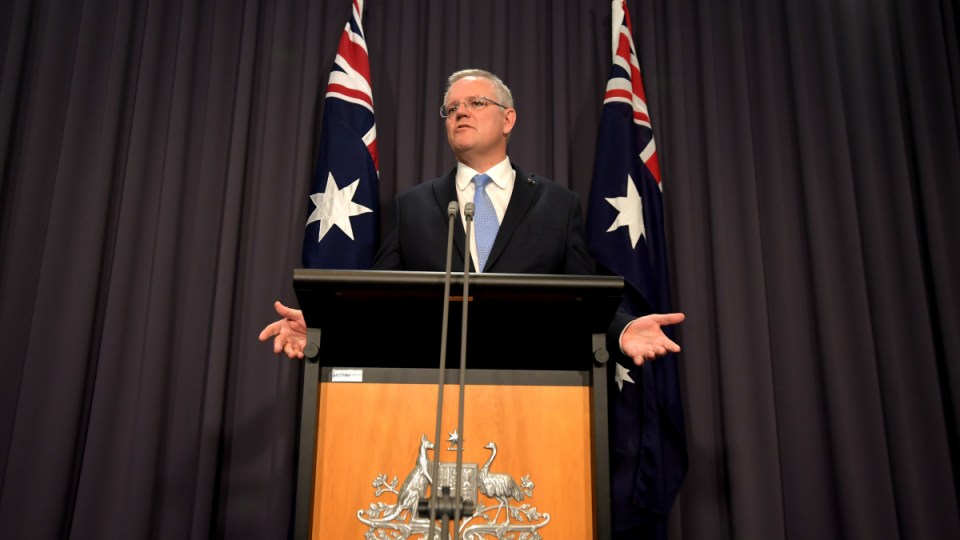 A new report has found Australians care a lot more about politicians lying to them than US voters. Photo: Getty

Scott Morrison is facing the equivalent of a political Sophie’s choice: Go to an election in March to avoid defeat in Parliament or wait until the last minute, see out the term and go to the people in May.

Either way he is confronted by the prospect of a significant loss at the polls.

In William Styron’s novel, the character Sophie was faced with the choice of allowing one of her children to be killed in the Nazi gas chambers and the other to live. Either way her loss was devastating.

Back in their electorates, Liberal MPs are being confronted with indifference or hostility that convinces them they are staring down the barrel of defeat. The only question is how harsh will be the punishment meted out by voters disgusted by six years of political dysfunction and brawling that has delivered three prime ministers.

The unbridgeable divide between conservatives and moderates has seen policy paralysis on energy, climate, sick offshore asylum seekers and discrimination against gay and transgender kids.

The most recent indication that voters are far from impressed was in the latest Newspoll. Taken at the end of a chaotic parliamentary fortnight which saw the government cut and run rather than lose a vote in the House of Representatives, it entrenched a 10-point losing margin between the government and Labor.

The poll is the first time any government has suffered three consecutive Newspolls where its two-party preferred vote was 45 per cent or worse, since Julia Gillard in 2013.

Malcolm Turnbull’s worst run was three consecutive polls at 47 per cent. His last four Newspolls were all 49 per cent.

Breaking We cross to Julie Bishop for a response to the latest #Newspoll result. pic.twitter.com/OURSeUO7Nz

Mr Morrison has not been able to bridge the ideological divide that bedevilled his dumped predecessor. Conservatives are furious with him for his captain’s call on a conscience vote on gay kids that has only inflamed the religious freedom debate, making them look like champions for discrimination.

The fear in the government’s ranks is the longer Mr Morrison hangs on, the worse their position could get.

The Prime Minister publicly is having none of it. He is guaranteeing Parliament will run its course even though he has truncated its sittings by way of insurance. Parliament has become something of a cage fight where the Liberals mostly come off second best, despite some telling blows.

Mr Morrison says the election is five or six months away, “more than enough time” for Australians to weigh up the alternatives. He is confident a surplus to be unveiled in the April budget for 2019-2020 will bolster the government’s claim to better economic management.

But dark clouds are gathering. The latest national accounts showed a slowing economy and reluctant consumers hit by five years of stagnant wages. Voters are used to treasurers forecasting surpluses only to see them fail to materialise.

Labor is ready for Mr Morrison to use next week’s budget update as his springboard – before there is any serious deterioration – and announce an early March election the day after Australia Day. Some of his own would not be surprised if this eventuates. It’s really about judging when is the best chance to save as many seats as possible.

On the other hand, Mr Morrison has been determinedly taking children off Nauru and laying the groundwork to demonise the 1000 mainly Iranian asylum seekers on Manus as dangerous criminals.

When Parliament is due to resume in February with no more children in the Nauruan gulag, one or two on the crossbench may no longer be willing to vote against the government on the issue. That would be a reprieve but not a circuit breaker and, anyhow, is by no means assured.

Analysis by psephologist Kevin Bonham says no matter when the election is held, in three months or six, the government is finished. He says “no government has recovered from this far behind with this little time to go”.