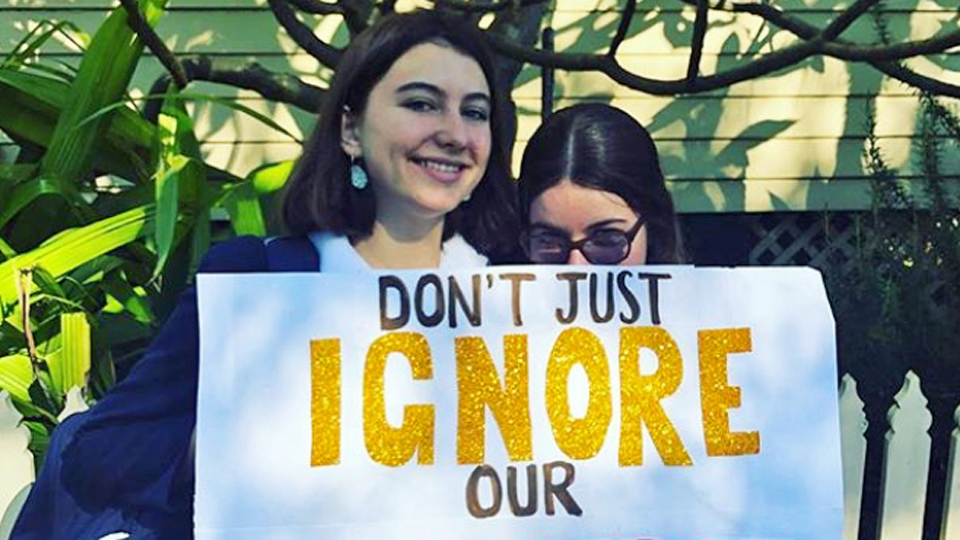 Call me clueless, but when trolls called my teenage kids “uneducated, selfish, virtue-signalling little turds” (the hyphen is mine) on Facebook this weekend, I was genuinely gobsmacked. These are children. Like most parents, I’m trying to raise my kids to be respectful, considered and to argue for their beliefs based on facts rather than insults.

SBS News had posted a story on the School Strike for Climate Action, including a photo I’d put on Instagram of my daughters holding the sign they’d made to take to the Big Walkout for Climate Action in Sydney on Friday, November 30. That photo (and others) got climate-science denying trolls piling on to hurl abuse at “brainwashed” kids they’ve never met.

My children joined thousands of other Australian schoolkids gathering in cities around the country to ask for urgent action on the real and present advance of climate change, waving placards and chanting slogans.

Sure, there were some less-than-classy signs and a couple of off-colour chants. I wouldn’t have wanted my kids to chant “Sco-Mo sucks!” and they tell me emphatically they did not.

But the fact these teenagers engaged in a peaceful democratic act made me tingly and teary with pride and hope.

It drove others to spew contempt and insults all over social media.

Tonnes of trolls copy-and-pasted the same slab of bile (“stolen from a friend … truth”) that I quote from above. It’s hardly new that so-called adults behave like foul-mouthed schoolyard louts on Facebook, but for them to cruelly mock and taunt kids seems like a new low.

Don’t worry, they came after me, too. One called me a failed parent. Another posted a reply to a teacher who declared that my daughter Rosie was one of her students: “you brainwash kids into thinking what you think instead of letting them think for them selves ay [sic]. You need to quit your job because you obviously don’t know near enough to teach children about climate change. Shame on you shame.”

I waded in. To one, I wrote: “The kids you are so blithely labelling as … ‘uneducated, selfish, virtue-signalling little turds’ are my daughters. They work hard at school, love their school, love their planet and their decision to go to the protest, and the effort that went into their poster, was all their own. I realise it’s easy to abuse other humans at a distance on social media, but I ask you to consider that these are real people and in this case my kids … I implore you all to genuinely read up on the climate science and if you still disagree, do it respectfully rather with such awful comments. Thank you.”

To another I asked, “Have you ever met me, or my children? Does posting abusive comments on social media make you feel good? I would never do that, nor allow my children to. You will notice that the poster is respectful, and taking in the facts of climate science, accurate. I wish you well.”

My older daughter kept her cool, defending her sister Rosie to a commenter who sniped of the photo “Hiding her face, LOL”. Grace replied: “I’m the girl on the left in that photo and my sister is on the right. She’s not hiding her face because she’s ashamed of what she stands for, but because our politicians need to see the beautiful and important sign she spent all evening creating. She’s not an uneducated little turd, but a smart, talented, aware and most importantly brave person who is taking a stand for the planet. Think before you comment next time.”

I’m genuinely puzzled: Why are those who don’t believe that global warming is real so terribly threatened by kids asking for action to combat it?

How is that hurting them?

Jane Nicholls is a former editor of WHO and editor-at-large of People in the US. She was chief executive of online startup The Global Mail and is now a freelance journalist and editor.