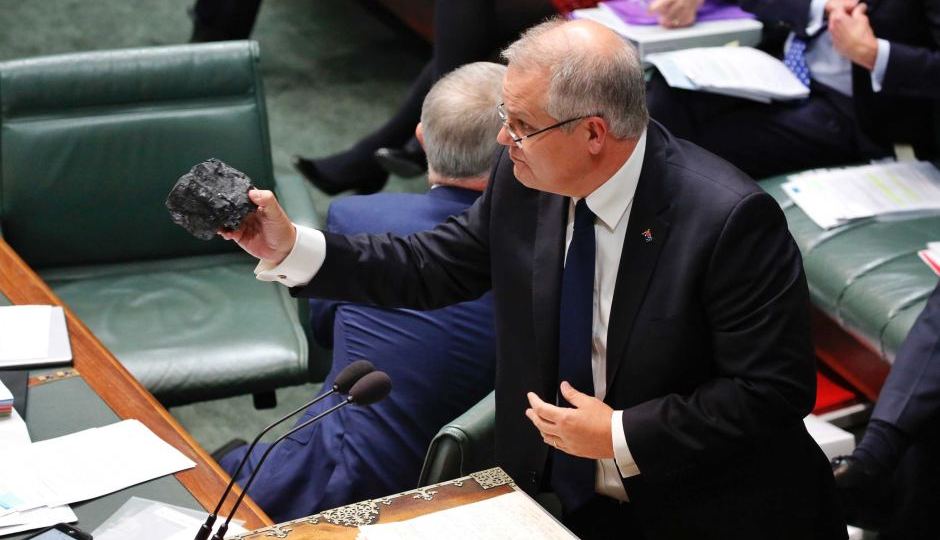 Treasurer Scott Morrison may be paying for his love of coal at the ballot box. Photo: ABC

Scott Morrison’s fight for political life will include an early budget designed to hand down his first surplus, but he’s been urged to “get real” by Victorian MPs on the warpath over the state election result.

The Prime Minister called a meeting of all Victorian MPs on Monday morning, as the Senate President Scott Ryan warned voters were sick of having conservative views “rammed down their throats”.

In a significant intervention, the senior Liberal said the party needed to learn the lesson of the historic Victorian defeat.

“They (voters) don’t want litmus tests for what it means to be a real Liberal,” he told ABC radio.

His warning was echoed by Victorian Liberal MP Tim Wilson, an economic conservative who championed the cause of gay marriage.

“I think you saw a heartland and voter base, who turned around, and said to us ‘we’ve had enough’,” he told Sky News.

“I sat there on polling booths, and every second person either gave you deadly silence, which is a very cold, deadly silence, or there were people mentioning energy, climate or the deposing of the prime minister.”

Mr Wilson then trained his attack on the debate over coal versus renewables, which in the past has included Mr Morrison brandishing a lump of coal on the floor of Parliament.

“If anyone thinks theres this deep sentiment out there that people hate renewables I say again: get real,” he told Sky News.

In the strongest sign to date that the Morrison Government intends to delay an election as long as possible, Treasurer Josh Frydenberg confirmed an early budget in April is now a live option.

The budget is traditionally handed down in May but cannot be delivered on that timetable because it coincides with the latest deadline to hold an election.

The strategy would allow the Morrison Government to hand down the first budget surplus of the entire Abbott-Turnbull-Morrison era before heading to the polls.

“The timing is a matter for the Prime Minister. (But) the budget can be held at a time that the government chooses,” Mr Frydenberg said.

Labor leader Bill Shorten said he welcomed a surplus but noted it was the product of higher taxes.

“If they have a surplus, we think this is a good thing, but this is because of increased taxation on companies,” he said.