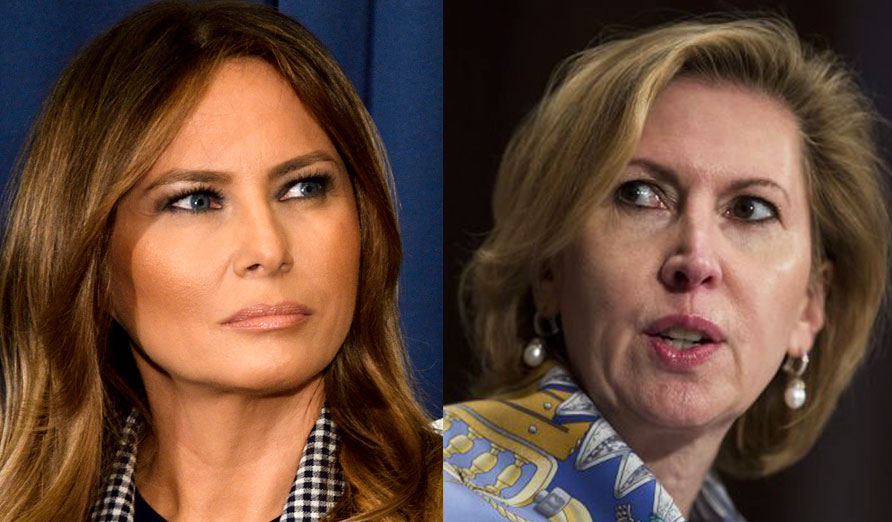 The first lady reportedly asked for Ms Ricardel to be fired.

US first lady Melania Trump is on the warpath. The reported reason? A stoush over seating arrangements on a plane.

“It is the position of the Office of the First Lady that she no longer deserves the honour of serving in this White House,” Mrs Trump’s communications director Stephanie Grisham said of Ms Ricardel in a strongly worded statement.

The rare intervention is the first time the East Wing has made such a blunt public statement calling for the sacking of a West Wing staffer.

Moments before Mrs Trump slammed Ms Ricardel, Mr Trump posted to Twitter a photo of the high-ranking aide with him at a candle lighting.

Today, we gathered for Diwali, a holiday observed by Buddhists, Sikhs, and Jains throughout the United States & around the world. Hundreds of millions of people have gathered with family & friends to light the Diya and to mark the beginning of a New Year. https://t.co/epHogpTY1A pic.twitter.com/9LUwnhngWJ

The drama unfolded after the first lady complained to the president that she was unhappy with how she was being treated by Ms Ricardel, a former Boeing executive who worked on the Trump presidential campaign, sources told Reuters.

Until now, her credentials have been strong: she was handpicked by veteran conservative policy expert Mr Bolton to be his second in charge earlier this year.

But now Mrs Trump has explicitly asked her husband to axe Ms Ricardel.

The sources said the dispute between the two powerful women intensified over Mrs Trump’s first solo trip which she made to Africa in October.

Their dealings over the trip “didn’t go well”, said one of the sources.

Ms Ricardel reportedly clashed with members of the first lady’s staff over seating arrangements on a plane during Melania’s trip, according to The Guardian.

Other reports including in The Hill said Mrs Trump’s issues with Ms Ricardel also stemmed from the belief she may have been leaking stories to the media to make Melania look bad.

During her trip, Mrs Trump told ABC in an interview she does not trust some people in the White House.

She said she gives the president “my honest advice and honest opinions and then he does what he wants to do”.

Mrs Trump felt that Ms Ricardel tried to short-change the first lady in terms of US government resources allocated to support her Africa tour, the other Reuters source said.

The clash over resources was not elaborated on.

A source familiar with Ms Ricardel’s White House performance told Reuters she also ran afoul of many NSC staff and “sort of alienated everyone” except for her immediate superior Mr Bolton.

The tensions began building to a crisis point about a month ago and serious efforts were made to defuse the dispute, said one of the sources familiar with the White House intrigue.

The efforts were apparently unsuccessful.

Ms Ricardel was also believed to have had a dislike of defence secretary Jim Mattis, current and former officials have told Reuters.

There was confusion among White House media over whether Ms Ricardel had left the building. On Tuesday afternoon (US time) The Wall Street Journal said she had not only been fired but escorted from the premises.

Corrections & Amplifications
White House Deputy National Security Adviser Mira Ricardel is expected to be fired. An earlier headline incorrectly said she already had been fired and escorted from the White House.