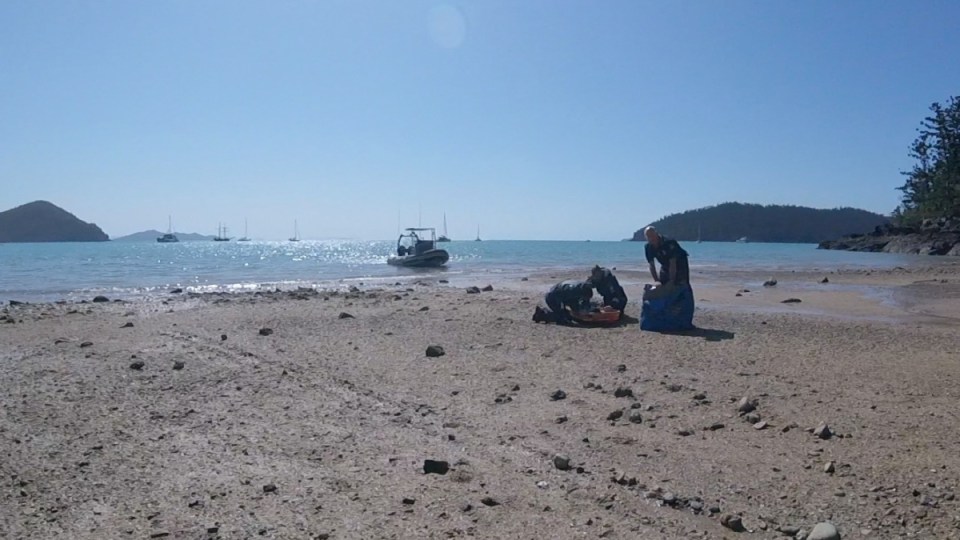 A rescue team is pictured attending a Melbourne girl, 12, who was bitten to the leg in September. Photo: AAP

A man attacked by a shark near Cid Harbour in the Whitsunday Islands on Monday night is being airlifted to Mackay hospital.

Paramedics from Queensland Ambulance tweeted that the man, believed to be aged in his 30s, was being airlifted after suffering “significant” leg and wrist injuries in the attack that occurred at 5.37pm local time (6.37pm AEDT).

They tweeted an hour later that a paramedic had reached the scene and was assessing the patient in the dark.

It was the same area in which a 46-year-old woman and a 12-year-old girl were bitten by sharks in separate attacks a day apart in September.

A male patient is currently being airlifted to Mackay Hospital with significant leg and wrist injuries following a shark attack in waters near #CidHarbour which occurred at 5.37pm. pic.twitter.com/1eKy4XYPfo

The attack comes less than two months since Tasmanian woman Justine Barwick was mauled on the leg on September 19 by a shark.

Authorities believe the nearby presence of an emergency doctor helped save her life.

Dr John Hadok from the Mackay Base Hospital was on a nearby boat.

He said Ms Barwick’s injuries were life-threatening, and she was in an extreme state of hypervolemic shock by the time he arrived – a result of losing more than one-fifth of the body’s blood supply.

A 12-year-old Melbourne girl was bitten on her leg less than a day later and transported to the Mackay Base Hospital.

Baited aquatic traps were sunk in the waters off the Whitsundays to capture the shark or sharks responsible for the two maulings.

Four tiger sharks were baited and killed, after another was “humanely euthanised” on Sunday afternoon.

But a backlash from environmental groups followed the culling.

The genius government officials in Australia are again culling/killing sharks & their savant counterparts in Cape Cod are pushing to cull/kill seals. When will basic intelligence & respect for the planet be a requirement for highly paid supposedly educated government officials? pic.twitter.com/lMR1auSxIg

Man on his way to hospital after Cid Harbour shark attack