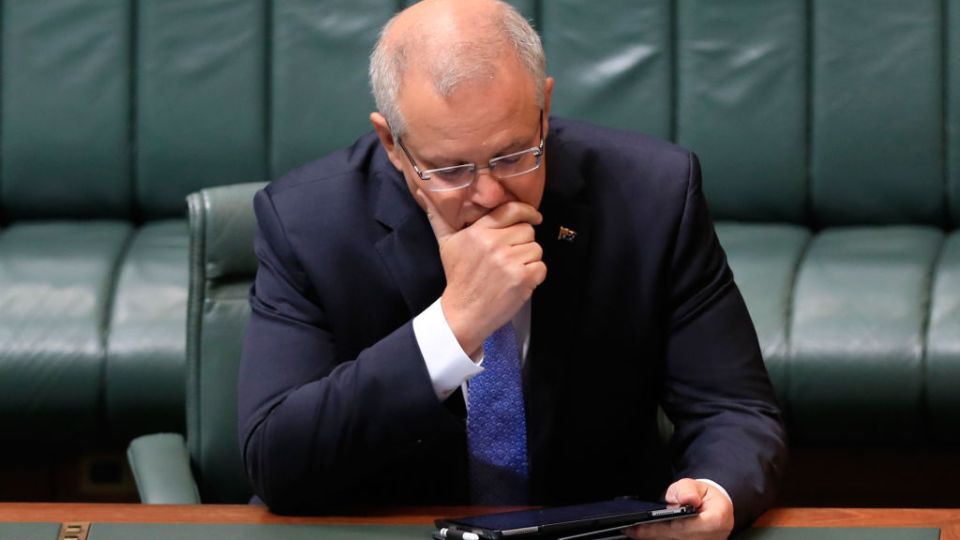 Scott Morrison said Australia should only accept as much people as "our infrastructure can support". Photo: Getty

If you really want to know what’s going on as far as a political party is concerned, have a look at what it does with its leaders in an election campaign. The Liberals in Victoria clearly don’t see Scott Morrison as a vote magnet.

The Prime Minister was a conspicuous absentee at the weekend campaign launch by would-be premier Matthew Guy. He spent a quiet day off with the family at Kirribilli House in Sydney.

On the other hand, at Labor’s launch, Bill Shorten was cheered as Australia’s “next Prime Minister” and was the warm up act to Daniel Andrews’ re-election pitch.

Liberal Party sources make no secret of the fact Mr Morrison has huge negatives in Victoria. Negatives that according to the latest Newspoll, are not confined to that state.

It has only taken six weeks for the PM to slip into negative territory for approval of his performance. More people are critical of him (44 per cent) than approve (41 per cent).

Polling analyst Andrew Catsaras says once a leader slips into this position, it can only get worse.

“People have looked at him and decided he’s a dud.” He says.

Ironically, the day after the state campaign launches, Mr Morrison was on Victoria’s Shipwreck Coast. There to trumpet infrastructure spending as part of a bigger package for the region.

The local reporters asked him if he would be campaigning with Mr Guy. He chummily responded he was sure he and “Matty’s” paths would cross. But “No” he wasn’t going to Ballarat where the state leader was campaigning, he was heading to “the Big Cheeze” at Warrnambool.

His deposed predecessor, Malcolm Turnbull, was back on Twitter liking a report on Mr Morrison’s drop in popularity. The former prime minister is clearly still angry over being dumped when he had the government competitive in Newspoll, trailing by just 2 points – not the devastating eight points in the latest survey.

The poll suggests the determined rejection of the Liberals in Wentworth is no isolated fluke. The honeymoon such as it was, is over.

Mr Morrison is paying a big price, not only for the coup, but for his seat- of-the-pants style of government.

Look no further than to the other big news on Monday: Mr Turnbull was in Indonesia to help repair damage done to the relationship done by Mr Morrison’s panicked announcement made in the last week of the Wentworth campaign about moving our embassy in Israel to Jerusalem.

Unless that is done as part of a genuine peace settlement with the Palestinians, it is a highly contentious move in Muslim-majority Indonesia, not to mention in the Middle East where we do a lot of agribusiness.

Evidence in Senate Estimates last week confirmed it was a captain’s pick done without real consultation with senior diplomats or top military brass.

One senior Labor strategist says the look was so bad for the prime minister.

“Turnbull was in Bali doing Morrison’s job, while the prime minister was being frozen out in Victoria.” He said. “It is like when Julia Gillard was on the slide.”

Another dumped prime minister Tony Abbott has written what amounted to a job application in The Australian. He reminded readers “Howard … as better at managing his colleagues in his second stint as leader than his first”.

Mr Abbott also dismissed the key issues in Wentworth, like “ABC funding, climate change and getting children off Nauru”, as saying more about Kerryn Phelps than “about her new seat”.

ON 2GB radio, Mr Abbott doubled down, refuting the 80 per cent finding of the Galaxy poll that supported the refugees going to New Zealand. He said “Nauru is no hell hole, if you like living in the tropics it is very. very pleasant”.