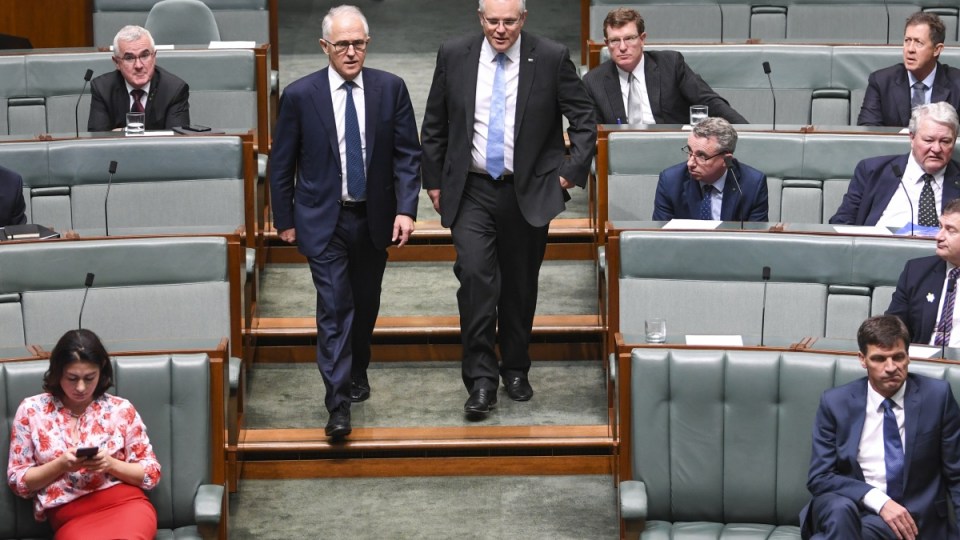 Australia’s former Prime Ministers have claimed nearly half a million dollars in just six months to fly around the country and run their offices, analysis shows.

Not counting their pensions, former leaders charged taxpayers at least $481,381 worth of expenses between January and June this year.

This figure is likely to increase with the addition of Malcolm Turnbull to the ranks of ousted PMs.

That move is also costing the Liberal party votes, with the latest Newspoll showing PM Scott Morrison’s approval rating is in negative territory for the first time.

The survey of 1646 voters suggests the 41 per cent of Australians satisfied with the Prime Minister are outnumbered by the 44 per cent who are dissatisfied.

The Coalition has dropped one point back on two-party preferred basis, trailing Labor 46-54.

It was revealed last week that Mr Morrison had granted Mr Turnbull unlimited overseas travel – although each trip must be approved by the prime minister of the day.

“This amendment determination results from consultations between the Prime Minister and Mr Turnbull about Mr Turnbull’s capacity to travel overseas on government business,” a Senate hearing heard last Monday.

His wife Lucy will be able to join him on some flights. The shiny new entitlements will be used when Mr Turnbull flies to Bali this week to represent the government at the Our Ocean conference.

In addition to travel, Mr Turnbull also gets up to three ongoing staff, and one temporary senior adviser for the next 12 months.

He can charge taxpayers for a fully equipped office, unlimited postage, a smart phone, newspaper subscriptions, a home phone line, private vehicle, and chauffeured ‘Com Car’ trips for travel outside of Sydney.

His employees can travel within Australia at a total cost of up to $15,000 a year.

And he is not alone. Tony Abbott, Julia Gillard, Kevin Rudd, John Howard, Paul Keating and Bob Hawke continue to make use of similar benefits, according to the Independent Parliamentary Expenses Authority (IPEA).

Mr Abbott claimed $5279 for overnight stays as former prime minister, which a spokesperson confirmed he listed as ‘official duties’, in the first six months of the year.

There were $8251 in domestic flights that corresponded with those overnight stays, and $342 in Com Car charges.

Mr Abbott also spent $2535 travelling to Devonport, Tasmania, in June to help the unsuccessful Liberal campaign in the Braddon by-election.

He is still in Parliament as the local member for Warringah, meaning the majority of his expenses are claimed as a parliamentarian not as former Prime Minister.

The New Daily was able to confirm at least $13,872 was spent for the first six months of the year solely on his capacity as former prime minister.

In 2016, Mr Abbott chewed through $24,311 for 65 nights away for trips as former Prime Minister. The Herald Sun reported that sum included campaigning during the 2016 election.

Fairfax put his annual pension after retirement at $307,542. The figure is based in large part on his various roles in parliament.

The Finance Department refused to reveal the exact sum of prime ministerial pensions to The New Daily because of “privacy considerations”. The calculations depend on whether a member was elected before or after 2004, because of changes introduced under Mr Howard.

Mr Rudd spent $8141 on domestic flights between January and June this year, according to expenditure reports to the IPEA.

His family also charged $4698 for travel in the first six months of the year.

His staff travelled around the country using $4702 worth of tax dollars between January and June.

It means Mr Rudd used a total $86,625 in the first six months of the year, not including staff salary or his pension.

His spokesperson confirmed no entitlements were used to fund the book tour he is on promoting The PM Years, which has been privately funded.

Taxpayers were also slugged $44,260 on office facilities, another $307 on office admin and consumables, and $1370 on telecommunications.

Ms Gillard charged $149 for staff travel, $24 for publications, and $115 for printing and other communications.

Her expenses totalled $63,285 between January and June.

His family spent $1239 in domestic travel. He claimed another $1184 for staff travel.

Mr Howard’s office cost $126,956 for the first six months of the year, along with $1581 in office admin and consumables.

He spent $4026 on publications and newspaper subscriptions, and a total $2120 on communications.

Mr Keating charged $771.29 for domestic airfares and $3733 on Com Car trips in the first six months of the year.

He spent $1985 on telecommunications, as well as $824 on employee travel costs.

Mr Hawke claimed $7711.48 on domestic airfares between January and June this year.

Another $1272 went on Com Car trips, while his private vehicle cost $7037 over the six months.

He spent $1884 on newspaper subscriptions and $1684 on telecommunications.

A staffer flew within Australia at a cost of $4096.

It means Mr Hawke’s total claimed expenses for the first six months of the year was $91,542.

It was under Mr Turnbull’s leadership that the controversial Life Gold Pass was drastically scaled back, closing it to any new parliamentarian who does not become Prime Minister.

Under the current rules, former PMs can take up to 30 domestic return trips a year.

Mr Turnbull has previously said he would not use the benefit.

MPs who left Parliament before the tightened the rules are entitled to 10 return flights a year if they were a senior office holder, or five return trips if they were a backbencher.

The trips are supposed to be for the public benefit and not for commercial or private interests.

The true cost of our former Prime Ministers