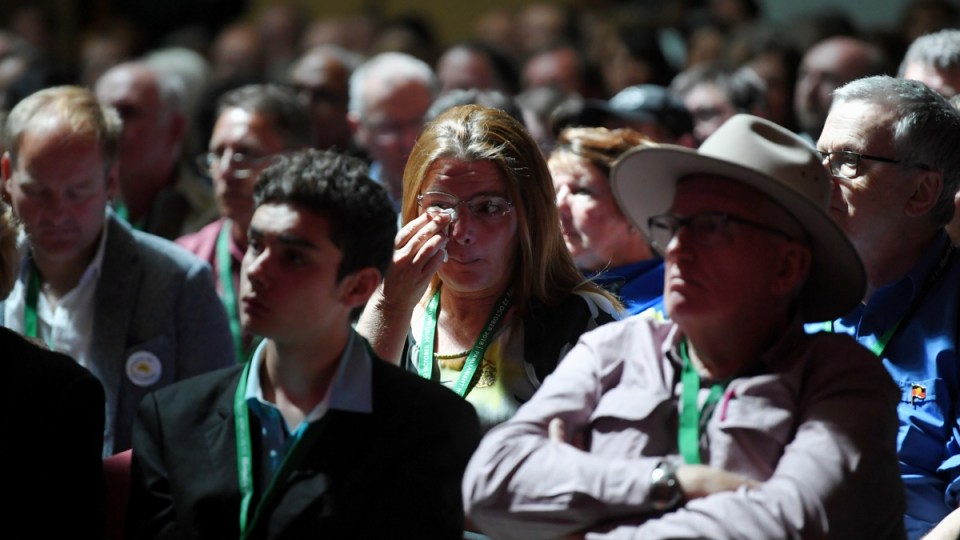 There were tears in the Great Hall as the apology to sexual assault victims was read. Photo: AAP

Emotion and anger dominated the much awaited national apology to victims of child abuse in institutions today by Prime Minister Scott Morrison.

Mr Morrison himself set the emotional tone as he fought back tears giving the address to a packed parliament, his composure breaking when telling the tragic family story of advocate Chrissie Foster.

The speech, broadcast live across the country and at special screenings for survivors, had a strong main message – that the abuse was not the fault of the victims and that action needs to happen to ensure the future safety of Australian children.

Mr Morrison said many victims abused in in institutions from schools to church-run orphanages and scout groups had been “crushed, disregarded and forgotten” by their perpetrators.

“As a nation we failed them, we forsook them and that will always be our shame.

This apology is for them and their families too … it happened anywhere a perpetrator thought they could get away with it and the systems allowed it to happen and turn a blind eye.

“It happened week after week, decade after decade … unrelenting torment.”

Mr Morrison urged all institutions to adhere to the recommendations of the $500 million royal commission probe into child abuse.

He vowed that the government is already taking action on 104 of the 122 final recommendations.

He also announced that the newly created National Office of Child Safety would report directly to him and that there would also be a new museum honouring those who had been abused as children.

He said: “We honour every survivor in this country, we love you, we hear you and we honour you.”

Mr Morrison was briefly overcome with emotion as he talked about the daughters of Chrissie and Anthony Foster who were repeatedly abused by a local Catholic priest, Kevin O’Donnell, in Oakleigh, Melbourne.

Devastated by her experience, Katie Foster started binge drinking and was hit by a car in 1999, leaving her with mental and physical disabilities.

Her sister Emma also struggled as an adult and died of a drug overdose aged 25.

“As a father of two daughters I can’t comprehend what she has faced,” the prime minister said of Chrissie Foster.

Later, taking to the stage in the Great Hall in front of 400 advocates and survivors, Mr Morrison was heckled by several of those attending the event.

Victims are angry the recommended $200,000 compensation has been capped at $150,000 and was proving to be a difficult process to navigate.

In a speech in the Great Hall, Mr Shorten sent a message to survivors saying: “To all of you who have suffered it was never your fault, it was not your fault … and I terribly apologise for the fact you were not believed, I’m so so sorry.”

Mr Shorten said it was the “moral duty” of all institutions to implement the recommendations of the Royal Commission.

James Fitzpatrick, 51, who was abused as a school boy by two Catholic priests and a teacher in Thornbury, Melbourne, told The New Daily he was pleased to get a ticket to go to parliament to hear the apology in person.

“I was abused by three different perpetrators so it was a heartening moment for me to hear the apology in Canberra myself.

Mr Fitzpatrick said that he was disappointed by hecklers disrupting the mood of the event but understood their anger.

“They mostly seemed angry the government are now giving extra funding to the Catholic schools while this is all still being sorted out.”

‘We hear you’: Morrison apologises to sexual abuse victims