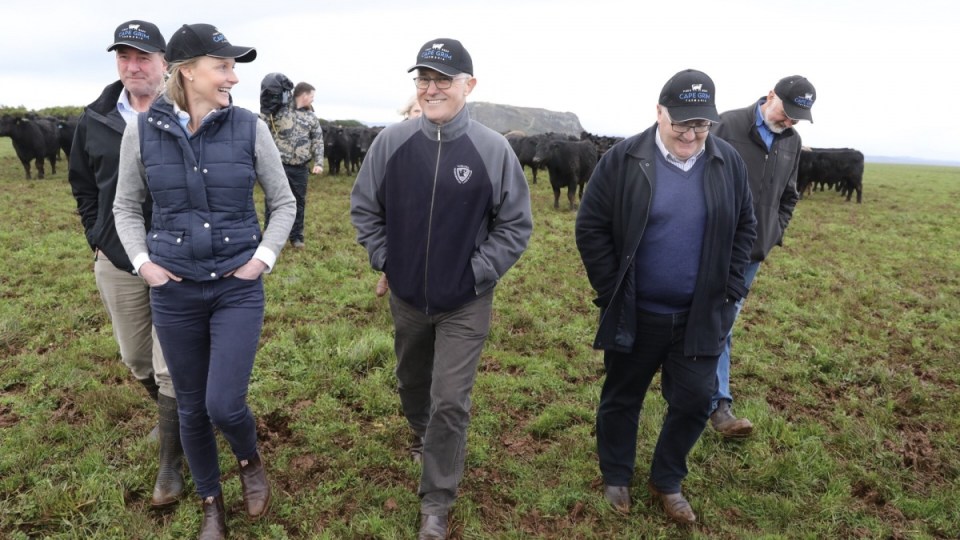 Woah, head spin. I stepped out of the room for a minute and Carry On Up the Khyber star Sid James was dug up and made chief sub-editor for Tasmanian newspapers.

Unreal! Who doesn’t love a saucy joke about a likely female sort with their daily news? It’s so cool and fun. So contemporary. So appealing to all audiences.

No doubt even Sarah Courtney, Tasmania’s primary industries minister who stepped down over an affair with the head of the department she controls, is amused and doesn’t feel demeaned by the headlines she’s generated.

Just in case, I did get in touch to ask. But the Liberal Member for Bass was so busy laughing she didn’t respond.

For those who aren’t across the hilarity yet, Ms Courtney’s romance with Dr John Whittington didn’t merit being branded as serious news, such as a potential breach of ministerial conduct.

Nothing like that. Come on sweetheart, we’re talking here about a pretty little blonde thing who looks great in jeans! Where’s your sense of humour?

The newspaper teamed it with a photo of Ms Courtney brushing her hair out of her face, almost as if she was post-coital and about to ask for a cigarette.

The Advocate tried for a similar play on words but was more Presbyterian: ‘No minister.’

The creepiest was Launceston’s The Examiner, who went large with Ms Courtney and Dr Whittington’s ‘Couply Conduct.’ (Exhumed Sid, if you know what that means, maybe between leering at a busty nurse on set or making a double entendre you can send a telegram and let us all know).

How Tasmania's three daily papers covered Primary Industries Minister Sarah Courtney's revelation she is in a relationship with her department secretary #politas pic.twitter.com/KIPjrwxjKE

Anyway, enough of the gags.

The truth about the single Ms Courtney’s conduct with her boyfriend – who is also taking leave from his reported $400,000 a year job – will perhaps come out via a mooted conduct investigation, but that isn’t the moral of the story today.

What is: The sly, outrageously sexist treatment of a female government minister that probably wouldn’t have happened had she been a man.

The fact that the sex lives of prominent women is the stuff of tits and ass hootings – are you reading this, Cheryl Kernot? – about someone’s professional and personal life.

The only thing missing from the front page denunciations was a strap with instructions to turn to page three, where readers would have found a topless Samantha Fox.

That’s a time-honoured double standard in the style of UK tabloids, where women are vilified on the front page then objectified on the next, with the result that both treatments denigrate them.

Think back to earlier this year, when it was revealed the then-deputy prime minister Barnaby Joyce got a junior staffer pregnant, and left his wife and children to live with his mistress.

The most salacious coverage was a couple of daggy headlines playing on Barnaby’s name, but the most head-turning part was, of course, a photo of not Mr Joyce but Ms Campion.

In a T-shirt and shorts, looking tired. Heavily pregnant as a result of having a sex life. I’m yelling that bit.

Their message: The Joyce/Campion affair and pregnancy were open secrets in Canberra, but they didn’t report on them out of respect to those involved.

Give us a spell. Imagine an alternative world where Julia Gillard fell pregnant to a staffer while she was prime minister. Imagine how fast that story would have broken, and not with dignified headlines.

While what we’re all wondering is how good Ms Courtney looks in a bikini, for those not familiar with her CV, she did OK before becoming a human punchline.

Over the past decade, she’s worked as a quantitative analyst, a stockbroker (for JBWere) and has a Masters of Wine Technology and Viticulture, which she puts to use on her vineyard in northern Tasmania.

The question is: What’s the end game here?

The Courtney headlines seem another step along the inexorable, lamentable trend in Australian newspapers to ape their depressingly unoriginal UK counterparts run by a small posse of powerful oversexed men.

That style, geared to the lowest common denominator to appeal to neanderthals, is boring.

It’s not informative. It’s not funny. And it leaves women again just in the kitchen or the bedroom.

Australia’s sexist media needs to man up for women