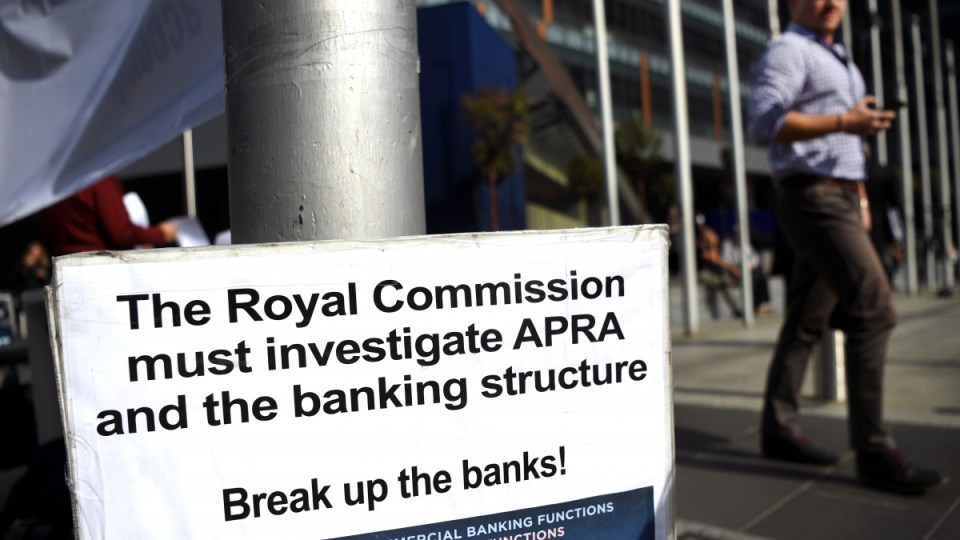 The message is clear about fixing the issues. Photo: AFP/Getty

The point of having a royal commission into the finance industry is to find out what is systematically wrong with it and get those failures fixed, to try to prevent more damage to customers.

Kenneth Hayne’s job is not to uncover every misdeed by a bank, superannuation fund, financial adviser, mortgage broker or insurer, let alone listen to everyone who has a grievance about them. Healthy chap though he seems to be, Mr Hayne and his staff would be unlikely to live long enough to accomplish that.

Which is why Labor’s push to extend the royal commission appears more about politics than solving problems.

The litany of failures aired by counsel assisting has made the Liberal Party’s long opposition to holding the commission look particularly bad.

The longer that embarrassment can be extended, up to and including an election, the better it is for Labor, the more opportunities it provides to remind voters Scott Morrison and Josh Frydenberg voted against such an inquiry 26 times.

What Labor hasn’t demonstrated is how extending the government’s embarrassment by hearing from more victims would help prevent more victims being created.

It’s already obvious that the longer the inquiry, the slower will be subsequent reforms. Maybe Labor doesn’t care as much about that as it does the politics.

Admittedly, this commission is on a very tight schedule. That’s no accident as the government, after not wanting the thing at all, at least wanted to limit its impact. Again, politics was put first.

And the terms of reference could have been a little broader if there was more time. Consequently, there are gaps in what has been covered. For example, while the Big Four banks and AMP all copped a grilling, many observers were surprised Australia’s fifth big bank, Macquarie, was never called in for a chat.

But that’s a bit like the story of the speeding motorist pulled over by a traffic cop and complaining that he was just following the rest of the traffic and they weren’t being booked.

“Ever been fishing?” asked the cop.

“Ever catch all the fish?”

It’s not Mr Hayne’s job to catch all the rotten fish.

The royal commission’s home page makes this clear statement: “The Commission is required to conduct an inquiry. It cannot resolve individual disputes. It cannot fix or award compensation or make orders requiring a party to a dispute to take or not take any action.”

Unlike the child abuse royal commission, there is not a requirement or time for the healing element of airing and confronting wrong. Comforting victims is not this commission’s job – that’s the task of the regulators, prosecutors and courts if they’re functioning properly. It’s the commission’s job to prod and embarrass them into functioning.

The commission’s staff have waded through more than 10,000 submissions, made their own inquiries and been fed cases by ASIC to come up with representative examples of the financial system’s most obvious failures and problems. The commission has been more thorough in some areas than others, but they only have to be representative samples to lead to the recommended policy changes and actions yet to come in February’s final report.

Besides, we’ve heard some of the misdeeds before in the Senate inquiry that gave rise to Labor pushing for a royal commission. The Senate demonstrated that hearing the misdeeds doesn’t stop them.

Mr Hayne could yet ask for more time. The government has indicated that it would be granted if so requested.

Hopefully, he won’t as it would be more helpful to get his recommendations up in public before the federal election so that politicians can be held to implementing them.