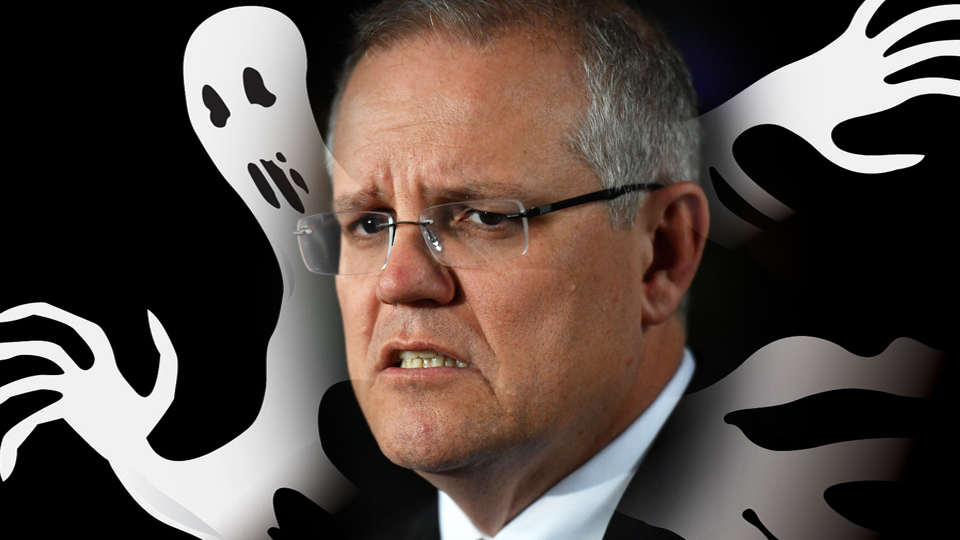 His opposition to the bank royal commission may haunt him the most. Photo: Getty

If Scott Morrison had his way, the political past of himself and his government would no longer exist. He puts it this way: “I will leave all ghosts in the past. That’s where they deserve to be.”

The problem is, like Banquo’s ghost, Mr Morrison’s ghosts keep appearing to spoil his feast. The latest manifestation was from his immediate predecessor Malcolm Turnbull.

Mr Turnbull in New York answered a question that Mr Morrison either can’t or won’t. Why is Malcolm Turnbull no longer the prime minister?

The aggrieved former PM has a ready answer. He said the “coup” that dumped him was “crazy”.

“But for reasons that they’re not been able to explain, you know, there was an element of the party and of the media that wanted to blow the government up and they did,” Mr Turnbull said in remarks at a function in the Big Apple obtained by Nine News.

The former PM repeated his claim that internal Liberal polling in 40 marginal seats had him on track to win the election or, at the least, very competitive.

He even agreed the government would have won the next election under the old regime.

The Turnbull intervention does nothing to enhance Mr Morrison’s credibility.

The new man at the helm is left to limply blame the “party room” for exercising its right to hire and fire leaders – a process he expects us to believe he played no active part in and has no underlying causes.

Mr Turnbull highlighted the fact that one of the most destructive agents in his demise was still in the Parliament – the “very conservative” Tony Abbott.

“There’s no way I would be hanging around like embittered Kevin Rudd or Tony Abbott,” Mr Turnbull said. “Seriously, these people are like, sort of miserable, miserable ghosts.”

Kevin Rudd shot back on Twitter with a “reality check” for “miserable ghosts”.

“Having told the world you’ve left politics behind, you seem to be in the media every day talking about it,” he wrote.

There can be no running away from the instability and internecine warfare that has dogged the government’s political management for five years.

Mr Morrison, as he keeps reminding us, has been a senior player in all that time. While he can’t be blamed for everything, there is no escaping the integral role he played in one of the government’s biggest failures: obstinately resisting a royal commission into the banks.

Labor keeps reminding us he voted 26 times against it.

Right up until the moment when he and Mr Turnbull caved to the pressure of Labor and the Nationals, the then treasurer insisted the calls for such an inquiry were “just a populist whinge.”

Worse, he claimed there was no need because he had acted and had brought the banks to heel.

His explanation for this capitulation was that he had underestimated the pain and hurt people who had lost everything financially were feeling.

His assurances now that there is no need for the royal commission to extend its time so it can test the new laws and regulations needed to reform our discredited financial system ring just as hollow.

Morrison told the nation again and again that in the Australian Securities and Investments Commission and the Australian Prudential Regulation Authority he already had “tough cops on the beat.”

Commissioner Kenneth Hayne in his interim report has shown that to be at best delusional or at worst disingenuous.

But the commissioner’s failure to produce interim recommendations has more than the government’s political opponents concerned.

Senior lawyers in the financial sector say that Commissioner Hayne’s admonitions about greed and a failure to meet community standards need to be translated into new clear laws.

This is one ghost that will keep haunting the Prime Minister.