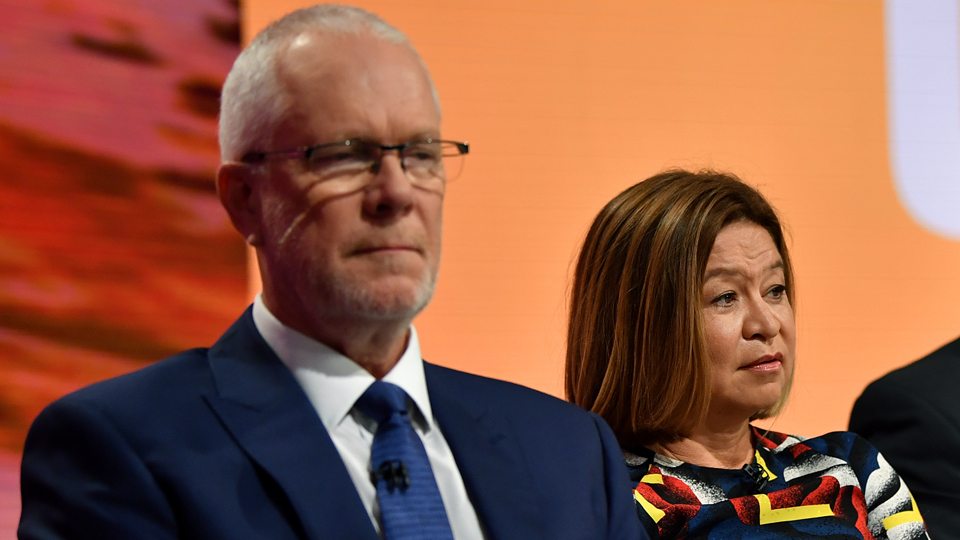 The Scott Morrison government and the ABC board are moving to pressure ABC chairman Justin Milne to resign as soon as possible.

Mr Milne has refused to budge after a leaked email has been widely viewed as direct evidence of a breach of his director duties under the ABC Act, as former prime minister Malcolm Turnbull has denied any interference.

But overnight there was another leak to The Daily Telegraph – an ABC board document in which sacked managing director Michelle Guthrie alleges Mr Milne ordered her to fire political editor Andrew Probyn.

“You have to shoot him”, The Telegraph reported the document as saying, because Mr Turnbull “hated” Mr Probyn. The exchange was said to have occurred in a telephone conversation on June 15.

“He told me I was putting the future of the ABC at risk as we are asking the government for half a billion dollars for Jetstream and we won’t get it unless I do what I’m told,” The Telegraph reported the leaked Guthrie document said.

It was only the latest in a string of explosive leaks. Mr Milne has not denied he wrote the May 8 email to his now-sacked managing director, in which he advised Michelle Guthrie to “get rid” of economics correspondent Emma Alberici because “they [the Coalition government] hate her”.

Despite these leaks, he appeared on Wednesday to receive majority ABC board support to hold his position.

Speaking in New York where he was due to speak at a United Nations general assembly event, Mr Turnbull rejected suggestions he had asked for specific ABC reporters to fired.

“That is not right. The bottom line is I have never called for anybody to be fired,” he said, according to News Corp Australia.

“My concern has been on the accuracy and impartiality of news reporting.

“I want to be very clear, I have not complained and do not complain about left/right bias,

“Accuracy is critically important and I have to say … it [the ABC] has failed in that regard in a number of examples in recent times”.

Mr Turnbull also defended his complaints to Mr Milne and insisted any questions of whether Mr Milne should resign was “a matter for him”.

But forces within the Morrison government and the ABC board are believed to be moving to force Mr Milne to “take a revolver into the library” – to resign the chairmanship as soon as possible to staunch what could be a protracted and very damaging national row over the independence of the ABC.

With the October 20 Wentworth by-election looming, the government is anxious to win it and expediently wants to clear the ABC issue from voters’ minds.

The appointment of a new chairman to fill a Milne vacancy would have the added benefit of a new government-appointed ABC leader to steer the selection of the next ABC managing director.

In contrast to his blunt advice to Ms Guthrie to sack Ms Alberici, the Sydney staff meeting offered Mr Milne some procedural fairness and time to explain himself with the proviso that he step down pending an inquiry.

Mr Fifield, with the approval of Prime Minister Scott Morrison, intervened late on Wednesday to set up the exit ramp.

It came in the form of a departmental inquiry to “establish the facts” surrounding the Alberici email. The inquiry will be conducted by the secretary of the Department of Communications and the Arts, Mike Mrdak.

This inquiry was immediately rejected by shadow communications minister Michelle Rowland, who told The New Daily that while she had respect for Mr Mrdak, his inquiry would not be open and transparent.

Labor, the Greens and most crossbench senators are expected to support an urgent Senate select committee of inquiry into the Justin Milne affair.

The ABC board is bracing for the next leak from supporters of ousted MD Michelle Guthrie, who has engaged the services of spin doctors and lawyers to defend her reputation.

Last Monday the board terminated Ms Guthrie’s five-year employment contract after she refused to resign by mutual agreement. She has said the board’s action was unjustified.

In addition to the Alberici “get rid of her” email, there have been reports of other questionable or alleged politically motivated interventions by Mr Milne inside the ABC.

These interventions and any others that are exposed through further leaks will become grist for a parliamentary inquiry likely to embroil the ABC and the federal parliament in damaging controversy for months.

Just who would replace Justin Milne if and when he leaves the ABC chairmanship? It is believed the minister will likely look to current down table ABC directors for expedient promotion. These include former TV network executive Peter Lewis, and the most recent arrival at the ABC Board, Joseph Gersh, a Melbourne investment banker and director of The Sydney Institute. Mr Gersh was appointed at the discretion of Senator Fifield.

While long-standing ABC executive David Anderson is now acting managing director and is currently favoured to take the statutory role, the ABC board’s appointment of head hunters to find new leadership of the public broadcaster will put Mr Anderson into competitive assessment of his skills and abilities.

The appointment of the next ABC MD will become any new chairman’s most pressing duty.

Quentin Dempster is a Walkley Award-winning journalist, author and broadcaster. He is a veteran of the ABC newsroom. He was awarded an Order of Australia in 1992 for services to journalism.

ABC board chair Justin Milne being urged to resign