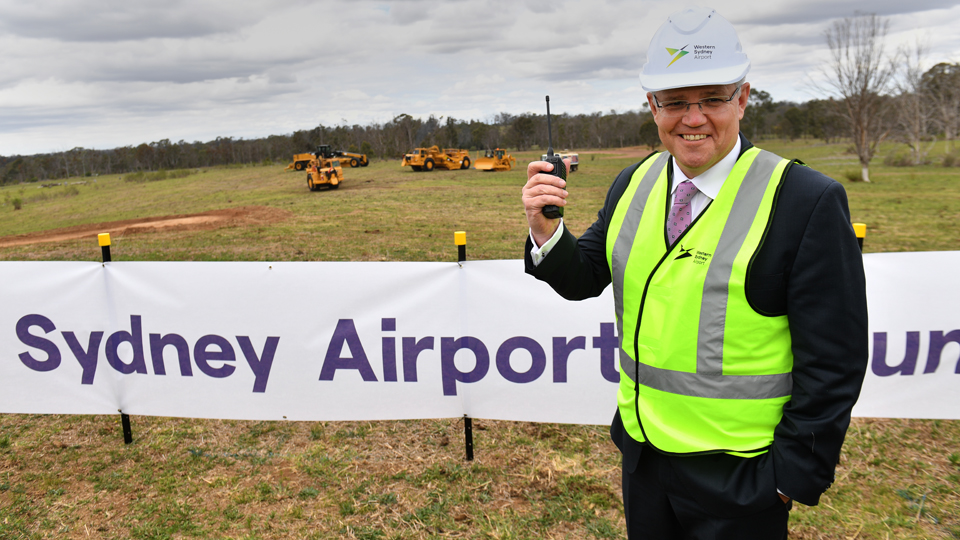 The new PM oversees the start of construction at Badgerys Creek Airport on Monday, one of his many 'announceables'. Photo: AAP

Politicians live or die by the perceptions they create. Scott Morrison has hardly drawn breath in the month he’s been at the helm. And if winning the game was just about being action man, he’s on the right track.

But it’s more than that.

When the hand waving stops and after the bull horn announcements have aroused some interest, the question becomes what is this daggy dad, footy-loving, everyone’s mate actually delivering.

On Monday, Mr Morrison used the fact that he was able to get tougher penalties for strawberry saboteurs through the Parliament in 36 hours as an example of his ‘can do’ attitude.

Whether raising the maximum sentence for this criminal vandalism from 10 years to 15 years is an answer or merely an attempt to be ‘seen doing something’ is more to the point.

Focus groups are telling Labor that the uncommitted, unplugged in voters have actually marked up the Prime Minister for his intervention and they liked the fact he sounded just like them in calling the perpetrators “grubs”.

But the same punters marked down the government he leads for its shambolic disunity and self-centred rivalries.

This gives some insight into the latest Newspoll – the gold standard as far as politicians, especially Liberal ones – take as a guide on how they are travelling.

In the latest one Mr Morrison closed the gap after preferences from trailing Labor by 12 points to eight points. That would see 20 government seats fall on the electoral pendulum.

When Malcolm Turnbull hit the same mark after the Super Saturday by-elections losses, the headlines screamed “Turnbull sinks”. At the same time, he led the preferred PM measure by the same margin, the 13 points that Mr Morrison just recorded.

It is instructive to compare Mr Morrison’s approval now that he is Liberal leader and prime minister with his standing with the electorate just two weeks before the “coup” against Mr Turnbull.

In The Essential Poll only 2 per cent preferred him to lead the party – well behind Mr Turnbull and Julie Bishop and even Peter Dutton, who was on 4 per cent.

The highest Mr Morrison ever reached in the Essential “Best Leader of the Liberal Party” polls over the past four years was 3 per cent.

So the approval now is shallow and may not survive any tidal wave of anger from the five million parents of children in state schools who did not receive the billions extra pumped into Catholic and independent schools last week.

The respected Grattan Institute estimates Mr Morrison’s generosity to the private schools was 10 times more generous than it needed to be to rectify the “Gonski” funding shortfall identified by the sector. State governments, Liberal and Labor, are now demanding the same redress.

Mind you, Mr Morrison has $23 billion up his sleeves from the abandoned corporate tax cuts and, on the experience of the past four weeks, he won’t be too scared to use it to buy favour with voters.

In the meantime, government debt continues to mount despite the fact the budget review at the end of the year is expected to show a surplus.

Paying down debt, Liberal holy writ, is sure to run second to the project of survival.

The by-election in the very safe seat of Wentworth, vacated by Malcolm Turnbull, will be a litmus test for this project.

Labor privately concedes it’s in “for a thumping”. It expects the Liberals to spend at least $1 million to save the seat because so much depends on it: the government majority for starters and Mr Morrison’s standing.