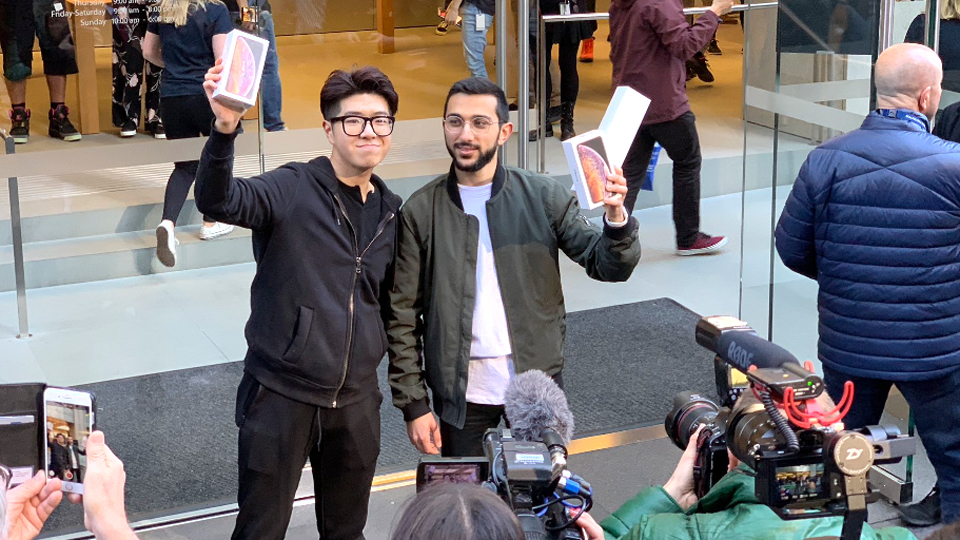 YouTubers and international entrepreneurs were among the first people in the world to buy new iPhones when they went on sale in Australia on Friday.

British duo Lucy Hutchinson and James Griffith flew into Sydney late on Thursday night, keen to be among the first in the world to get their hands on the shiny new Apple gadgets.

Ms Hutchinson and Mr Griffith are co-founders of Mous, a company that sells mobile phone cases. After their flight from Britain landed, they made a beeline for Apple’s George Street shop.

“It’s quite a scary moment for us finding out exactly what the iPhone is like,” they said.

“Before we send out our phone cases to everyone who has pre-ordered we want to just check them ourselves, so that’s why we’re in Australia. If it’s all OK, we’ll hit the big ship button.”

Global time differences meant Apple’s Australian stores were the first in the world to open. A small crowd of mainly tech reviewers and international entrepreneurs queued in Sydney to get in early.

Mazen Kourouche pre-ordered the phone but still decided to spend the night outside the shop to ensure he was at the front of the line.

Just a year ago, the YouTube tech reviewer spent 11 long days outside the shop to get his hands on the iPhone 8 model.

“Each year there is a different reason to line up,” he said on Friday morning. “Most recently it’s because of my YouTube channel, so I try to get the phone early and review it.

“It’s a great experience being first – even just being in the queue in the first place.”

The Apple Series Watch 4, with a heavy focus on health monitoring, was also launched on Friday.

The watch can take electrocardiograms and deliver that information to the wearer’s doctor. It remains unclear when an app for that will be available to Australian users.

All the way from Britain to Sydney, just to be the first with new iPhone