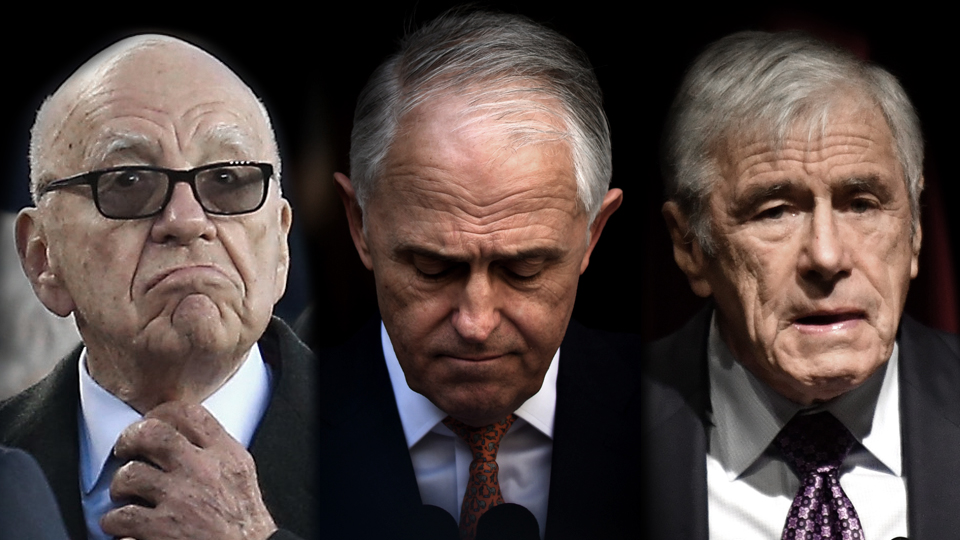 The news that billionaires Rupert Murdoch and Kerry Stokes essentially war-gamed the ousting of Prime Minister Malcolm Turnbull should appal all Australians wanting media diversity and an open and transparent polity.

But if you’re still not affronted by what reportedly happened between the two billionaires last month, consider this: if former federal treasurer Peter Costello joins the next Murdoch-Stokes confab in his role as boss of a merged Nine and Fairfax, we’ll pretty much have the entire Australian news media in on one conversation.

And they won’t need a big venue to have the discussion either. In fact, they could probably have it in a phone booth.

If the ACCC green lights the “merger” (read takeover) of Nine and Fairfax by Christmas, as seems likely, Mr Costello will chair the new entity and oversee a multi-platform business that will include TV, radio, newspapers and a host of key websites.

Put him in the same room as Mr Murdoch and Mr Stokes and if they were of a mind, they could orchestrate not only most media coverage of leadership challenges, but entire election campaigns and key government strategies and policies too.

Does this sound democratic to you?

All that would stand in the way of these media titans and any desire to shape the political future would be the editors and news directors asked or, in some cases, forced to do their bidding.

Sure, Mr Costello would need to be more mindful of shareholders and fellow directors than ‘owners’ Mr Murdoch and Mr Stokes – and I’m sure he’d discharge his corporate duties scrupulously – but it’s a scary thought that so much of the Fourth Estate could be overseen by just three men.

And each with a decidedly conservative view of the world too. Not much diversity there.

But it’s not really about Mr Costello. Indeed, if he were to relinquish his position or have it handed to a new chair in time, we’d still be left with just three ‘wise’ men running a vital part of our system.

The only people left out of the conversation would be an embattled ABC, a limp Ten Network, and a few mastheads like this one fighting to be heard above the din.

It’s another reminder that while the Turnbull government’s changes to media laws might have made some business sense, they’ve completely short-changed journalism and democracy.

If the Nine-Fairfax merger goes ahead, we have every right to fear more unsettling conversations between the individuals who control our increasingly concentrated media sector. And there’ll be even less chance of those conversations finding their way into the public sphere.

News of the Murdoch-Stokes chat first surfaced this week in Fairfax’s Australian Financial Review and was amplified on the ABC just a day later.

It suggested Mr Murdoch had told Mr Stokes during his recent Australian visit that “Malcolm has got to go”.

The West Australian billionaire reportedly replied that any leadership ructions would almost guarantee the election of a Shorten government.

To which Mr Murdoch is said to have responded that Mr Shorten would only be in for three years and he’d still make money under him anyway, just as he had under previous labor governments. (Mr Murdoch might be the only 87-year-old who could treat the passing of three years as a mere bagatelle.)

The reported conversation is as discomfiting as it’s appalling and brings into sharp relief the folly of the recent media law changes and the threat to diversity and democracy of a merged Nine and Fairfax.

The union covering journalists made this point in a submission to the ACCC this week.

“The merger, if approved, will result in the loss of distinctive voices in the media, a reduction in the resources available to conduct long-form and investigative reporting, and lower levels of public confidence in the Australian media,” the Media, Entertainment & Arts Alliance said in its submission.

Of course it will. As Melbourne University’s Andrea Carson wrote recently, “Fewer voices means more power to a few”.

Way back in 1981, Justice John Norris chaired an inquiry into the ownership and control of newspapers in Victoria and expressed a similar view. (I had the, ahem, good fortune of appearing before it.)

At the end of his lengthy hearings Sir John recommended the establishment of a tribunal to prevent further concentration of press ownership, saying: “The potential for harm, especially loss of diversity in the expression of opinion and the power of a very few men to influence the outlook and opinion of large numbers of people, is real”.

Norris passed away in 1990 without seeing his tribunal established. In fact, it never was. No one can say we weren’t warned.

Bruce Guthrie is co-founder of The New Daily and a former editor-in-chief of News Corp’s Melbourne newspaper, the Herald Sun, and Fairfax’s The Age and Sunday Age.

The growing power of media mates