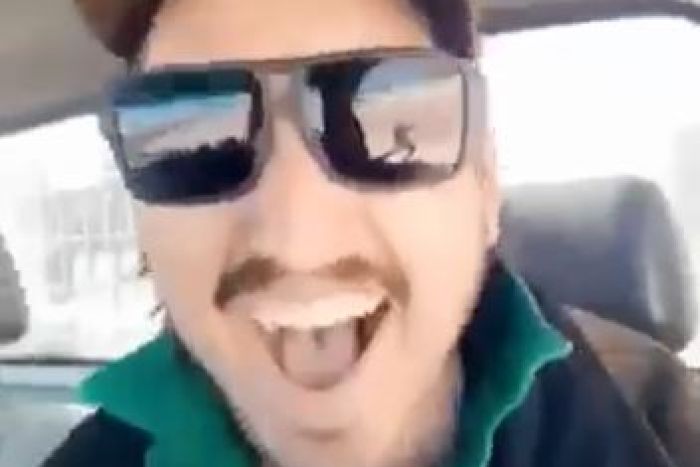 A Facebook video of man appearing to run down emus is being investigated by RSPCA Photo: ABC/Facebook

An investigation is underway into a disturbing video uploaded to Facebook this week, showing a man appearing to deliberately run over more than half a dozen emus on a dirt road in a 4WD, laughing as he does.

The video, shared on social media late on Wednesday night, has been shared more than 6000 times.

The 41-second video, filmed by the apparent driver, shows a 4WD with P-plates driving 120kph down a dirt road.

“F––king emus,” the man can be heard yelling.

About 20 seconds later he comes across a group of emus, running away from the vehicle.

The driver runs over about half a dozen of them, counting along and laughing.

An RSPCA Queensland spokesman said they were aware and investigating.

“[We are] currently examining the footage to try and determine when and where it was filmed,” the spokesman said.

“We are appealing to the public for information, and we urge anyone with any knowledge of the source of this video to contact the RSPCA or the police immediately.

“Such sickening cruelty clearly has no place in our society. The RSPCA unequivocally condemns this type of violence toward an iconic native animal. Or indeed any animal.”

Queensland police are also looking into the origin of the video, but so far don’t know for sure whether it’s from Queensland.

Hunt for driver depicted in Emu slaughter on Facebook