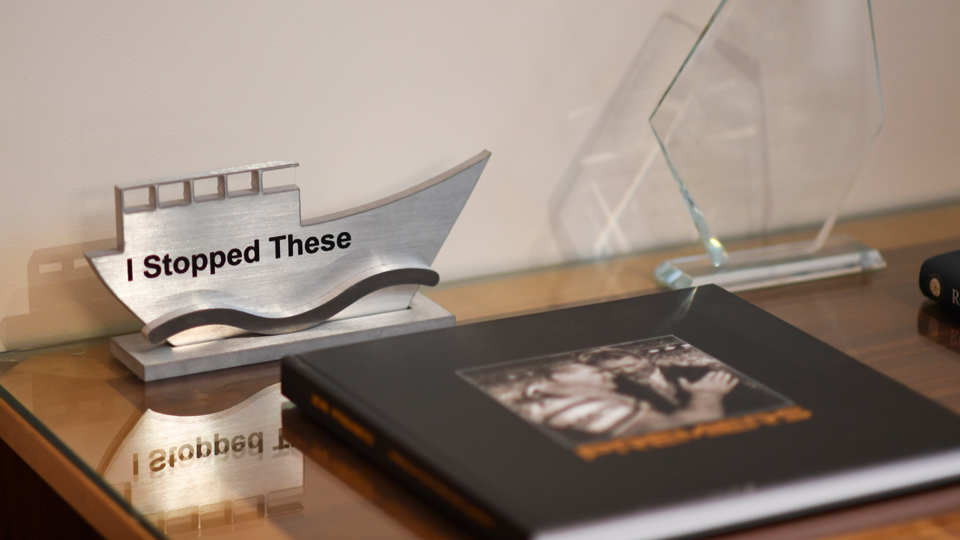 Scott Morrison has confirmed he proudly displays an ‘I stopped the boats’ trophy in his office.

The Prime Minister told The Daily Telegraph on Wednesday that the trophy was given to him by a friend who lived in his electorate.

“A mate of mine, a constituent actually, made that for me when I left the immigration portfolio many years ago,” he said.

“It was a kind gift from a friend. I don’t resile from it. We did stop boats.

“Maybe [former Labor immigration minister] Chris Bowen has one on his desk that says ‘I didn’t stop these’.”

The New York Times first reported last week that the Prime Minister kept the memento in his office.

“His office features a model migrant boat bearing the proud declaration ‘I Stopped These’, and a cabinet adorned with a Jesus shrine and a biblical proverb to ‘Trust in the Lord’,” columnist Maureen Dowd wrote on September 16.

Inspired by the piece, the AAP wire service published a photo of the office ornament, taken by Lukas Coch, earlier on Wednesday. It was snapped during a drought response meeting in Mr Morrison’s office, which journalists were invited to attend.

The trophy’s inscription does appear to be an accurate claim.

Before he was treasurer and then prime minister, Mr Morrison was Tony Abbott’s immigration and border protection minister.

From 2013, he oversaw the Coalition’s tough crackdown on maritime arrivals of asylum seekers, billed by Mr Abbott as ‘Operation Sovereign Borders’ and led by a three-star general, Angus Campbell.

As minister, Mr Morrison (and then his replacement, Peter Dutton) adhered to a strict secrecy policy, by refusing to tell the media any details of asylum seeker boats as they arrived.

One of Mr Morrison’s more infamous moments in the portfolio was in 2011, while serving as shadow immigration spokesman, when he criticised the then-Labor government of Julia Gillard for using around $300,000 of taxpayer money to fly close families of refugees who had died at sea to funerals in Sydney.

A day after making the comments, Mr Morrison said “the timing” of his comments had been “insensitive” and “inappropriate”.

“I know probably more than anyone how strongly people feel about this issue, how angry they get about the costs that are involved and I share that anger and I want to see that changed,” he told 2GB on February 16, 2011.

“But there is a time and a place.

“I rarely leave things on the field when it comes to this issue … but if you step over the mark I think you have got to say so and I am prepared to do that.

“But the government shouldn’t take that as a leave pass.”

It’s not clear from the NYT piece or the AAP photo where the boat trophy sits – whether it has a prominent place on his desk or is somewhere else in his office.