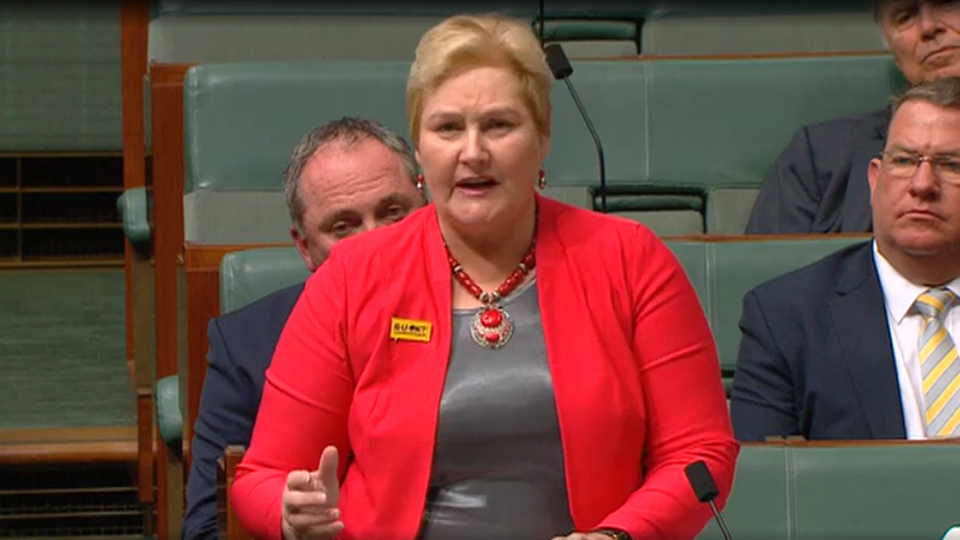 Ann Sudmalis had announced earlier in the day she would quit Parliament.

Outgoing Liberal MP Ann Sudmalis has used parliamentary privilege to launch a ferocious attack on “men who know better” inside her party, accusing them of “bullying, betrayal and backstabbing”.

In a speech to Parliament late on Monday night, Ms Sudmalis accused internal rival Gareth Ward, a NSW state Liberal MP, of “plotting and manipulation” to replace her as federal MP for Gilmore.

Earlier in the day, Ms Sudmalis confirmed she would quit Parliament at the next election. Her seat is held on a slim margin of less than 1 per cent.

After enduring a “continuing barrage” since April 2012, the “final straw” that sparked her resignation was Mr Ward’s alleged branch-stacking of the local party branch to “completely” replace committee members loyal to Ms Sudmalis with his allies, the MP said.

“This is not the first time that Gareth has flexed his vengeance on strong Liberal women. He doesn’t just get even, he annihilates anyone who opposes him,” she said.

“This was all about Gareth’s narcissistic revenge, planned and plotted. I have decided that enough is enough,” she added.

It was the latest in a string of allegations by Liberal women of bullying and intimidation at the hands of men in their party. Another female Liberal, Julia Banks, has already announced she will quit as a result.

In response, on Monday afternoon, Prime Minister Scott Morrison announced he had requested that the federal executive of the party to create a “rigorous and confidential” complaints process for members and MPs.

“I want the federal executive to include in that report their concrete plans to ensure the party continues to attract and support outstanding men and women who want to represent their party in this Parliament,” Mr Morrison told reporters.

In her blistering speech, Ms Sudmalis also alleged that local councillor Andrew Guile and John Hanscombe, editor of the Fairfax Media-owned South Coast Register, were part of the plot.

The attack, which might otherwise have given rise to defamation suits, was protected under parliamentary privilege, which makes members immune from being sued or prosecuted for what they say inside the chamber.

Both the Liberal, Mr Ward, and the newspaper editor, Mr Hanscombe, have denied the claims against them.

“If Ms Sudmalis believes the comments she’s made tonight, she should make them outside of Parliament and provide evidence,” Mr Ward said to Fairfax Media and Nine News.

Throughout the speech, Ms Sudmalis wore a yellow ‘R U OK’ badge. “Politics is a place where if you do not have great resilience, the actions of others can impact on your mental health,” she said.

The MP insisted her resignation, and the accusations against her branch, had nothing to do with the recent leadership spill in which Malcolm Turnbull was overthrown as prime minister.

“I am concerned the media will interpret my decision as a reflection on the leadership of Scott Morrison. If they do, they will be lying. Scott truly is a good man.”