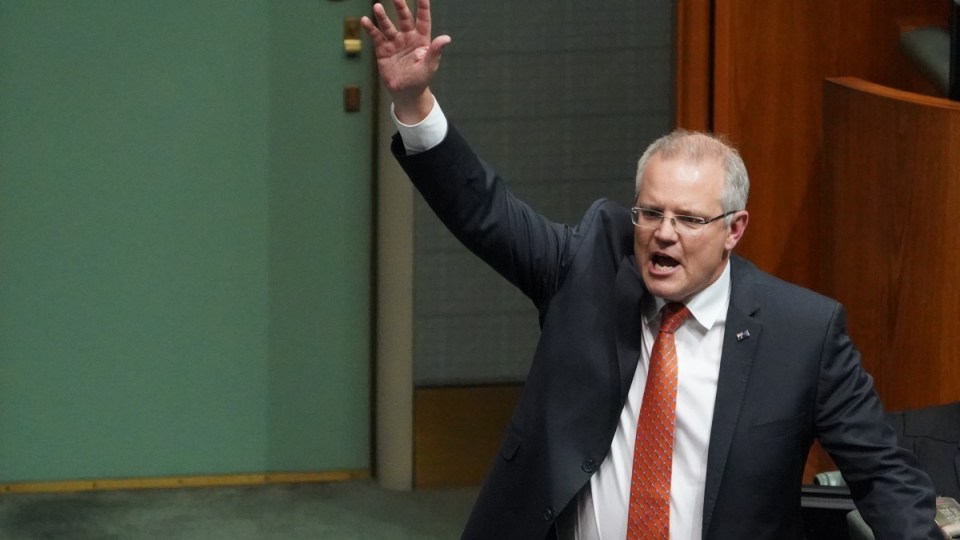 Prime Minister Scott Morrison has defended his office’s use of a controversial rap video after what has been a less than perfect third week as leader.

That was enough for Mr Morrison, the Stephen Bradbury of gold medal politics, to think: “Oh, that’s how I feel. Oh life’s good. Oh God almighty yes it is”.

The short video clip might have served as ironic comment on inequality – and actually been cool. But it was instead meant to support the bogus claim that served as the text portion of the tweet: “QT (question time) was on fire today. Good work, team”.

In fact, question time was a debacle, heavily peppered with queries such as Bill Shorten’s: “Could the Prime Minister please explain why quotas for the National Party are OK, but quotas for women are not?’’.

And Jenny Macklin’s: “Why is Malcolm Turnbull not prime minister?’’

And Tanya Plibersek’s: “Why are quotas for the National Party OK but for others are not?’’

But let’s get back to Fatman Scoop. If only the PM had scrolled down the lyric sheet he would have seen lines such as: “To all my (racially charged N-word) that they hit it from the back; Who want to have sex with no strings attached”.

Social media – so well educated in modern poetry – pounced with confounded scorn. The tweet was deleted.

Still, Morrison persisted with a happy face. “We’re just trying to connect honestly with people,” he told a beach-side press conference in Sydney on Friday after deleting the tweet. “And some of the narks will get worked up about this sort of thing but it was a bit of fun.”

What we’re really seeing here is Scott Morrison desperately hanging on to his God-given happiness – the glow of winning gold – at the end of a week where his joy was repeatedly kicked in the teeth, largely with his own feet.

The week began with 7.30 presenter Leigh Sales repeatedly asking Morrison to explain the point of Malcolm Turnbull being tossed aside and why he is now PM?

On Tuesday, the PM clumsily declared that Home Affairs Minister Peter Dutton should apologise after accusing former Border Force boss Roman Quaedvlieg of “grooming’’ a younger woman, despite grooming having blatant paedophilia connotations. Mr Morrison found himself fobbing off such connotations and looking, at the least, clueless.

Wednesday: he tweeted and supported a feedlot operator’s suggestion that the drought was a “necessary evil’’ – not a Jesus term – to cull 10 per cent of farmers. Meanwhile, it was revealed that Malcom Turnbull had been urging former colleagues to refer Peter Dutton to the High Court over his eligibility to sit in Parliament. Some MP have since said maybe that’s the way things should go.

Still, rap rhymes with crap, and maybe that’s what Mr Morrison was really trying to say.

‘Get your hands up!’: How Scott Morrison’s happiness was bushwhacked