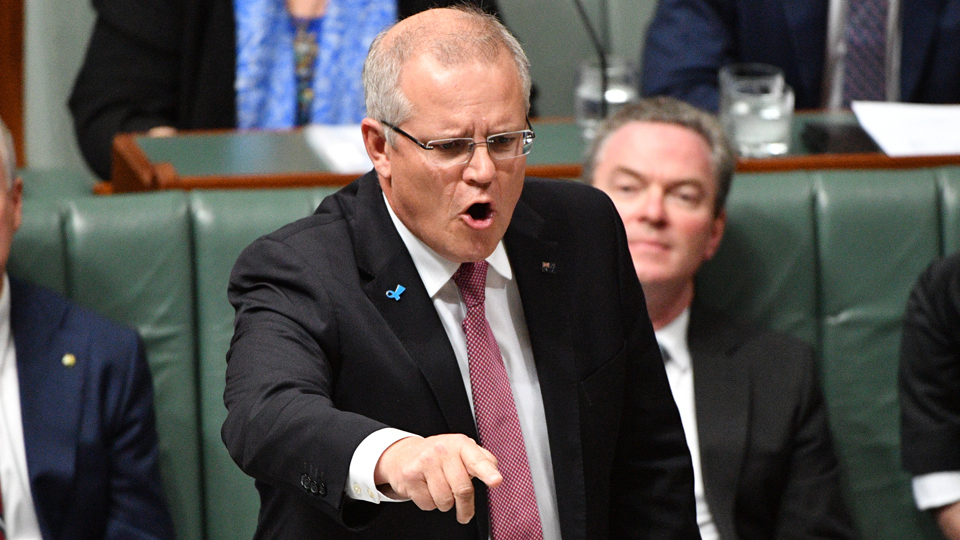 The Prime Minister says he has no bullying MPs. Photo: AAP

“Get over it” is Scott Morrison’s latest response to the niggling question of why he is now the Prime Minister.

In Wednesday’s question time, Labor seized on an extraordinary TV exchange the night before, where the Prime Minister refused six times to answer for why his party dumped Malcolm Turnbull.

It followed days of the same question by Labor and journalists. Each time, Mr Morrison has said, without elaborating, that it was his party’s decision.

“I think it is time for the Leader of the Opposition to get over it. Get over it!” Mr Morrison shouted at Labor leader Bill Shorten.

“It’s time for you to focus on the things that matter to the Australian people.”

He was more forthcoming on the financial services royal commission. He admitted “deep regret” for not calling the inquiry sooner, and said recent allegations were “deeply disturbing”.

He blamed Labor for not fixing problems in the sector sooner.

“They did nothing when they were in government, and again it’s up to us to clean up Labor’s mess,” Treasurer Josh Frydenberg added.

Unlike his volcanic performance on Tuesday, Mr Dutton kept his answers brief. “I’ve recused myself from discussions where it’s been deemed appropriated,” he said, an apparent admission he participated in some childcare discussions in cabinet, but not others.

He added he had seen “some erroneous media reports” to the contrary.

The journalist he might have been referring to, The Guardian‘s Karen Middleton, retorted by challenging the minister to “declare clearly” he had recused himself from all cabinet discussions on childcare.

Mr Morrison promised Parliament he would “make inquiries” to find out if Mr Dutton had in fact recused himself from “every” childcare discussion.

Labor asked if his decision to recuse himself from at least some cabinet discussions was an acknowledgement he had a conflict of interest.

“The answer is no,” he replied.

It was a much less animated performance by Mr Dutton, after Tuesday when he used the cover of parliamentary privilege to accuse former Border Force boss Roman Quaedvlieg of “grooming” his adult girlfriend, who was also employed at the time by Border Force.

Pressed by Labor, Mr Morrison also categorically denied there had been any bullying of women in his party during the leadership saga. “I’m satisfied there was no gender-specific lobbying or pressure placed on members,” he said.

Labor accused Mr Morrison of having “tweeted and authorised” a video containing a statement saying “drought is a necessary evil, it can help cut out that bottom 10 per cent that probably shouldn’t be there anyway”.

“Neither [Tony Abbott] nor Malcolm Turnbull would ever have promoted a statement like that,” Labor’s Joel Fitzgibbon said.

Another perspective on the drought: Feedlot operators from North West NSW, Michael in Bellata and Sandy from near Moree, explain what the drought means for them. pic.twitter.com/emn2v4sG3s

“Why is it that at the same time Australians are making an extraordinary effort to help our farmers in drought, the Prime Minister is promoting material that dismisses those farmers hurting most?”

The Prime Minister clarified that the video, posted on his official Twitter page, was simply the opinions of several feed lot operators in rural NSW.

“The Labor Party might want to close their ears to the voices of the bush, but the Liberal-National government never will,” he said.

Pushed on climate action, Mr Morrison insisted: “Australians are doers not talkers about these things.”

Earlier in the day, Speaker Tony Smith announced that a by-election to replace Mr Turnbull in the seat of Wentworth would be held on October 20.

Scott Morrison’s message to puzzled nation: ‘Get over it’