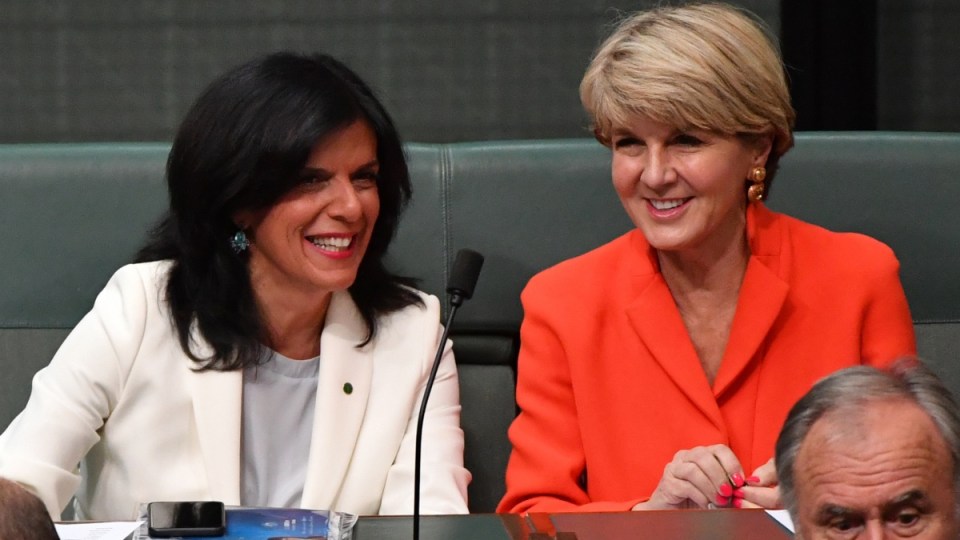 The Federal Liberal Party is torn about how to boost the number of women in Parliament.

Federal Labor has quotas and nearly half of all federal ALP MPs are women.

“Where we find ourselves today is at a disproportionate representation of men versus women,” Mr Laundy told The Australian.

The issue is raging again inside the party as it deals with the fallout from the leadership change, where women have reported being bullied.

And one of the male candidates for Mr Turnbull’s seat of Wentworth has withdrawn, saying a woman should be picked instead.

Andrew Bragg, who was widely considered the frontrunner for Wentworth, urged the party to pre-select a woman.

He linked his decision to withdraw to federal member for Chisolm, Julia Banks’s, decision not to contest the next election.

She said the Liberal Party had a culture of bullying and intimidating women.

Mr Bragg said her allegations genuinely shocked him and her resignation was, “an enormous step in the wrong direction for the party”.

“Julia Banks is an incredibly impressive woman who has made it in the upper echelons of corporate Australia,” he said.

Prime Minister Scott Morrison is not yielding to the pressure for quotas.

“I am a merit person and the party members will decide our candidate in Wentworth,” Mr Morrison told 2GB.

“Of course I want to see more women in the Federal Parliament.

When challenged about the allegations of bullying, Mr Morrison said the party whips provided pastoral care for MPs.

But Liberal whip Rowan Ramsey was vague today when asked about bullying.

“I haven’t seen any of that,” Mr Ramsey told reporters.

“I am aware of the reports and I guess we will see how that unfolds … [what] those people who feel they have been offended want to say about that in the longer term.”

The ABC spoke to a number of MPs who said they had not heard anything from the whip’s office about how the complaints were being dealt with.

“We are a moderate, considerate society and we need to all treat people with respect,” Mr Ramsey said.

“There are plenty of people I have disagreements with but I do my utmost to treat them with respect and consideration. So should we all,” he said.

Mr Ramsey said he was prepared to consider Mr Laundy’s call for quotas.

“I think we have struggled for a long time and wondered why it is that we don’t have more female members of Parliament,” he said.

“And I don’t think it is good enough.”

But he acknowledged how troubling it was for many Liberals.

“We are a democratic party that puts great faith in its pre-selection processes, that is one of the great privileges of being a member of the the Liberal Party is you get to pick your candidate,” he said.

“To go and then interfere with that process is something that runs against the grain for a lot of Liberals, but we certainly have to do better.”

Mr Ramsey said he could not explain why more Liberal women did not run for election.

“It is a bit of a mystery why we don’t have more women in the Parliament, because in fact we have plenty of women participating right throughout the the lay party, very talented people, and maybe it is something about the workplace that is making them reluctant,” he said.

“I often think it is probably easier for people who have family to operate in a state parliament than it is to operate in the Federal Parliament,” Mr Ramsey said.

Liberals grapple with how to boost number of female MPs