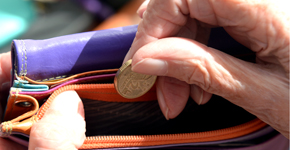 Australians will now not have to wait to 70 to get the pension. Photo: AAP

The Liberal Party has for years been trying to raise the pension age from 67, but Mr Morrison announced on Wednesday he would no longer pursue the change, which was yet to be legislated.

The planned move to 70 was highly controversial. The Labor opposition, unions and pensioner groups said it would force people, in their later years, who were physically unable to find work, or find a job, into poverty, living on Newstart benefits while waiting for retirement.

“Next week, cabinet will be ratifying a decision to reverse taking the pension – the retirement age – to 70. It will remain at 67,” Mr Morrison told Channel Nine.

“I don’t think we need that measure any longer when it comes to raising the pension age, and that’s one of the things I’ll be changing pretty quickly.

“I’ve been talking to my colleagues about it, we’ll ratify it next week, the pension age going to 70 is gone.”

Rather than make the announcement as planned when parliament resumes in Canberra next week, Mr Morrison chose to disclose the government’s decision during a live Q&A with the public on morning show Today.

#BREAKING: Scott Morrison has announced the Coalition will no longer be raising the pension age to 70. #9Today pic.twitter.com/eTn0BuEaeC

Pension groups welcomed the decision to abandon plans to lift the retirement age.

The Combined Pensioners and Superannuants Association said the move made sense and meant that many of the 100,000 people over 50 who are on the Newstart allowance would not have to wait an extra three years for the age pension.

“CPSA is very pleased that sustained campaigning against the pension-age-to-70 policy has paid off,” the non-profit group’s Paul Versteege said.

The plan to lift the retirement age was first raised in the maiden budget of the Abbott government in 2014.

During Senate estimates this year, the government confirmed raising the retirement age to 70 remained its intention.

The age was to rise six months every two years until eligibility reached 70 in 2035.

The move would have saved the budget an estimated $3.6 billion in its first four years.

Labor increased the retirement age from 65 to 67 while in government. It later argued against an increase to 70, saying it would leave Australia with a higher retirement age than other developed nations such as the US, Britain, Canada and New Zealand.