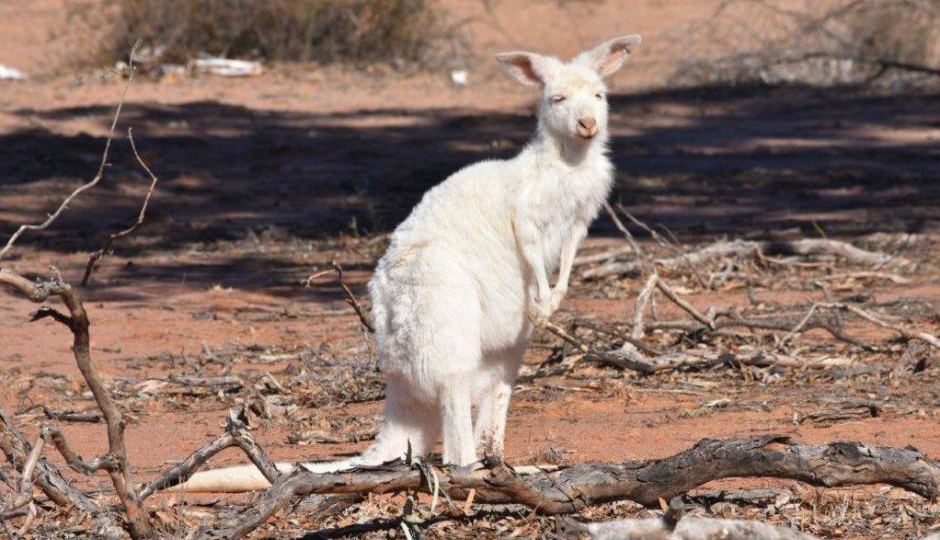 A once rare sight, reports of white kangaroos are increasing. Photo: Ben Strong

Drought and the long-term effect of the dingo fence are being thanked by experts for an increase in sightings of rare white kangaroos across the outback.

The white kangaroo phenomena are the result of either albinism – a genetic mutation causing total lack of pigmentation to the hair, eyes and skin – or leucism, a fault in the pigment cells that may cause white fur, but usually the skin and eyes are unaffected.

Ben Strong, owner of the Wanaaring Store and Caravan Park, shared an image of a white kangaroo in his area and said he was surprised at the response from other parts of the state.

“As far as I know there’s quite a few around in places,” he said.

“Albinos often get picked off from a fairly young age by predators,” he said.

“Also a lack of pigment in their eyes puts them at a big disadvantage in terms of just general survival in the wild.”

Australia’s 5614-kilometre dingo fence is one of the longest structures in the world and has kept dingoes and wild dogs mostly out of south-east parts of the country since the 1880s.

“Over a lengthy period of time we’ve pushed our top order predator here on the mainland up over the dog fence, and by doing that we’ve upset the balance a bit,” he said.

“Kangaroo abundance is very high at the moment, way higher than they would naturally have been.”

Dr Taggart said higher numbers and fewer threats may be part of the reason for an increase in the occurrence of white kangaroos.

“If there’s no dingoes in the landscape because they’re all north of the dog fence, these colour morphs are able to persist and breed, and so the presence of that colour morph may increase.”

The pull of the drought

As drought worsens across the country, many animals are moving closer to human habitation in search of food and water.

Dr Taggart said that may also account for an increase in sightings.

“Being drier at the moment some of the kangaroos might be more be more inclined to come in close to settled areas and so people might be observing more,” he said.

And the novelty factor of the white kangaroo may be working to its advantage in drought conditions.

He said his time watching her had led him to believe mobs could develop a protective behaviour around an animal vulnerable to predators and curious humans.

“In Kalari’s case a lot of the public knew about it, so people would pull up and there were a lot of noticeable behaviour changes in the mob,” he said.

“They would have this little ring effect, where you’d see the grey kangaroos surrounding her quite heavily.”

Mr Watharow said the same instinct prevailed in the mob even into the next generation.

“She grew up protected from predation by foxes and wild dogs. The mob would surround her and protect her because she stood out really vividly and they knew that,” he said.

“When she became a mother, she had a grey kangaroo and the mob would still be quite protective.

“They’d surround the white kangaroo and her joey. You’d see it very dramatically. That’s an adaptation within the mob.”