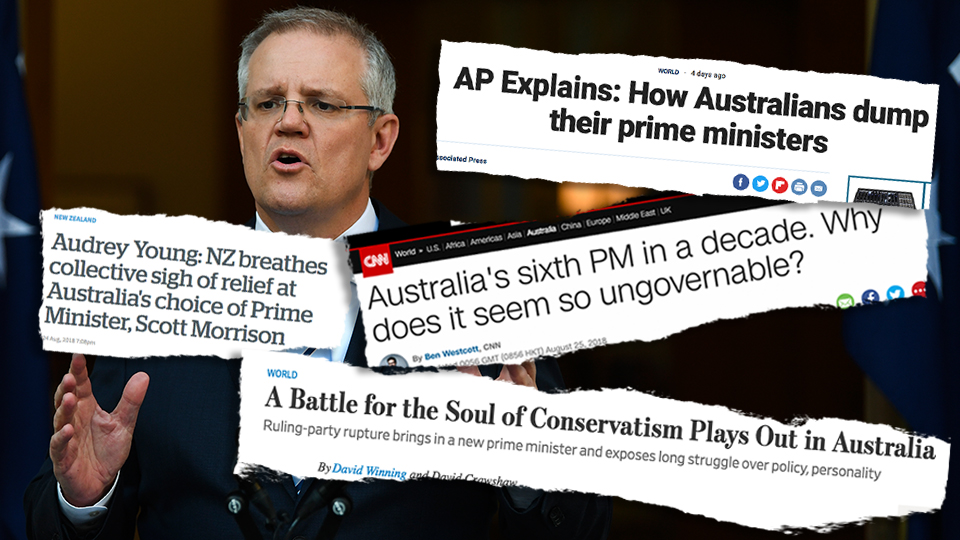 Scott Morrison's sudden rise to power has been met with confusion, ridicule and relief.

The world is equal parts bemused and disgusted by Australia’s latest loss of leader, if global headlines are anything to go by.

Scott Morrison’s unexpected rise, Malcolm Turnbull’s shock fall, and the role of arch plotter Peter Dutton was covered closely by many global media outlets, especially in the US.

CNN accused Australia of seeming “so ungovernable” as it carefully explained the machinations behind the ‘merry-go-round’ of new leaders in Canberra.

Australian politics “can more often resemble that of a coup-prone banana republic” than the dignified office one might expect of a first-world nation, it reported.

They also took note of the fact that new PM Scott Morrison is an evangelical Christian, and had pushed for increased legal protections for religious freedom.

“Whether he will make these culture war issues a major part of his time in office remains an open question,” it concluded.

In the future, everyone will be Prime Minister of Australia for 15 minutes pic.twitter.com/LsYx4IDqDm

Fox News described the febrile climate as “a new era of political instability that most Australians hate”.

‘A Battle for the Soul of Conservatism Plays Out in Australia’ declared The Wall Street Journal, referring to the battle inside the Liberal Party.

After the dust settled, The Washington Post said the spill was evidence of a “decline in party politics” and noted that under Mr Morrison, “Australia may well drift to the right”.

In the UK, the BBC described the Australian reaction to the parliamentary coup as “a mixture of bemusement, anger and sheer frustration” and labelled the week as “one of the most chaotic in Australian political history”.

The UK Times placed credit with the people, reporting that Australians had put the “ruthless political elite in [the] doghouse” as well as suggesting we had been left stunned by our leaders’ “dog-eat-dog” antics.

“Any time New Zealanders get despondent about their politics they can look across the Tasman” jibed the New Zealand Herald, reporting that “there was a collective sigh of relief across New Zealand that Scott Morrison beat Peter Dutton for the Liberal Party leadership in Australia …”

China’s state media The Global Times ran fairly conventional coverage of the spill on their English-language site, musing over whether or not Mr Morrison would “reach out” to Beijing.

According to the Australian Financial Review, however, their Chinese-language site was much more critical. It reported the Liberal government had “collapsed” and derided Peter Dutton as “a low version of [Donald] Trump”.

“This is the most embarrassing situation in Australian politics,” it opined.

On social news site Reddit, users were even more critical.

“Everything OK over there Australia? Your national leadership role has the retention rate of a downtown McDonald’s,” one user quipped.

Elsewhere on the site, Australia’s precarious prime ministership was used as shorthand for rapid, unpredictable change.

Bloomberg made what is arguably one of the more even-handed observations, reporting that in Australia, “prosperity doesn’t equal stability” and that while other Western nations often blame their political instability on the 2008 global financial crisis, Australia did not have a recession and yet had still burned through five leaders since 2007.

This came with the disclaimer that “plenty of Australians, however, don’t feel like they are enjoying a boom”.

To the world, Australia’s government is a big fat joke