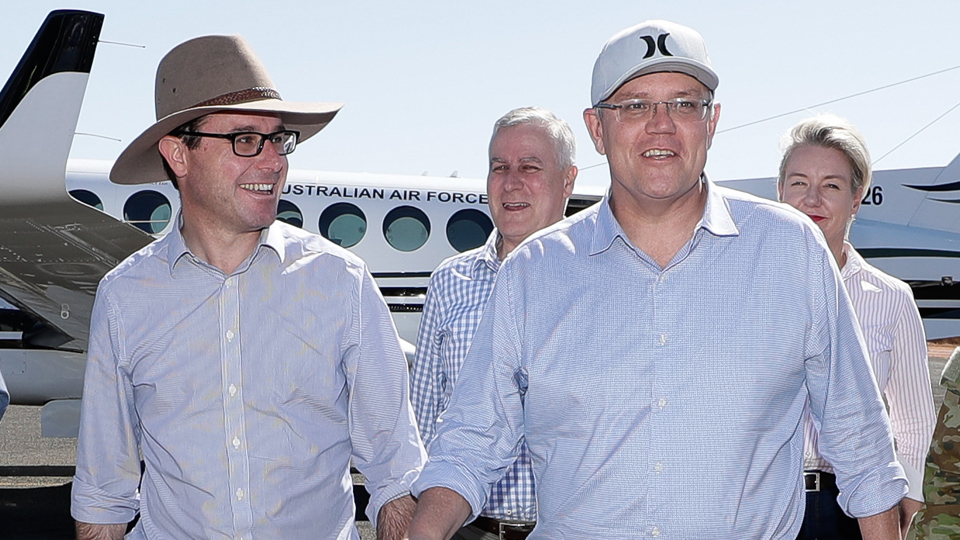 Scott Morrison may have already lived up to his “new generation” slogan by going Akubra-less in drought-stricken outback Queensland.

Despite the crippling lack of water, the Prime Minister greeted parched farmers in Quilpie in a surf-brand baseball cap.

Unlike the Australian Akubra, Hurley is a US-based multinational.

The other brand name that got plenty of attention – Malcolm Turnbull. The new Prime Minister has no new policy announcements to make while on his tour of Queensland, so he was forced to talk up what his predecessor had already announced.

“Our government under Malcolm Turnbull and today under me is 100 per cent focused on what we need to do as a nation together to ensure there is not just relief from the drought but recovery from the drought,” Mr Morrison said.

And again: “The reason I’ve asked Major General [Stephen] Day to continue on the work that Malcolm Turnbull asked him to start with the Deputy Prime Minister is because we need a national response to what this drought is.”

Mr Morrison has promised that the drought in Queensland, NSW, Victoria and South Australia will be his top priority.

When pushed on whether he would announce anything new, Mr Morrison said “we will look at every option”.

The drought package is an ongoing thing. It doesn’t sort of get announced one day and then that’s it. It goes on as long as the drought goes on.

We need the ideas to keep coming as long as the drought goes on and beyond,” he said.

And then another reference to his predecessor: “An enormous amount has already been done under Prime Minister Turnbull and I’m seeking to continue that work by being responsive.”

There was also no escaping questions about the leadership saga.

Mr Morrison was asked to comment on Tony Abbott’s pronouncement, earlier in the day, that “the era of the political assassin is over”.

His response: “I think Australians would welcome the fact that that period of time is over. It should be over.”

In announcing his new ministry on Sunday, Mr Morrison sought to heal divisions by keeping key conservative plotters, such as Peter Dutton, Greg Hunt and Angus Taylor, on the inside.

He even offered Mr Abbott the new role of special envoy for Indigenous affairs.

But the former PM has appeared none too pleased with the offer, prompting a reporter to ask if Mr Abbott was “being ungracious”.

“Tony and I are continuing to talk about the role he can play,” Mr Morrison replied.

If Mr Morrison was hoping to ‘ride the wave’ of popular support that usually greets a new leader, Sunday’s Newspoll would have disabused him of that notion.