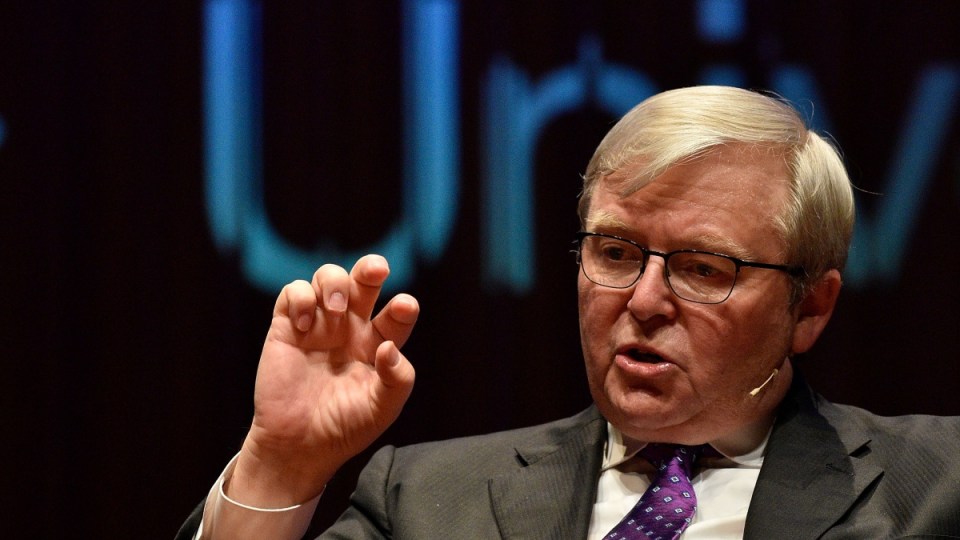 Mr Rudd used an opinion piece in The Sydney Morning Herald on Monday to attack Mr Murdoch in the wake of last week’s leadership coup.

“Murdoch is not just a news organisation,” he wrote. “Murdoch operates as a political party, acting in pursuit of clearly defined commercial interests, in addition to his far-right ideological world view.”

Mr Rudd said the position taken by Murdoch newspapers had made Brexit a reality in Britain, while his Fox News had led first to the rise of the Tea Party and then Donald Trump’s “hostile takeover” of the Republican party.

“In Australia, as in America, Murdoch has campaigned for decades in support of tax cuts for the wealthy, killing action on climate change and destroying anything approximating multiculturalism,” he wrote.

“What’s unique about Australia is Murdoch owns two-thirds of the country’s print media. No other democracy has anything approaching his effective media monopoly.”

He said the situation had been made worse by the electronic media being stripped of journalists.

“Murdoch’s print media has a disproportionate impact on setting the day’s overall agenda,” he said. “The electronics often just ‘rip and read’ what Murdoch has put on the front page.”

It's time for a Royal Commission into abuse of near monopoly by Murdoch media in Australian politics & policy. Including Murdoch & Abbott killing the NBN (FTTP) to protect Murdoch's commercial interest in Foxtel from real competition from Netflix & others. https://t.co/A4e1xTCJ5v pic.twitter.com/5qv47WBYF9

Mr Rudd said “opinion” and “news” had become one in Mr Murdoch’s papers – and the Murdoch version of fake news predated the term becoming popular after the 2016 presidential election in the US.

“Murdoch is also a political bully and a thug who for many years has hired bullies as his editors,” he said.

“The message to Australian politicians is clear: either toe the line on what Murdoch wants or he kills you politically.

“I know dozens of politicians, business leaders, academics and journalists, both left and right, too frightened to take Murdoch on because they fear the repercussions for them personally. They have seen what happens to people who have challenged Murdoch’s interests as Murdoch then sets out to destroy them.”

Former prime minister Malcolm Turnbull also took a swipe at elements of the media in his final speech as PM on Friday.

“There was a determined insurgency from a number of people both in the party room and backed by voices, powerful voices, in the media,” he said of the leadership spills that consumed last week. “[They wanted] certainly [to] bring down my prime ministership. It was extraordinary.”

Speaking on the Today show on Friday, he said certain sections of the media were helping to destabilise the government and “waging a war against the prime minister of Australia”.

“If they are making phone calls to people, trying to push people over the line, they’re part of this story,” he said.

Uhlmann targeted The Australian and Daily Telegraph newspapers, as well as 2GB hosts Alan Jones and Ray Hadley for their conduct. He also singled out Sky News.

“Sky after dark has been running a campaign against Malcolm Turnbull. Sky after dark at the moment is turning Liberal National Party voters into One Nation voters and they are not coming back,” he said.

Daily Telegraph political editor Sharri Markson was quick to fire back when Today crossed to her and Ulhmann. She described the comments as a “quite disgusting and outrageous attack”.

“At not one point has The Daily Telegraph or The Australian newspaper advocated for any change whatsoever,” she said. “We have just brought everyone the news of what was going on behind the scenes first and that is what journalists should do.”

Former editor of the Herald Sun and Editorial co-founder to The New Daily Bruce Guthrie wrote in a column last week that it was no surprise the PM was deposed only weeks after Mr Murdoch visited Australia.

Kevin Rudd: Murdoch is a ‘cancer on Australian democracy’