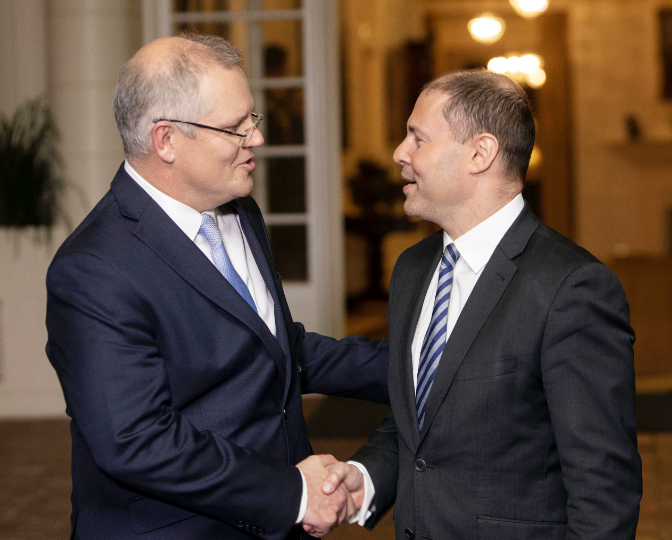 Scott Morrison and Josh Freydenberg press the flesh at Government House after being sworn in. Now comes the hard part. Photo: AAP/Andrew Taylor

A new Prime Minister, a bitter feud between his party’s left and right, polls that suggest electoral oblivion is just around the corner, a defeated rival and an ex-PM who has made sniping art form – that’s the poison chalice Scott Morrison has inherited.

MPs filed into the party room meeting at 12.20pm, later than initially scheduled but enthusiastic early arrivals didn’t seem to mind the delay, with the first to front the cameras sporting broad smiles.

Later attendees looked increasingly ashen-faced, with Mr Turnbull among the last to enter – and the glummest.

While the 40 supporters who voted against a spill surprised observers, the doomed leader knew all too well that the numbers were against him and his political career was about to be put out of its misery.

For Mr Turnbull, the tumultuous day’s only consolation would be hobbling the ambitions of Mr Dutton, whom he lashed in his resignation address hours later as a “wrecker” and his enemy’s backers as “insurgents”.

“Insofar as there has been chaos this week, it has been created by the wreckers.”

Mr Morrison skated over the divisions that had just seen yet another elected prime minister turfed by his own party.

He made the appropriate noises when delivering his first prime ministerial address, citing as his top priority a concerted effort to ease the misery of Australia’s drought-stricken farmers.

And he vowed to lead a government that would “be for everyone”.

“There has been a lot of talk this week about whose side people are on in this building,” he said on Friday afternoon, standing next to his deputy leader Josh Frydenberg – whom he also announced as his new treasurer.

“And what Josh and I are here to tell you, as the new generation of Liberal leadership, is that we are on your side.

“That’s what matters. We are on your side.”

After that, it was off to Yarralumla, where Governor-General Peter Cosgrove administered the oath of office and congratulated Mr Morrison as “Australia’s thirtieth prime minister”.

Minutes later it was Mr Frydenberg’s turn to be sworn in and the government’s new leadership could begin building bridges – or rather, trying to reach out to Mr Dutton’s mutineers.

As a Dutton-supporting Liberal quipped when news of Mr Morrison’s ascent emerged, “We put the Italians to shame when it comes to collapsing governments.”

The big question and the greater headache for Mr Morrison: will the right wing of his party accept that their interests and ideologies are represented by the man who was Malcolm Turnbull’s Treasurer, internal ally and, until Friday morning, vocal public supporter?

With Mr Dutton as the dissident faction’s narrowly vanquished but unbowed champion and Tony Abbott taking his trademark pot shots, countering the lingering resentment for Mr Turnbull and those who supported him will be Mr Morrison’s first chore.

Can he pull it off? Unlikely, given that energy policy prompted this past week’s civil war, its often bizarre twists and turns and, much to the departing PM’s bitter regret, the moving van that will shortly pull up outside The Lodge.

The first is the sky-high cost of gas and electricity. The second is immigration.

On both those issues, going by his past statements, there can be little hope of common ground.

The Dutton faction sees an electricity market distorted by mandatory purchasing preferences for renewable sources, mostly wind and solar, with hard-line climate deniers such as NSW MP Craig Kelly demanding an end to all subsidies and a greater reliance on coal.

Mr Morrison has sent mixed signals on his attitude to the energy mix, in April ridiculing proposals for the construction of a coal-burning power station which Mr Abbott and others want the federal government to build and run.

“You don’t just open up one down the road and all of a sudden it is producing power at the same price as Bayswater or any of the others,” Morrison said. “That is just not an economic fact.”

Before that, however, what renewables supporters remember most vividly is Mr Morrison brandishing a lump of black coal during Question Time and mockingly telling Labor and the Greens that they had no need to run from the chamber in fear of their lives.

If the Dutton forces see that comment as reason to hope that subsidies for wind farms and solar installations will be cut or eliminated, Mr Frydenberg’s position as deputy leader should chill their optimism.

He was a prime architect and chief salesman for Mr Turnbull’s aborted National Energy Guarantee and, on the strength of his own words, a keen backer of the transition to renewables.

On immigration, that other thorny issue, the gulf is perhaps even wider.

Mr Morrison has supported a high annual intake, arguing that some 250,000 new arrivals every year are needed to keep the economy growing.

“If you cut the level of permanent immigration by 80,000 it would cost the budget, it would hit the bottom line — the deficit — by $4 billion to $5 billion over the next four years,” he said earlier this year when dismissing Mr Abbott’s call for an annual reduction of 80,000 new arrivals.

The Dutton forces vehemently dispute this, painting current immigration policies as a con job. Sure, the economy is growing, they concede, but individual wealth isn’t going anywhere, least of all fast, and wages have stagnated for far too long.

Migration expands the labour pool and acts as a break on wages by increasing the supply of available workers. At the same time it forces up property prices, leads to packed trains and traffic-clogged roads as major cities’ populations explode.

So there is another circle Mr Morrison will need to square if he is to settle the internal civil war and stand even a remote chance of foiling Labor come election time.

For the moment, though, it is the calm after the party room storm.

Just how calm it will remain and for how long may well depend on the faces Mr Morrison selects for his Cabinet. The inclusion of Mr Dutton, allowing that he is prepared to accept and such an invitation is actually extended, might suppress further talk of revolt in the short term.

But after that? The new PM’s problem will be finessing his party’s factions into a cohesive and unified whole that speaks with one voice and keeps its disagreements behind closed doors..

He is going to have his work cut out.