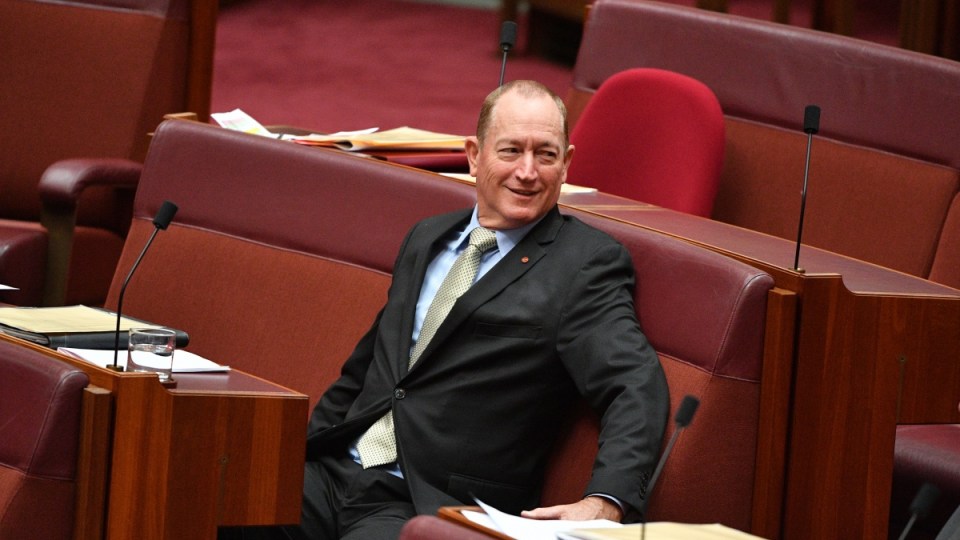 One person who won't be returning to the red benches is Queensland's Fraser Anning. Photo: AAP

Senator Fraser Anning’s inflammatory “final solution” speech in the Senate this week not only sparked near-universal condemnation from across politics, but also renewed questions about whether the nation’s upper house is fit for purpose.

Since Senator Anning’s call for a public vote on a return to the White Australia policy, critics have pointed out that his claim to a mandate is tenuous at best.

The Gladstone hotelier received just 19 primary votes at the 2016 election, but was elected on the One Nation ticket for Queensland after No. 2 pick, Malcolm Roberts, was disqualified over his dual citizenship.

After a public falling out with One Nation leader Pauline Hanson, Senator Anning sat as an independent senator before joining Katter’s Australian Party in June.

Criticisms of the makeup and power of the Senate, whose voting system gives greater representation to fringe and niche voices than the House of Representatives, are nothing new.

Last year, Tony Abbott, who as prime minister complained of a “feral” Senate stymieing his agenda, proposed reforms to allow a joint sitting of Parliament to pass legislation that has been twice rejected by the Senate.

Such a change, which would require a constitutional referendum, would neuter the Senate’s power to block legislation outright, downgrading it to a body more similar to the House of Lords in the UK.

At present, the Constitution stipulates that a double-dissolution election must be called before a joint session of Parliament can pass rejected bills.

While constitutional reform has failed to get off the ground, successive governments have tinkered with the voting rules for the upper house.

In 2016, the Turnbull government passed reforms designed to make it harder for fringe voices to get elected by preventing micro parties from swapping preferences.

Despite the changes, the 2016 election produced a record 20 Senate crossbenchers.

With the effectiveness of the Senate back in the spotlight, The New Daily asked political and constitutional experts if they thought the upper house was working properly and how it might be reformed.

Dr Williams, one of the country’s top experts on constitutional law, believes the dual-citizenship crisis exposed flaws in Senate procedures that resulted in the election of fringe members with little popular support.

“I think it’s exacerbated at the moment because the Senate is full of people who were never originally elected to the Senate, like Fraser Anning, and they’ve come there and then left their parties, and, as I say, they are not representing anyone really because they’ve been elected on a party ticket which they’ve left,” Dr Williams said.

“[Because they] don’t have any high prospect of re-election in the future … it means they’ve got nothing to lose, and there’s no particular reason they need to act in rational or sensible ways and they can let loose or let fire as they wish, without consequence in a way that would not normally be the case.”

Dr Williams believes new rules should be introduced to force senators who leave their party to resign their seats.

“They have no allegiance to a party, they’ve got no mandate, and my view is one reform there would be to say that if you are elected for a party you need to stick with that party unless you resign from the Senate.”

To reduce legislative gridlock, Dr Williams argues that a joint session of Parliament should be able to pass rejected bills after an election – an alternative to Mr Abbott’s proposals that would give the public a say on contentious legislation.

“I think after every election it should be possible to put to a joint sitting any legislation that the Senate has rejected in the prior Parliament,” he said.

“It’s a bit like what we’ve already got for double dissolutions, but you wouldn’t need to dissolve the whole of Parliament to do it. You’d have this mechanism for a joint sitting after every election.”

Professor Saunders sees a glut of fringe voices in the Senate, partly as a result of a lack of bipartisanship between the major parties, creating a “winner takes all” approach to politics in Australia.

“If you can get broad-based policy positions on at least some issues, and not just broad-based across the parties but I think across the levels of government as well, then the fact that there are a few characters in the Senate, perhaps representing outside fringes of Australian thought, becomes less important,” she said.

Professor Saunders also believes it is important to consider the value of having unconventional voices in the Senate, such as Ricky Muir, who was elected on 0.51 percent of the primary vote in the 2013 election on a ticket for the Australian Motoring Enthusiast Party.

“Everybody threw their hands up in the air at the time of his election as well and said ‘how can someone from such an obscure party be elected on such a small number of votes?’,” she said.

“In a way, that’s a fair enough question. On the other hand, he turned out to be quite an interesting bloke to have in the Senate, who thought pretty hard about the positions he took and was transparent about why he took them.

“So I think we need to weigh those sort of things in the balance.”

Although the Senate has been often blamed for creating gridlock, Professor Twomey cautions against overlooking its important function of blocking and revising bad legislation.

“If it is obstructive only, however, for party-political purposes and not on the basis of trying to improve legislation, if it just simply rejects everything in a negative kind of way, then you do have a genuine problem,” she said.

Is the Senate broken? The fringe voices with a lot of clout