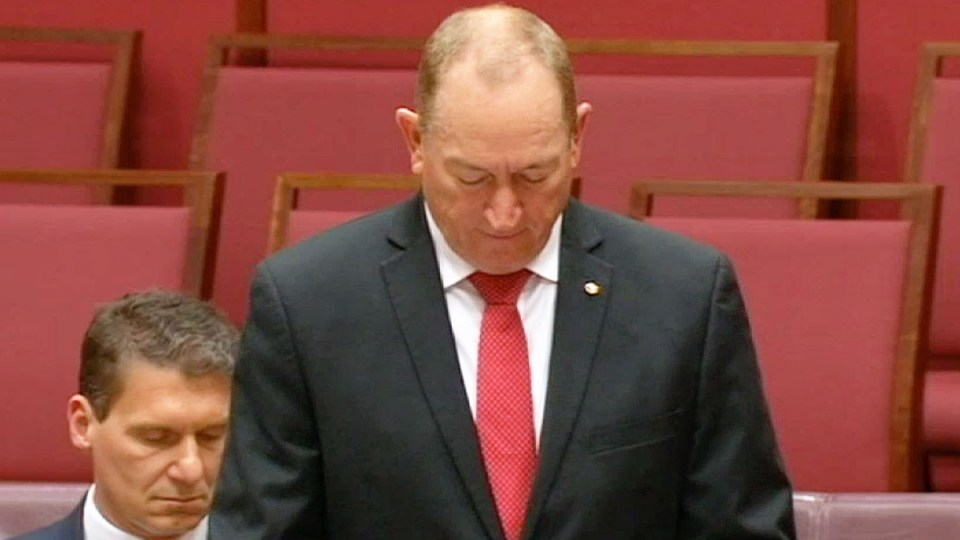 "I don't need to be told what I should say in this country," Senator Anning says. Photo: ABC

Queensland Senator Fraser Anning has no regrets and won’t apologise after calling for a “final solution” to immigration in his widely-criticised maiden speech.

“I support everything he said … it was a magnificent speech,” Mt Katter said, ignoring widespread condemnation and a parliamentary censure debate.

Senator Anning, from The Katter’s Australia Party, is unapologetic for using the phrase historically associated with the World War II Nazi Germany plan to murder Jewish people on an industrial scale.

His first speech called for immigration that favoured “European Christian” values and a plebiscite on which migrants can come to Australia.

“The final solution to the immigration problem is, of course, a popular vote,” he told the Senate on Tuesday night.

He later claimed to be simply referring to the “ultimate solution” to a political question.

“It was just two words,” Senator Anning told Sky News on Wednesday morning. “The ‘thought police’ jumped on it.”

“I don’t need to be told what I should say in this country,’ he said.

“It wasn’t deliberately meant to be directed at anybody.”

Mr Frydenberg, whose Hungarian mother escaped the Nazi Holocaust, was disgusted by the speech.

“These comments by a member of the Australian parliament were ignorant and insensitive, they were hurtful and they were divisive,” Mr Frydenberg told Sky News.

“I call on Fraser Anning not only to apologise, but also to go and visit a Holocaust museum, and to hear first-hand from the survivors how the pain is still raw, and to see the devastation and destruction caused by the Nazi war machine.”

At least 1.5 million children were killed in the Holocaust.

“And Fraser Anning is a father,” Mr Frydenberg said. “Let alone the 10 million people that were killed by the Nazis, of which six million were Jews.”

He has no excuse and needs to quickly apologise.”

Australia is a nation built by people from every part of this world; a strong, independent, multicultural nation.

We must continue to promote inclusion by rejecting all forms of racism. pic.twitter.com/kTnEZLIqNs

“If people want to take it out of context that’s entirely up to them,” he told Channel Nine.

“It was never meant to denigrate the Jewish community and it’s two words and if that offends anyone unfortunately that’s the way it has to be.”

Senator Anning also targeted Muslims in his maiden speech, claiming all terrorists were Muslim, and many languished on welfare.

“Australia is the most successful multicultural society in the world built on a foundation of mutual respect. We reject and condemn racism in any form,” Mr Turnbull tweeted.

“There was hardly a group of Australians he did not offend unless you were very close to being a member of the Ku Klux Klan,” he told ABC radio.

Around 1942, the Nazi leadership established a plan called “The Final Solution to the Jewish Question”, which led to the mass genocide of Jewish people in occupied Europe.