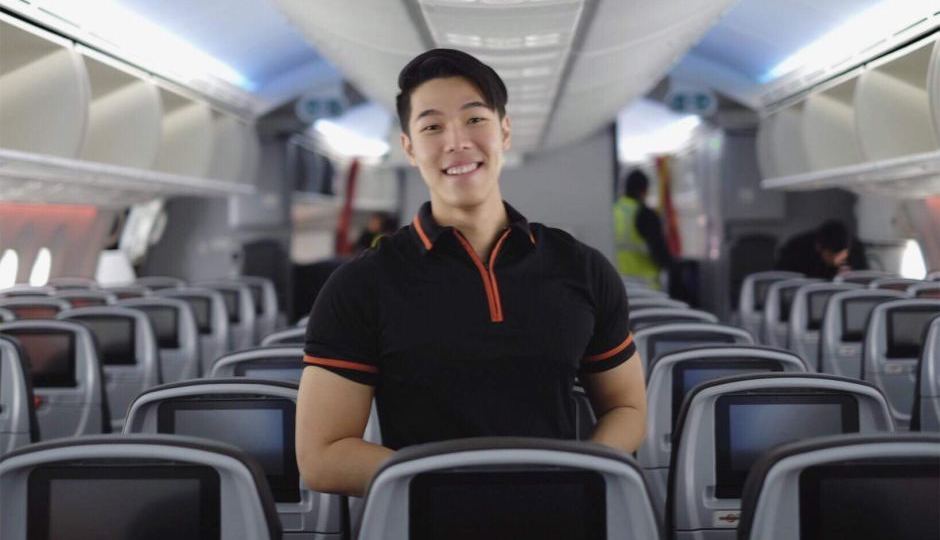 Budget airline Jetstar is under fire for using foreign cabin crews on Australian routes and paying them a base pay of as little as $100 a week.

The Thai-based cabin crew work on popular holiday routes on shifts lasting up to 20 hours and say they struggle to feed themselves on the amount they are paid.

Until he quit Jetstar two weeks ago, Pojchara Kosolchuenvijit was often flying between Bali and Australia.

“There are safety concerns because of the fatigue. The crew should be fit at all times. It’s the crew that would help the passengers in an emergency.”

‘We need enough money to live’

The salary of Bangkok-based cabin crew jumps to $13 an hour when they’re in the air flying, but Mr Kosolchuenvijit says to earn enough money, the crews end up spending a lot of time in Australia.

They are paid a travel allowance of about $60 per 36 hours they spend away from home, while local crews are paid about $128.70 per night, according to documents leaked to 7.30.

“We need to eat, and in order to eat we need money,” Mr Kosolchuenvijit said.

“If you have only $30, what can you eat for $30 each day in Melbourne? It’s nearly impossible.

“We had to sneak in pots and electric pans to cook instant noodles in the hotel. I know it’s forbidden, but we just had to do it.”

Mr Kosolchuenvijit says he is speaking out because the situation needs to change.

“I love Jetstar, but some things need to be fixed and if I don’t speak out, it won’t change,” he said.

“I know it’s part of the business model to have cheap labour, but we are human and it’s 2018.

“We don’t need discrimination, we need a fair working place. We need enough money to live.”

Jetstar declined to speak to 7.30 but in a statement said the employee arrangements were compliant with Australia’s employment laws.

“Our Thai-based crew take home on average $2600 a month, depending on seniority, which is five times the average monthly Thai salary.”

Pojchara Kosolchuenvijit agrees it’s a good salary, if the crews didn’t have to leave Bangkok.

“But in order to earn that much money you have to spend a lot of your time in Australia, where it’s far more expensive.”

Last month the airline also started using the cheaper foreign crews on a domestic route between Darwin and Adelaide, which some Jetstar staff say may be illegal.

Jetstar says it is doing nothing wrong because migration regulations allow the use of foreign crews on international “tag” flights, which is when a domestic sector is added to an international flight.

But a Jetstar pilot told the ABC there’s no way the Darwin-Adelaide return flights are international tag flights.

“All the passengers get on in Adelaide and get off in Darwin. They use domestic terminals, domestic ticketing and domestic security checks,” the pilot said.

Another pilot lodged a complaint with Jetstar after being rostered to work with a Thai-based crew on what he believes was a domestic flight.

“I thought it was odd that international-based cabin crew were able to operate a domestic sector,” he wrote in the complaint seen by 7.30.

“It sounds like these overseas workers are being put on a domestic flight because the company can get a commercial and cost benefit out of it,” he told 7.30.

“We have chronically fatigued, untrained workers who are struggling to rub two pennies together and that’s a deadly recipe.”

Jetstar rejected suggestions that the overseas-based crew were trained to a lower standard.

It also said it had to use foreign crews staffed on that route because of the “busy school holiday” period.

“The use of overseas-based crew operating tag flights across our network is extremely small,” a spokesperson said in a statement.

“Under the Migration Regulations as part of the Migration Act, this service is in line with the definition of a flight on which foreign crew may work, including that it must operate between declared airports (ie. Adelaide and Darwin).”

The reality of cheap airfares: Jetstar under fire over foreign crews’ pay and work