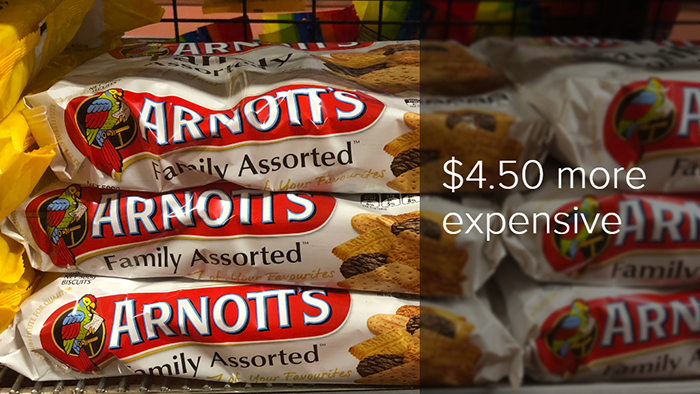 A jar of instant coffee in Doomadgee will set you back $27.63. Photo: ABC

How would you feel about paying $28 for a jar of instant coffee, $9 for a box of instant oats, or $16 for laundry detergent?

The “inflated” prices were recorded last month at remote stores in Queensland, many of which are run by a group controlled by the State Government.

“I’m angry because it’s very expensive and it just makes life so much harder,” he said.

“It’s not like you have choices either; you can’t just go to Coles or Woolworths.

“It’s an extra burden on each household and it’s not something we need.”

And it is not just food that costs more.

Unleaded petrol in Lockhart River was selling for $1.93 per litre and $1.89 for diesel – also at a store controlled by the Government.

Plastic container of Cold Power washing liquid on the Doomadgee supermarket shelf is $10.80 more expensive than in Brisbane.

“I feel it in my pocket every day,” Mr Butcher said. “I can’t justify the cost at the moment.”

ABC News selected 10 everyday items at the only supermarket in Doomadgee, in the Gulf of Carpentaria, and compared the prices with the same items at a major supermarket in Brisbane.

The total price of the products in the remote community was nearly double the cost of those in Brisbane.

Why are the prices so high?

The group running more than 20 of the remote stores across the state, Community Enterprise Queensland (CEQ), is a statutory body of the Queensland Government.

“It also assists communities to have access to “best buys” and “specials” and price matches with Coles, Cairns, on online products,” the spokesperson said.

“However, it must also be noted that there are still significant freight costs that have to be borne due to CEQ operating in very remote areas of the state.”

A recent productivity commission review recommended the Government divest itself of assets, such as retail stores, which can “crowd out” locals from business opportunities.

The Government took over the operation of most remote supermarkets in Queensland in 2016.

Mr Butcher said they were told there would be an improvement in prices, but the cost of some items had gone up.

“They said things would get better, but that’s a broken promise” he said.

“Because of the remoteness and lack of employment opportunities, they should consider more subsidies to make things affordable.”