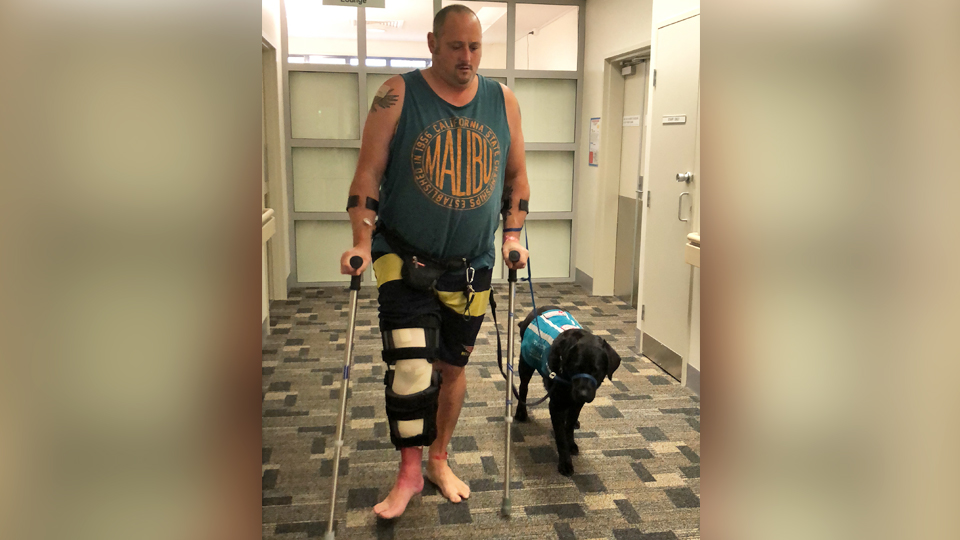 Ashley Smith, 43, will get the mobility scooter he needs thanks to a reader of The New Daily.

A Melbourne retiree has generously stepped up to offer a mobility scooter to a housebound veteran after the Department of Veterans Affairs refused his plea for help.

On Wednesday, The New Daily revealed the DVA had refused to provide a scooter to 11-year army veteran Ashley Smith, despite medical advice his housebound condition after undergoing knee surgery was exacerbating his post-traumatic stress.

The DVA argued that Mr Smith, who served in East Timor, was ineligible as his knee injury was not caused by his service — despite accepting liability for chronic PTSD, anxiety and depression, the treatment for which requires Mr Smith to have exposure to the outside world.

Moved by Mr Smith’s story, Wendy Westerveld, a pensioner in the Melbourne suburb of Wantirna South, came forward on Thursday to offer to cover the cost of renting or purchasing a scooter for the veteran.

“Every government department has its rules and it’s hard to bend them,” Ms Westerveld said.

“But I feel sometimes you just need to be practical and do what’s right without trying to get the red tape down. We are not wealthy or anything. This just touched me.”

Ms Westerveld, who has been in contact with Smith and a scooter supplier in NSW, said she believed veterans who serve Australia should receive all the support they need.

“I have great respect for people who give service to their country and feel they should receive support on all levels, mentally and physically, even after completing service,” she said.

“In this case, Ashley being mobile is important for his health and also his dog’s. A service dog is like a guide dog and needs to be bonded with their owner, which means walked by them too. Being on crutches would prevent his dog walking properly and being stuck would be harmful for Ashley’s rehab.”

The New Daily understands Mr Smith has received multiple offers of assistance from members of the public in the past 24 hours.

Mr Smith, who lives in Young, NSW with his wife and three children, earlier told The New Daily he had struggled with basic tasks like getting groceries before getting on the road to recovery last year with the help of his service dog, Leroy.

“Your friends would ask you to come out and do stuff and you would instantly say no because of the triggers that things would give me from my chronic PTSD and anxiety,” he said.

He was left feeling frustrated and let down by the DVA after putting his life on the line overseas, Mr Smith said.

“When you are serving in defence you get told regularly and also even during your discharge seminars that DVA will look after us no matter what and no matter the cost.”

The DVA and the office of Minister for Veterans Affairs Darren Chester both declined to comment on his case, citing privacy restrictions.