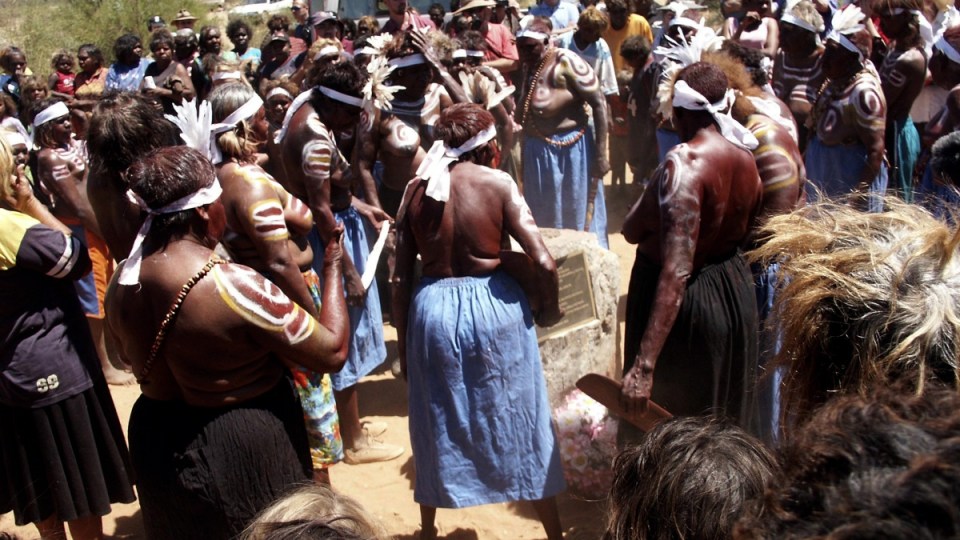 Women perform a traditional dance at the 75th anniversary of the Coniston Massacre at Brooks Soak. Photo: AAP

Tuesday marks 90 years since the last recorded massacre of Aboriginal people in Australia.

The murder of a white dingo hunter by a Warlpiri tribesman led to a spate of revenge killings of Aboriginal people in Central Australia in 1928.

Officially, 31 Aboriginal people died at the hands of Constable George Murray and other policemen who embarked on a vengeful rampage over the death of murdered dingo hunter Fred Brooks.

The mass slaughter of Indigenous Australians, which historians estimate could exceed well beyond 60, later became known as the Coniston Massacre.

The perpetrators were never charged nor convicted.

An official inquiry deemed the brutal killings of Aboriginal people, including women and children, were in fact justified.

Brooks, a 67-year-old white dingo trapper who worked at Coniston Station, north-west of Alice Springs agreed to supply a local Aboriginal man named Bullfrog with food in exchange for the chance to sleep with his wife.

Brooks failed to deliver on his promise to Bullfrog despite using his wife for sexual enjoyment.

On August 7, 1928, Brooks was killed in an attack by Bullfrog and his uncle Padirrka.

Soon after the murder, Brooks was found buried head first in a rabbit hole.

Constable Murray was called to investigate the crime but without thoroughly looking into the incident, instigated a killing spree of local Aboriginal people.

Almost a week after Brooks’ death, Constable Murray took with him eight men and ventured to a Walbiri camp near Coniston Station where they collectively shot 23 people, leaving two men and one woman, all unarmed, dead.

The following day, the group of policemen fired a hail of bullets at four Aboriginal men they spotted at Cockatoo Creek 30 kilometres from the Walbiri camp.

One man was killed while the others successfully fled the scene.

Another five Aboriginal men were shot dead by the so-called ‘Police Party’ a few days later.

On August 24,Constable Murray called off the killing spree and produced a report to the government, admitting he and his accomplices murdered a total of 17 Indigenous Australians, citing self-defence.

The court unanimously ruled the Police Party’s actions were warranted.

According to the Commonwealth Government in 1929: “If a massacre was intended, is it likely that Constable Murray would have dismounted from his horse on each occasion and alone gone amongst the natives at the risk of being killed, to effect arrests when all the party could have remained mounted and, from a distance of safety, wiped out all the blacks?”

But the retaliatory killings of Aboriginal people did not stop there.

On September 24,Constable Murray was called to investigate an incident at Coniston Station whereby John Morton, a pastoralist notorious for mistreating Aboriginal staff, was ambushed and assaulted by a group of Aboriginal men.

Instead of inquiring into the reported attack, Murray and Morton went on a three-week long punitive expedition.

Contrary to Constable Murray’s claim that they jointly killed 14 Aboriginal locals, residents believe up to 100 people were murdered within the space of three weeks.

A memorial plaque was unveiled in Alice Springs in 2003 to commemorate the victims of the Coniston Massacre, a haunting period still painfully felt by Aboriginal people today.

Ninety years on, no justice for Australia’s last Aboriginal massacre