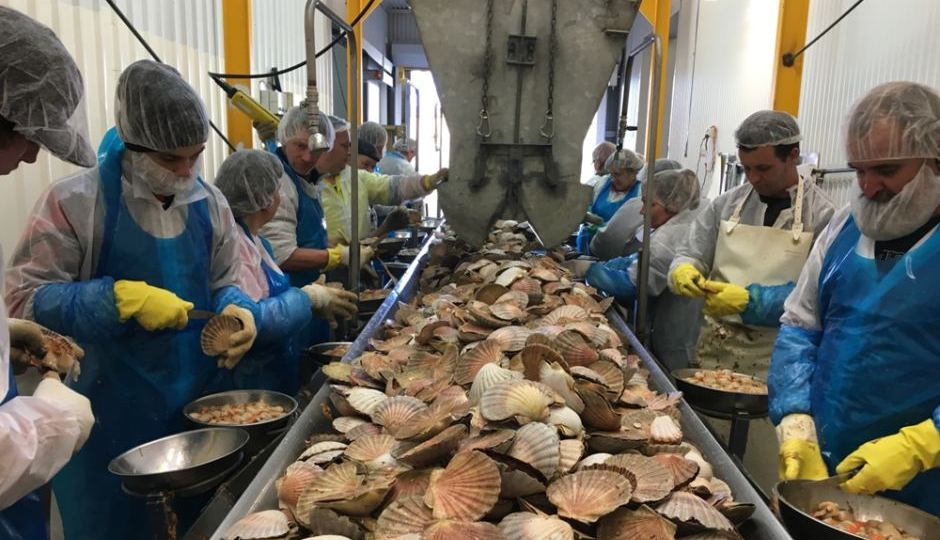 It's all hands on deck when the scallop season begins at George Town Seafoods. Photo: Hilary Burden

John Hammond is a pioneer of Tasmania’s scallop industry, with more than 50 years’ experience.

He has had concerns about marine seismic testing by oil and gas companies for about 10 years — since helping a seismic survey team in Bass Strait.

Seismic testing involves firing soundwaves into the ocean floor to detect the presence of oil or gas reserves.

Hundreds of sonic blasts measure the geology of the seabed in the hopes of finding oil or gas deposits.

“We were going along doing chase boat work, which is pulling the fishing gear out of the road so the ship can go through, totally unaware of the horrendous damage this operation does to our sea life,” Mr Hammond said.

He is not alone in his concerns.

Greens Senator Peter Whish-Wilson is pushing for a Senate inquiry into the impact of seismic testing on the marine environment and fisheries.

The senator said there are concerns in the Tasmanian and Victorian fishing industries and both commercial and recreational fishers in New South Wales.

“Given the fact that the seismic industry is embarking on a whole new set of seismic (tests) off the west coast of King Island … it’s long overdue to have an inquiry,” he said.

But the oil and gas industry said the practice is low risk, thoroughly regulated and involves extensive environmental checks and consultation with locals.

A difference of opinion on consultation

There is little Australian research around the impact of seismic testing.

A seismic survey planned for near King Island has recently been knocked back by federal regulator, the National Offshore Petroleum Safety and Environmental Management Authority (NOPSEMA).

NOPSEMA told the company Spectrum Geo to do more consultation and resubmit its application.

It is in the environmental planning stage, a process exploration manager David Briguglio said is lengthy and comprehensive.

“The government regulator has to approve before we can conduct operations like this, and it includes seismic and drilling of wells; any sort of operation in the offshore environment,” he explained.

Regardless of any inquiry, Mr Briguglio would like to see more support from the Commonwealth on how to consult with groups opposed to exploration.

“As an oil and gas operator we understand first hand, particularly in the south-east states of Australia, how significant the gas crisis is going to get,” he said.

“And the reality is that the exploration, particularly for natural gas, actually needs to occur, because otherwise we could be in a situation where we’ve got a significant shortage on our hands.”

Matthew Doman, from the Australian Petroleum Production and Exploration Association, said the relationship with the fishing industry is valued.

“The regulator of offshore petroleum activity, NOPSEMA, insists on very extensive consultation between our industries and the oil and gas industry is committed to doing that,” he told ABC’s The World Today.

They have joined forces with Seafood Industry Victoria to develop a mining, gas and petroleum consultation policy.

“I suppose in the last 12 months we’ve noticed that consultation practices from the gas and oil industry are fairly poor,” Mr Harrington said.

“We’ve certainly opened our eyes far wider than we have in the past for the impacts of seismic on seafood in Tasmania.”

Do we need an inquiry into how seismic testing impacts sea life?