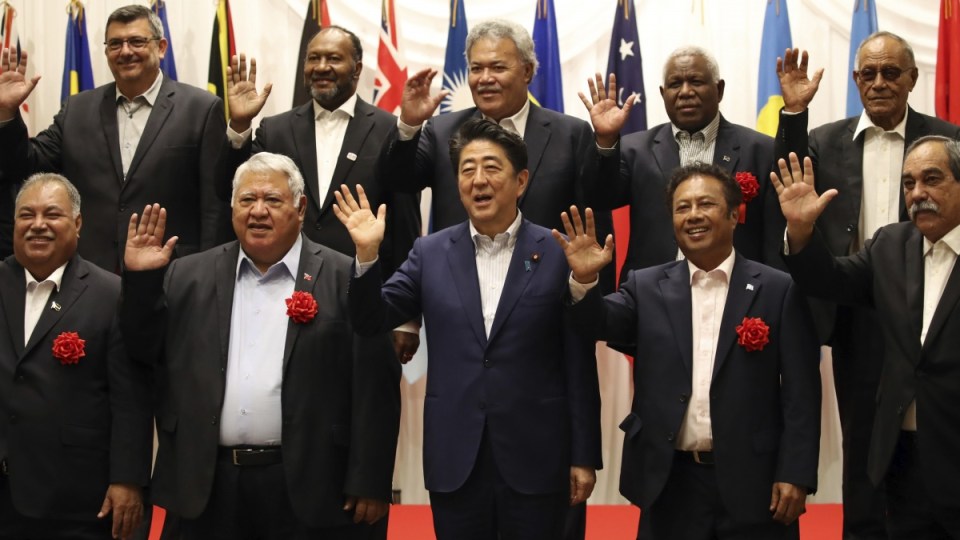 Press coverage could be minimal at the Pacific Leaders Forum, unlike May's meeting in Japan. Photo: AP/Yomiuri Shimbun
analysis

The Canberra Press Gallery’s protest that it would withdraw from media pool coverage of September’s Pacific Islands Forum in Nauru has become an ugly diplomatic incident.

And with freedom of the press ultimately at stake, it now appears that News Corp Australia – publisher of the The Australian, The Daily Telegraph, The Herald Sun and others – is the opportunist, hypocritically happy to abandon this first principle.

When the government of Nauru pointedly rejected an ABC camera operator from the gallery’s nominated three-person team, also including an Australian Associated Press reporter and photographer, to provide shared media coverage of the forum, the gallery president David Crowe issued a statement asking for Nauru’s pre-conditions to be reversed.

The New Daily understands that Mr Crowe canvassed views widely within the gallery, including News Corp journalists, before issuing a statement declaring: “If the ban is not reversed, the media pool will be disbanded. If one cannot go, none will go.”

The gallery was hoping that its statement would lead to a negotiated acceptance from Nauru that its nominees were appropriately accredited, in keeping with Australia’s press freedom tradition and its demonstrable independence from government.

While the gallery’s protest statement has been reported as a “boycott”, it has no industrial or legal standing as such.

And immediately there was a rat in the ranks of Australia’s free press. 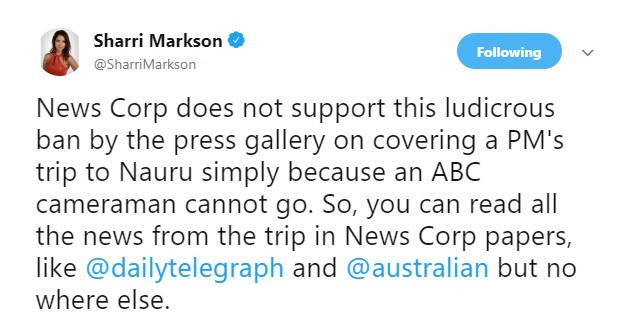 Media Alliance journalists’ president Marcus Strom told The New Daily: “The principle is clear. Politicians don’t get to choose who reports on them. That applies in Australia, in Nauru and around the world. When Clive Palmer excluded The Australian from covering his media events, we called it out.”

Mr Strom said that while media organisations were free to make their own arrangements to cover the Nauru forum, “if News Corp also chose to withdraw from the trip, it would send a strong message in favour of press freedom”.

Prime Minster Malcolm Turnbull’s office reportedly tried for weeks to persuade Nauru to accept the ABC camera operator as part of the gallery pool coverage, but without success.

Mr Turnbull has expressed regret at Nauru’s decision while acknowledging its sovereign rights.

Immigration Minister Peter Dutton, who has declared the ABC is “dead to me”, has denied having exerted any influence on Nauru to deny the ABC a visa for the forum.

Internationally, the New Zealand press gallery has supported the Canberra press gallery in its protest, with other regional media outlets deciding not to send reporters to the forum while Nauru maintained its ABC blackball.

The government of Nauru has effectively declared the ABC persona non grata, rejecting there has been any restriction on press freedom and slamming the ABC as arrogant, disrespectful and an “activist media organisation”.

Through a spokesperson News Corp has stated it would assign a reporter to cover the Nauru forum for its mastheads and dissociating itself from the Canberra press gallery statement.

News Corp’s perversity in this incident is revealing.

While the entire Australian media industry and its journalists stood with News against the 2012 move by the Gillard government to regulate the Australian print media for the first time after the Finkelstein inquiry, News has now stepped away from industry unity, exposing itself as the expedient pariah.

While News enjoys all the privileges that come with Australia’s tradition of press freedom, including its often-glaring partisanship (“Kick this mob out”), it is abandoning the principle for rivalry alone. What a rat.