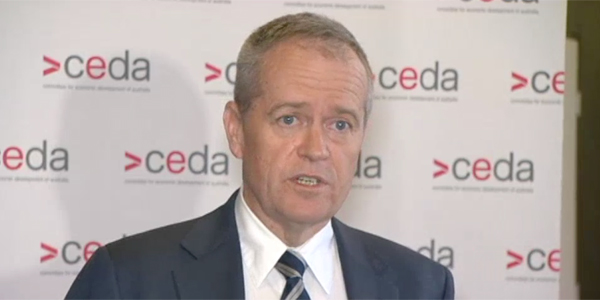 Malcolm Turnbull has accused Labor of risking millions of jobs with plans to reverse business tax cuts that Bill Shorten held up as proof of the Prime Minister being for the “top end of town”.

During fiery exchanges in Parliament on Tuesday, Mr Turnbull blasted Mr Shorten’s confirmation earlier in the day that a Labor government would repeal recent tax cuts for businesses with an annual turnover of between $10 million and $50 million.

“They say to thousands of family-owned small and medium businesses of the country, if he is elected prime minister, he will jack up their tax,” Mr Turnbull said during question time.

“That is what he wants to do. He will put at risk millions of Australians jobs.”

Mr Shorten hit back, saying the government was offering a “handout” to the big banks, which are under fire at the banking royal commission amid revelations of misconduct.

“Why is the government negotiating to give big business a handout after the byelections?” he said.

“Don’t voters deserve to know the truth, that this government is teaming up with One Nation to give the banks $17 billion?”

In a surprise move that offers voters a clear choice on tax ahead of the July byelections and next year’s federal election, Mr Shorten announced on Tuesday morning he would repeal already legislated tax cuts if elected prime minister. He would also consider restricting tax relief to businesses earning up to $2 million.

Accusing the Prime Minister of looking after the “top end of town”, the Opposition Leader said a Labor government would spend the saved revenue on healthcare, apprenticeships, the NBN, and measures to reduce energy prices.

“What we offer is a trained workforce, we will make sure that you will get what you need,” he said.

Shadow Attorney-General Mark Dreyfus downplayed reports that the announcement had not been brought to shadow cabinet, insisting there was no need as Labor had always opposed tax cuts for big business.

Business groups, meanwhile, expressed concern at Labor’s announcement. Australian Chamber of Commerce and Industry chief James Pearson described it as a “massive kick in the guts”.

“I would be reminding the public that almost nine out of every 10 jobs in this country are in business, the private sector,” he said.

“This is at a time when the rest of the world is looking to make it easier to invest and grow, including business taxes. Australia cannot afford to be the odd one out.”

Although a more far-reaching corporate tax plan has stalled in the Senate, the Coalition succeeded last year – with crossbench support – in passing a phased tax cut for businesses earning up to $50 million.

Businesses earning up to $25 million have already had their tax rate reduced from 30 per cent to 27.5 per cent. Those turning over $50 million or less are set to enjoy the lower rate from July 1.

Dr Graeme Orr, a political observer at the University of Queensland, said the current tax debate was “part of a realignment of party ideology”.

“The federal Coalition is leaning back to its conservative roots and Labor to its social democratic roots,” Dr Orr told The New Daily.

“Similar, if milder, than the polarisations we’ve seen in the US or Europe. It started with the Coalition’s turn to security/nationalism some 20 years ago; for Labor it kicked in after the great financial crisis, with a global concern with the destabilising economic and social effects of inequality.”