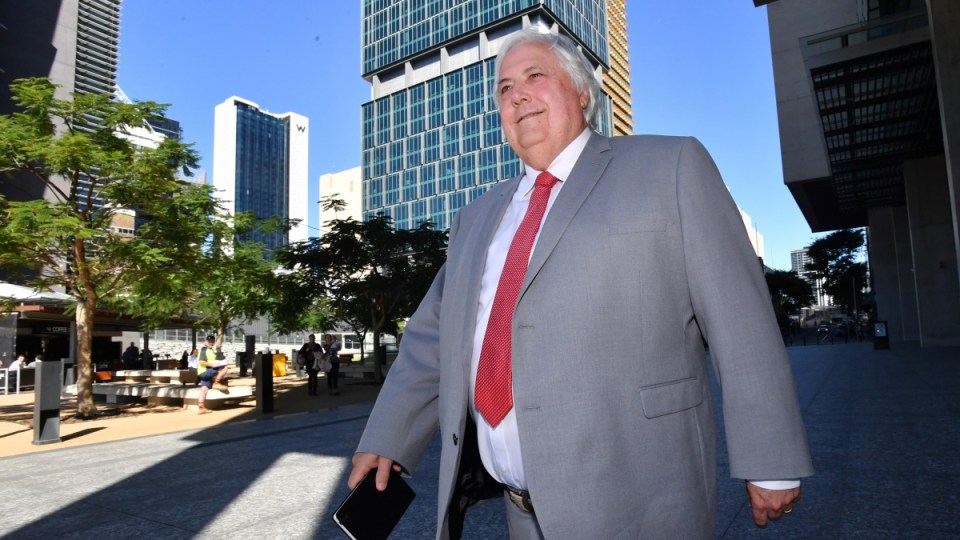 Controversial businessman Clive Palmer will shed light on his move back into the political arena on Monday as the Coalition trails Labor for the 34th consecutive Newspoll.

Mr Palmer, the federal member for Fairfax from 2013-16, announced on Sunday that the Palmer United Party had become the United Australia Party, and will contest the next federal election.

The mining magnate will make an announcement with the newly-named party in Canberra on Monday, according to an news alert.

The news came as former One Nation senator Brian Burston announced on Monday that he would join Mr Palmer’s new political party.

Senator Burston had been in talks with Mr Palmer for a week, after falling out with former ally Pauline Hanson.

“He’s making Australia great, I love that logo, and so am I,” Senator Burston told the Courier-Mail on Monday.

The party’s change of name comes just weeks after Mr Palmer denied starting a new political campaign by funding hundreds of bright yellow billboards around the country with the slogan “Make Australia Great”.

PUP was deregistered last year by Mr Palmer but he indicated this year he would resuscitate the party and stand candidates in all upper and lower house seats at the next poll.

However, he cannot officially register his new party yet because writs have been issued for five federal by-elections on July 28. That means the Australian Electoral Commission’s political party register is frozen, and Mr Palmer will have to wait until the writs are returned by about September 23.

Mr Palmer’s return to politics comes as the latest Newspoll reveals waning support for the One Nation party in a largely unchanged result.

Satisfaction with Prime Minister Malcolm Turnbull reached 40 per cent for the first time in two years but the coalition still trails Labor on a two-party preferred basis, the latest Newspoll shows.

The poll, published in The Australian on Sunday night, showed the two-party preferred stakes are unchanged with Labor leading 52-per cent to 48.

Mr Turnbull continues to lead Bill Shorten as preferred prime minister, 46 per cent to 31 per cent.

The poll also reveals One Nation took a hit in its primary vote – which fell from eight to six per cent – following a public spat between leader Pauline Hanson and Senator Brian Burston.

Mr Palmer claims the “re-establishment” of a UAP, which former prime ministers Joseph Lyons and Robert Menzies once served under, was a significant milestone in Australian political history.

“All Australians are tired of our current crop of politicians,” he said in a statement Sunday.

“It is time to unite the country for stronger economic growth that can restore prosperity to all our citizens.”

Senator Burston resigned from One Nation this week over a dispute about company tax cuts after Ms Hanson publicly called on him to consider his position.

But he insists One Nation is the only party pursuing issues like coal fired power stations and multinationals who don’t pay tax.

“I think we’ll get back into the game,” he told Sky News on Sunday.

“Politics has a long way to go yet.”

The Greens gained one point, with their primary vote sitting at 10 per cent.

The poll covered a period that heavily featured a scandal involving former deputy prime minister Barnaby Joyce, who was criticised by some colleagues for conducting a paid interview about the birth of his son to former staffer Vikki Campion.