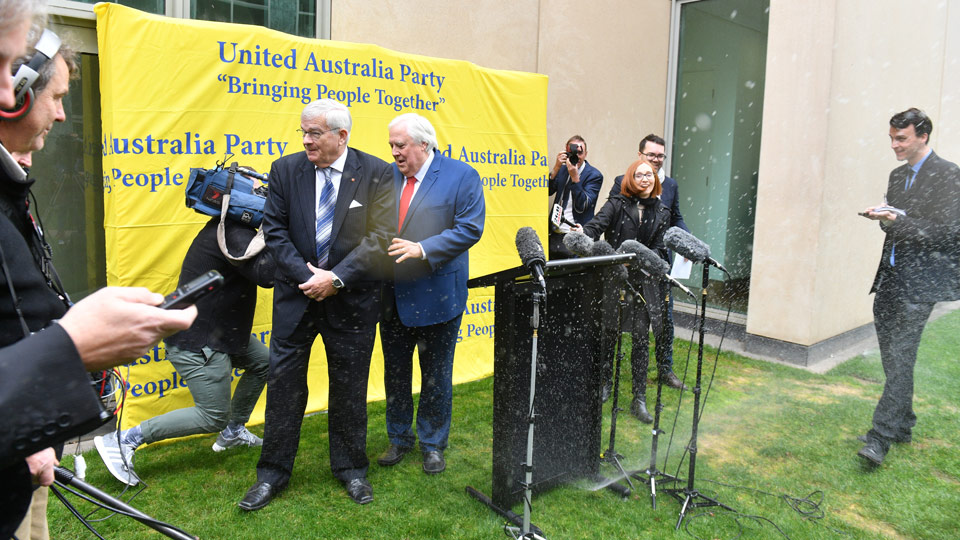 Clive Palmer has marked his return to politics by clashing with reporters over “fake news” and his allegedly shonky business dealings, only to retreat early when a parliamentary sprinkler drenched his big launch.

During the fiery media conference, Mr Palmer fended off a barrage of questions about money owed to axed workers at his mothballed Queensland Nickel refinery.

“People up in north Queensland wouldn’t spit on you if you walked past. Why should they believe you today?” a reporter asked.

Mr Palmer flew into a rage, saying the accusations were untrue and that he was the victim of biased journalism, in an echo of US President Donald Trump.

“Why don’t you be a reporter and report what’s happening instead of thinking you are the person who makes the news.”

Earlier, the reporter had asked: “So the whole community are wrong about you?”

“Yeah that’s right,” Mr Palmer replied, to gasps from those nearby. “And that’s partly your fault in the media for not reporting things.”

The businessman and former politician had hoped to concentrate on his launch of the United Australia Party, but the media conference diverted again when he announced Senator Brian Burston, formerly of One Nation, had joined United Australia.

Early on Monday, Senator Burston had informed the upper house he would sit as an independent.

Less than an hour later, he appeared with Mr Palmer at the media conference to confirm speculation he was joining United Australia.

Asked whether he had misled Parliament, Senator Burston claimed he had decided to join the rebadged United Australia only after addressing his chamber colleagues.

“Round about 10.30 [am],” Senator Burston said when asked when he had made the final decision.

“Do you really expect the public to believe that?” a reporter asked.

“Yes I do,” the Senator replied.

The media conference was cut short when a sprinkler system switched on.

Despite the launch, Mr Palmer cannot officially register his new party yet because writs have been issued for five federal byelections on July 28. That means the Australian Electoral Commission’s political party register is frozen, and Mr Palmer will have to wait until the writs are returned by about September 23.

Because of Senator Burston’s defection, Mr Palmer will not need to prove he has 500 members in order to register his party.

Treasurer Scott Morrison didn’t mince his words on Mr Palmer’s plans to resurrect his political career and contest the next election.

“Look, I think people out in Australia would say, the circus doesn’t need another sideshow,” Mr Morrison told ABC radio.

“We now know what he’s like; he’s driven every business that he’s ever run into the ground, the money he’s made has all been made by wheeling and dealing, not by building businesses up from scratch,” Mr Abbott told 2GB radio.

“The last thing we need are more spivs in the Parliament.”