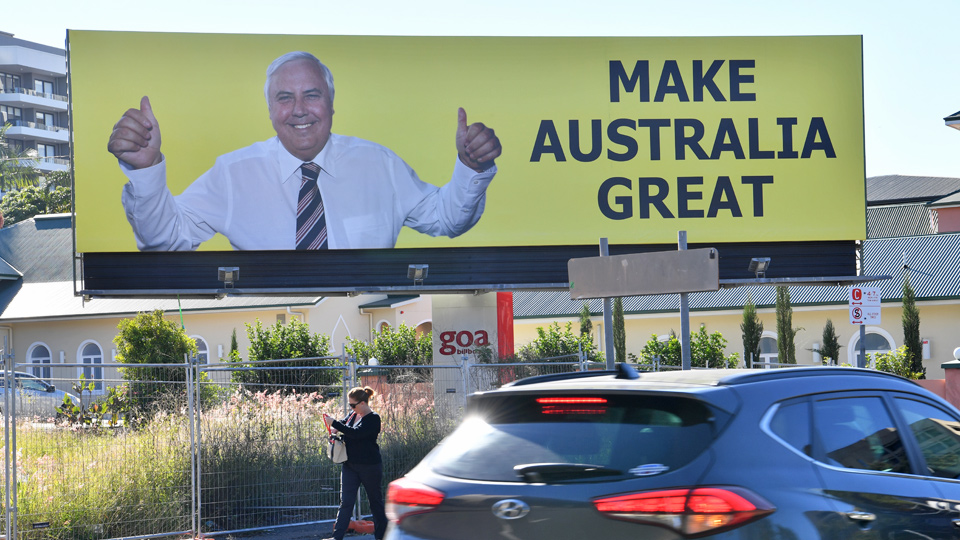 A billboard featuring the businessman and former politician appeared in Woolloongabba, Brisbane in May. Photo: AAP

Controversial businessman Clive Palmer has announced a move back into the political arena by changing the name of his deregistered party.

Mr Palmer, the federal member for Fairfax from 2013 to 2016, says the Palmer United Party has now become the United Australia Party, and will contest the next federal election.

The change of name comes just weeks after he denied starting a new political campaign by funding hundreds of bright yellow billboards around the country with the slogan ‘Make Australia Great’.

PUP was deregistered last year by Mr Palmer, but he indicated this year he would resuscitate the party and stand candidates in all upper and lower house seats at the next poll.

The mining magnate claims the “re-establishment” of a UAP, which former prime ministers Joseph Lyons and Robert Menzies once served under, was a significant milestone in Australian political history.

“All Australians are tired of our current crop of politicians,” he said in a statement.

“It is time to unite the country for stronger economic growth that can restore prosperity to all our citizens.”

Mr Palmer is currently locked in a court battle with liquidators of his Queensland Nickel company, with Justice John Bond ordering a freeze on more than $200 million of his assets, and on more than $340 million in assets held by his companies.

Mr Palmer’s UAP announcement comes 10 days after he said he would reopen the mothballed Townsville nickel refinery, claiming he had plenty of cash to do it.

Mr Palmer said his companies had almost $500 million in cash reserves and he would use some of that to restart the plant where 800 workers lost their jobs.