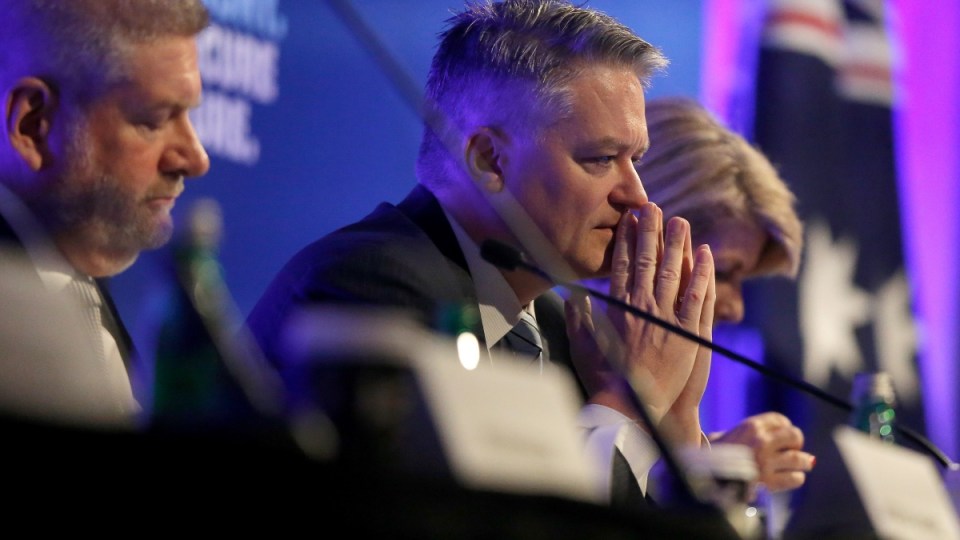 Finance Minister Mathias Cormann and Communications Minister Mitch Fifield at the Council of the Liberal Party in Sydney. Photo: AAP

Liberal Party members have urged the Turnbull government to privatise the ABC, a move one crossbench senator has branded a confirmation of a government “secret plan” to sell off the public broadcaster.

The motion is not binding and is unlikely to become government policy, but the 2:1 vote among 100 MPs and party members in Sydney on Saturday has been considered a barometer of Liberal Party mood toward the public broadcaster.

“Malcolm Turnbull’s secret plan to privatise the ABC has been revealed,” Greens Senator Sarah Hanson-Young said in a statement.

“First it was doing a secret deal with Pauline Hanson’s One Nation to ‘whack off’ money from the ABC’s budget, now this.”

No party members spoke in opposition to the motion to sell the public broadcaster.

Council delegate Mitchell Collier, the federal vice-president of the Young Liberals, said there was no economic case for keeping the ABC in public hands and that “high sentimentality” was not a justification for retaining public ownership.

His motion stated: “That federal council calls for the full privatisation of the Australian Broadcasting Corporation, except for services into regional areas that are not commercially viable.”

He reportedly suggested it could be sold to a “media mogul, a media organisation”, or it could be floated on the stock market.

“Privatising it would save the federal budget $1 billion a year, could pay off debt and would enhance, not diminish, the Australian media landscape,” he told the conference.

The council also voted by a margin of 43 to 37 to move Australia’s embassy from Tel Aviv to Jerusalem, mirroring the decision by the Trump administration earlier this year. That proposal was opposed by Foreign Minister Julie Bishop.

Communications Minister Mitch Fifield reminded the meeting that privatising the ABC was not government policy, according to Fairfax.

“We do have a range of measures that we’re seeking to implement to enhance the efficiency, the accountability and transparency of the ABC operation,” Mr Fifield said.

Independent public broadcaster campaigner ABC Friends vice-president Peter Monie told The New Daily he was shocked nobody at the Liberal Party council spoke against the motion.

Mr Monie said while Senator Fifield had stressed the Liberal Party’s policy was not government policy, the senator was certainly not considered to be a “friend of the ABC”.

The government’s 2018 budget included a freeze on the ABC’s annual funding indexation for three years from July 2019, shaving $84 million from the organisation.

Mr Monie said the Australian public was already angered by the cuts and said the vote could seriously hurt the Liberal Party at the next election.

“We’re upset this is just further staging in what seems to be an unrelenting attack on the ABC,” Mr Monie said.

“I think Malcolm Turnbull can win. I think things are going better now than they have been for the last six months,” Mr Howard said, according to the ABC.

“I am greatly encouraged about the future of the Liberal Party.”

A survey by the left-leaning Australia Institute of 1557 Australians found 60 per cent agreed the ABC needed a “boost to long-term funding”.

The New Daily contacted the office of the Communications Minister.