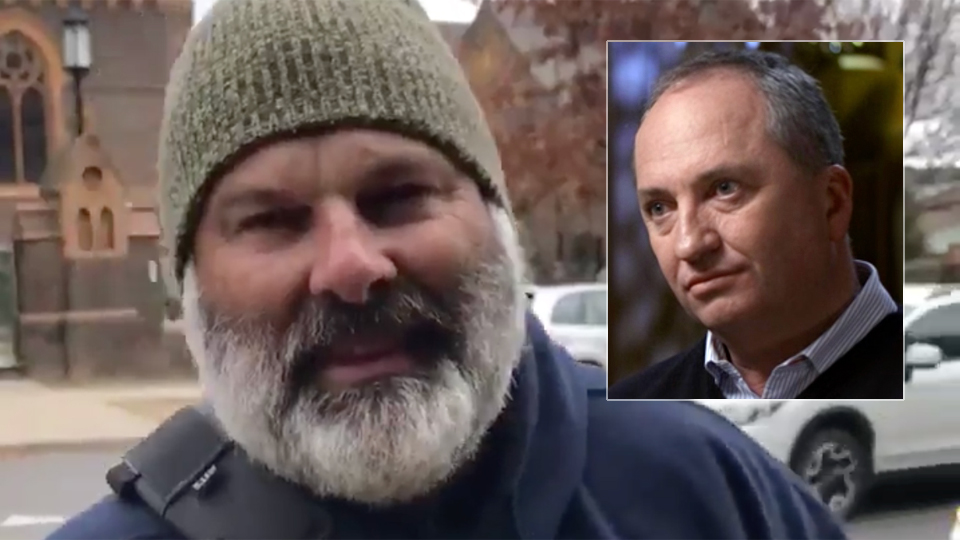 Barnaby Joyce was livid when the photographer began shooting outside the church. Photos: Twitter / Channel Seven

A photographer has accused former Nationals leader Barnaby Joyce of threatening to punch him during an ugly verbal confrontation outside a Catholic church in Armidale.

Mr Joyce posted videos of the encounter on social media, accusing the photographer of trying to ambush him.

“Coming out of church, guess who is hiding in the bushes taking photos, yet won’t give his name or who he works for,” he tweeted.

The Nationals MP has complained that the media have been constantly harassing him since he quit as deputy prime minister over his relationship with his former staffer Vikki Campion.

In one video, Mr Joyce repeatedly demands the photographer say who he works for.

“Why do you keep following us around with your camera? Who do you work for?” Mr Joyce asked.

The photographer would not give his name or say who he worked for, insisting he was just doing his job.

And he accused Mr Joyce of intimidation.

“How can you seriously come out of church and size someone up to punch them?” the photographer said.

“I didn’t size you up to punch you,” Mr Joyce responded.

“Yes you did, you pulled your right hand back and if I hadn’t actually walked away you would have clubbed me,” the photographer said.

“Go back to your regular job as a bouncer.”

Mr Joyce keeps following the photographer in the video, repeatedly demanding that he give his name.

A local also confronts the photographer, accusing him of hiding behind a tree “like a snake”.

“Don’t get a photo of the bloke! Can’t a bloke even come to church to pray to God. Leave us alone!” the man said.

The Nationals MP said one of the reasons he gave the interview was to stop the media from constantly harassing him.

Mr Joyce is angry that photographers are continuing to pursue him.

“We did the Sunday program to stop this. This is why we need a tort of privacy,” he tweeted.

Photographer: Shutter-bugged Barnaby Joyce threatened to punch me outside church