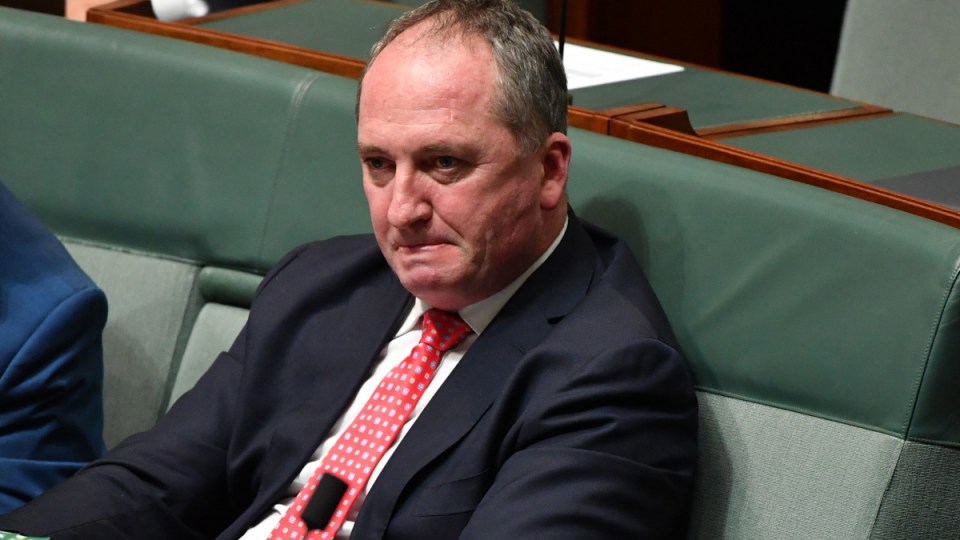 While some nationals have expressed support, others were angered by Mr Joyce's tell-all interview Photo: AAP

Barnaby Joyce has defended his choice to give a tell-all television interview, but said the decision to accept a $150,000 fee was made by his former staffer and now partner Vikki Campion.

As senior government ministers turned the heat up on Mr Joyce, the former Deputy Prime Minister said the couple’s attempts to live in privacy had failed and that Ms Campion was being “screwed over” by the constant media attention.

Commenting after Kelly O’Dwyer said Australians were “disgusted” by his decision, Mr Joyce said the couple had tried “everything” but had to deal with drones being flown over their home and were being hounded by paparazzi.

“Remember there are other people in this interview being Vikki and Seb, so if it was just an interview with me as a politician, sure, I am not going to charge for that,” Mr Joyce told The Australian.

“But that is not what they wanted, they wanted an interview obviously to get Vikki’s side of the story and like most mothers she said: ‘Seeing as I am being screwed over and there are drones and everything over my house in the last fortnight, paparazzi waiting for me, if everybody else is making money then (I am) going to make money out of it’.”

Ms Campion has not spoken since the scandal broke, aside from giving one quote during a sit-down interview Mr Joyce gave to Fairfax Media while he was fighting to stay on as Deputy PM.

On Tuesday, Mr Joyce confirmed the money would go to his six-week old son Sebastian, following reports it would be placed in a trust for the child.

He also said there was a case for toughening privacy laws, which he wanted to discuss with the Prime Minister.

His comments came after his Nationals colleague, Veteran’s Affairs Minister Darren Chester, suggested politicians should be banned from accepting cash for comment.

Mr Chester did not criticise Mr Joyce directly, saying the situation was unusual, but also said the former Deputy PM could no longer claim his privacy was being breached.

Ms O’Dwyer said in multiple interviews on Tuesday that most Australians were “pretty disgusted” by the upcoming Sunday Night interview, which Channel Seven confirmed would air this weekend.

“Ultimately it’s a matter for him and his judgment. I personally wouldn’t do it, I don’t think it’s right, and I think most Australians are pretty disgusted by it,” Ms O’Dywer told ABC radio on Tuesday, adding that the interview was a mistake.

Asked if the saga would cause backlash for the government, Ms O’Dwyer told Sky News: “I think these decisions are decisions taken by individual members, and that’s a question you might want to put to him”.

Members of the government are privately furious about the interview but have previously declined to criticise Mr Joyce publicly.

Prime Minister Malcolm Turnbull, who enraged Mr Joyce at the height of the affair scandal by saying he had “appalled all of us”, said he would raise the issue privately with his former deputy.

“It’s not something that I would have encouraged him to do, in fact quite the contrary,” Mr Turnbull told Tasmanian radio station LAFM on Tuesday.

Mr Chester, who was dumped by Mr Joyce from cabinet in December, said he would discuss the proposed ban with colleagues.

“This is unprecedented in my time in Parliament and I’m open to the conversation about banning MPs from benefiting personally from selling stories to the media,” Mr Chester told The Daily Telegraph.

Labor deputy leader Tanya Plibersek said she did not believe a ban on politicians receiving cash for comment would work, likening it to a prohibition on sleeping with staff.

“If common sense and common decency don’t tell you that these things are the wrong thing to do, I don’t think a ban is going to fix the problem,” Ms Plibersek told reporters.

Special Minister of State Mathias Cormann also said on Monday he did not support a ban.