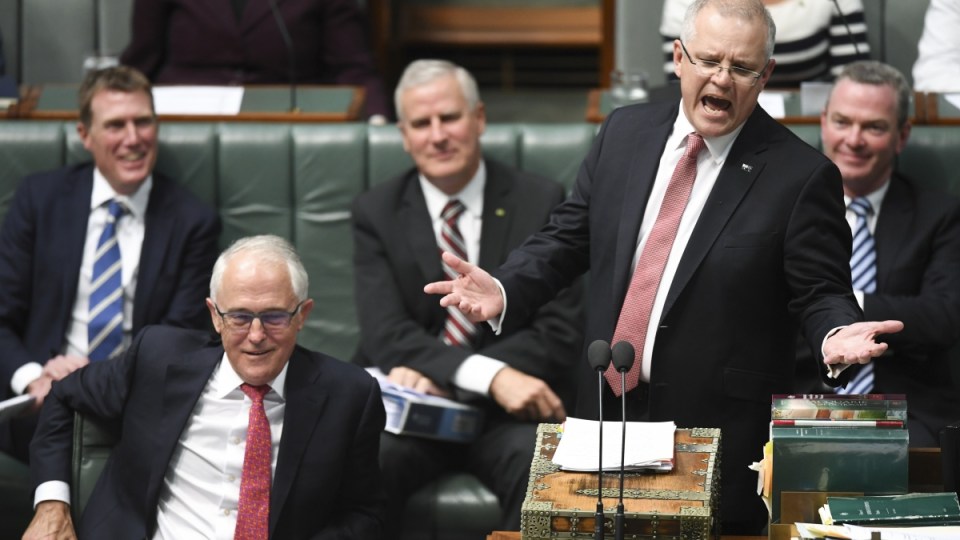 The government's tax plan sailed through the lower house on Wednesday. Photo: AAP

The Turnbull government’s contentious “flattening” of the nation’s tax system will cost more than $40 billion, Scott Morrison has confirmed, as the Treasurer’s personal income tax package passed the lower house.

The cost had remained a mystery until Mr Morrison provided more details during a feisty debate in Parliament on Wednesday night.

But that measure only commences in 2024-25, meaning it is significantly more expensive than the first two parts of the package, which Labor broadly supports.

Until Wednesday, Mr Morrison had only provided the four-year and 10-year cost of the entire package, which obscured the size of the third phase – a sweeping tax cut that mostly benefits wealthier Australians.

The other measures – yearly tax cuts up to $530 for low and middle income Australians and changes to income thresholds to limit bracket creep – are worth $102.35 billion collectively over a decade.

“So that sets out the costs of step one, step one and step one of the plan. I think it demonstrates the proportions,” Mr Morrison told Parliament.

The $40 billion figure is useful for the opposition because if it chooses to oppose part three of the income tax package, it would likely claim to bank that revenue for other commitments, as it has done with the government’s company tax package.

The government would argue, as it has done on company tax cuts, that those measures will not come into effect until beyond the forward estimates, meaning Labor’s costings are not credible.

The Treasurer did not provide a year-by-year cost breakdown on Wednesday night, but the opposition will attempt to extract those figures from Treasury officials at Senate estimates hearings next week.

“Over the medium term, over a full-year period, the Treasury will advise, of course, that there are swings and roundabouts that happen with forecasts and assumptions that you make,” he said.

On budget night, Mr Morrison had said the total 10-year cost was $140 billion, about $3 billion shy of the more accurate figure he provided on Wednesday.

Despite the additional details, Shadow Treasurer Chris Bowen called on the government to provide a year-by-year breakdown of the cost to the budget.

“We know the information exists, because the Treasurer has provided tonight for the first time, a total medium-term cost of the package,” Mr Bowen said.

Labor voted with the government to pass the entire package on Wednesday evening, but did so to avoid the charge it had voted against tax cuts for low and middle income Australians.

It will attempt to “split” the bill in the Senate so the first tranche of tax cuts, which have broad support across the Parliament, can be put to a vote.

“I say this very clearly to the government, ‘Do not hold the 2018 tax cuts hostage to the 2024 tax cuts. Do not say that to the Australian people’,” Mr Bowen said.

Labor has lashed the third phase of the tax plan as radical and questioned its fairness, but has stopped short of confirming it will oppose the proposal.

The government has refused to split the bill and voted against a Labor push to do so on Wednesday night.

Mr Morrison argued the package must be legislated as a whole.

“We’re talking about a seven-year plan. They can’t even commit to tax relief over seven years, let alone 10, but they will commit to expenditure forever,” he said.

Independents Andrew Wilkie and Cathy McGowan opposed the bill, as did the Greens, who argue the package would undermine funding for public services.

Mr Morrison has set a July 1 deadline to pass the package so 10 million Australians to receive a cash refund when they file their tax returns next year.